Friday Food: Still Solo and Not Loving It

Long version: The most notable thing about this unexciting meal was that A. arrived home from his week-long absence just as I was dishing it up, so he ate with us. Everyone was very excited. They also appreciated the radishes he had picked up at the excellent produce store along the way (along with lettuce and apples for me, because he still loves me and doesn't want me to die from e. coli caused by infected western-grown lettuce).

Long version: The lack of electricity wasn't going to stop me from celebrating Cinco de Mayo, dammit.  I ALWAYS celebrate Cinco de Mayo, even if it's in the lamest way possible. I had already purchased some limes and two avocados--which at $1.50 EACH should at least have had some gold filigree on the skins or something. I was ready. And I have a propane stove and a grill. Who needs electricity?

So! I seasoned two London broil steaks with lime juice, chili powder, garlic powder, cumin, and salt about an hour before I had A. grill them for me. He also warmed up the corn tortillas (wrapped in foil) on the grill.

I sliced the meat thin for the tacos, and everyone could choose among grated cheese, salsa, sour cream, diced shallot, lettuce, pieces of lime to squeeze, and the incredibly expensive avocado for their toppings.

I cooked the sweet potatoes on the stove in olive oil, then took them out and cooked the asparagus in the same pan with the same olive oil. Reducing dishes is paramount when you're without running water.

You know what else lime is good for besides seasoning tacos? Seasoning gin. Feliz Cinco de Mayo!

Right before we left at 3:30 p.m. I made hamburgers and wrapped them in foil. They were still warm when we ate. To the picnic bag (I don't own anything so fancy as a dedicated picnic basket, probably because I don't really like picnics personally) I added some bread to make the hamburgers into sandwiches, a random bag of take-out ketchup packets and plastic utensils from a restaurant meal with my parents months ago that I kept meaning to throw away because when will I ever use them (now, it turns out), and two treats purchased at the grocery store that morning after church: Fritos and Fruit Roll Ups.

Did you know that Fruit Roll Ups now come with designs on them you can press to your tongue to make a tongue tattoo? They do. It's gross.

We need a random photo break, right? Let's travel back in time to December of 2016. 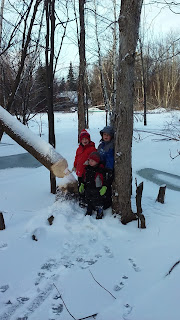 Three boys and a beaver pond. They love making Fruit Roll Up tattoos on their tongues. Ew.

Long version: This was the day after I finished three weeks of the elimination diet, and the very first thing I re-introduced was eggs. Thus, I had two fried eggs for breakfast and scrambled eggs for dinner. Let me just tell you how nice it was to not be begrudgingly chewing leftover meat first thing in the morning. VERY NICE.

The boys had the tuna patties. Except Charlie, who only ate rice because he went outside just before dinner and discovered the remaining Fritos in the car where I was keeping them for purposes of bribery during future baseball games/practices. He covertly ate them all and then mysteriously wasn't hungry for dinner.

His meal of rice and Fritos seemed to give him enough energy for his baseball game after dinner, though. Elite athletes, take note.

Long version: Yup, another one of those gross chicken leg dinners. I filled up two sheet pans with the chicken and other stuff from the fridge (sweet potatoes, mushrooms, onions, carrots), and heated up the leftover rice in the chicken juices.

And then we all went to a baseball practice. And a playground. Because that is now our life.

Long version: I purposely made the big pan of chicken Tuesday to have leftovers for this very meal. It was over 80 degrees again, and we had two baseball games at 6 p.m. at different fields for which I was, again, the sole parent/chauffeur. I just felt the simpler I could make meal preparation and clean-up, the better for my already challenged mental state.

I made most of the chicken into curried chicken salad, basically by making this dip and mixing it with the diced chicken and some finely diced shallots. I understand some people put grapes in this kind of chicken salad. I did not.

Cubby loves both curry and chicken salad, so I knew he would love it. Charlie loves neither of those things, so I saved some of the chicken for him to have a plain chicken sandwich with just butter on the bread. Jack ate a curried chicken salad sandwich. I ate the plain chicken in a salad.

Poppy watched us all eat with great interest, but no actual food. Soon, my girl. Soon.

Long version: Who cares what we had for dinner? A. finally came home and we didn't have any baseball activity after dinner. Ribeye steak was just a bonus.


During every terrible period of sleep with a baby--or rather, lack of sleep--there is always the hope that maybe this will be the night the baby sleeps. You never really know when it will happen, you see. You become accustomed to going to bed anticipating being awake every two hours during the night, and getting up in the morning requiring you to literally pry your eyelids open with your fingers.

Or rather, I get accustomed to that. Resigned, even.

But I also know--this not being my first, second, or even third child--that there will come one miraculous night when I will wake up several hours after going to sleep, totally disoriented because it has not been only two hours since the last time I had to haul my desperately exhausted body out of bed to care for a baby. You just never know when that night may come.

But that night does always come. For Poppy and her itchy, fussy, eczema-caused loooong stretch of bad sleep (about three months long, God help me), it came last night. I went to bed at 9:30 after nursing her and didn't wake up until 3 a.m.

It took me a minute to realize that yes, it really was 3 a.m., and no, I really had not been up in the previous 5.5 hours. I fed her and she fell back asleep again until 6 a.m.

There is nothing that compares to the relief of getting at least almost a full night of sleep after months of bad nights.

I'm assuming that the fact that her skin is almost normal is the reason for this. I don't know exactly what to credit for the vast improvement in her eczema. Three things happened at once that could be it: I came to the end of my three weeks of avoiding the commonly allergenic foods; I started using a new kind of emollient recommended by a Canadian doctor friend of A.'s; and I got some prescription-strength cortisone cream from our pediatrician. It could be any one of those things, or any combination of them.

It doesn't really matter, though. What matters is that Poppy is happier and sleeping better*. And so am I. Alleluia.

(I would post a photo of the happier and significantly less red baby here, except I seem to have lost my cell phone and thus, my only camera. Swell.)

* Though I should really shut up about it, because it was only one night and I have probably jinxed myself now.

Labels: all about me, baby stuff, Poppy, randomness

A. To the Rescue


A. arrived home on Friday evening, blowing in the door with a big thunderstorm, which turned into a nasty and prolonged windstorm. He ate dinner with us and helped put the kids to bed, and then the power went out.

Jack flipped out about the sudden lack of nightlight and A. sat with him in his room until he fell asleep. Meanwhile, I got some water for Cubby and then helped him find his bed again in his windowless laundry room-bedroom when he went back to bed. And nursed Poppy when she woke up.

And this is why single motherhood is such a daunting prospect. I'm way too outnumbered by these kids.

The power was still out in the morning, with no estimated time of repair by the power company. Something like 30,000 people were without power. It was a big, damaging storm. So damaging, in fact, that a three-foot section of our roof shingles was flopping about in the still-blowing wind. So after going to the dump, A. went to the hardware store and got roofing tar and roofing nails to patch it.

Technically we should just call the landlady so she can send someone to fix stuff, but out here in the boonies that's easier said than done. It's hard to get people to come out here. So A. climbed up on the roof and fixed it to ensure that we wouldn't have leaks in our kitchen ceiling when it rains.

It was such a nice reminder of how much he loves roofing. Although this roof was significantly less deadly than the roofs at Blackrock.

In addition, he hauled several five-gallon buckets of water from the creek in the woods so we could flush the toilets, wash hands, and do the dishes.

I have serious issues with waking up to a dirty kitchen, to the point that I will boil pots of water and do dishes without running water. Which I did last night.

He also took all four kids for a walk so I could take a desperately needed nap, took the three boys to the playground, and grilled our Cinco de Mayo steak for tacos on the grill.

The power came back on at 8 p.m. That's almost 24 hours without electricity. It would have been a much harder 24 hours if A. hadn't been here with us. 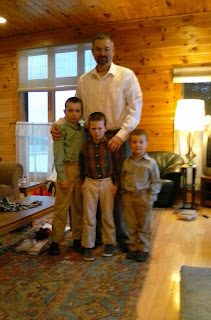 This photo is from the night of A.'s baptism. Despite the boys' expressions, they really do love their Daddy.