Cubby and I were sitting on the couch yesterday, hanging out while he digested his most recent meal, when I heard the unmistakable snarling that meant the dogs were killing something large. So I hauled us both up off the couch (a task that's getting harder and harder as the child expands) and looked out the window just in time to see Otty running across the front lawn with a woodchuck in her mouth and Leda in hot pursuit. Leda was no doubt hoping she could wrestle this delectable prize away from Otty and have a good ole chew.

Later in the day, Mia sauntered over to Cubby's chariot* with the back half of the woodchuck in her mouth, apparently considering it her duty to feed the newest member of the pack some nice nutritious meat instead of this milk garbage. I thanked her kindly and called A. over to dispose of the woodchuck ass by flinging it into the gully with a pitchfork. I then took the opportunity to explain to Cubby that this is why we don't kiss the nice doggies on the mouth.

He can never learn too early.

* As was suggested by several people, I believe Cubby was running a low fever yesterday that made him colder than usual. We put him in his Cubby Bear suit (over his already-warm fleece sleeper) and he immediately went to sleep and stayed asleep for a few hours. He's better now. Which means he was bright-eyed and raring to go at 4:30 this morning. Whee.
Posted by Kristin @ Going Country at 6:37 AM 7 comments:

The once-beloved chariot no longer placates the little dictator.

This is not good.

P.S. In addition, I just spent an entire hour scrubbing the bathroom, and it still looks like shit. Goddamn mildew.

P.P.S. I'm in a very swear-y, complain-y mood today, aren't I? Feel free to join me in my swearing and complaining if the negative spirit should move you.
Posted by Kristin @ Going Country at 6:47 AM 7 comments:

Of Potatoes and Satan

We took Cubby to the doctor yesterday for a weigh-in (13.5 pounds--pass the peanut butter on bread, please) and vaccinations. He wasn't too bad during the vaccinations. I mean, he screamed of course, but then, so would I if someone was shoving three six-inch needles into my legs. He stopped screaming relatively quickly, however, and then fell asleep. Then we got home. And he woke up. And OH MY GOD, the shrieking. I began to wonder if they had injected him with some substance to transform him into the spawn of Satan. I think he just had a low fever, though, and wasn't feeling particularly well. It only lasted a couple of hours, but that was DEFINITELY enough.

And speaking of Satan, thank God (you see the connection? TOTALLY makes sense) the MiL drove up to Lake Placid on Tuesday to the Cornell potato farm to get our seed potatoes. Not only am I glad to have potatoes to plant, but she always gets way too many, so we can eat them. And after three whole weeks of nothing but one bag of store potatoes the MiL brought home--which were mealy and tasteless and so vastly inferior to our delectable tubers that they should be called faux-tatoes--we had some of the Bake Kings last night and I entered Nirvana.

Ingenuity Is Ever My Watchword

Yesterday we established that Cubby is a great fan of his chariot, and will happily wheel around in it for hours. I discovered last night that I can take advantage of this to get things done, if I'm very flexible and strong.

A. and the MiL were both gone last night and there were horrendous mounds of dishes sitting around in the kitchen, taking up all the available counter space and driving me nuts. I couldn't wait for anyone to come home to do them or take Cubby while I did them. And Cubby was somewhat disgruntled and unhappy unless he was moving in his chariot. But I couldn't do dishes and push his chariot at the same time.

I discovered that if I balanced on my left leg and jiggled the chariot back and forth with my right leg, both hands would be free to do dishes. And later, fold laundry, when I employed the same technique.

My legs are kind of sore today, though.
Posted by Kristin @ Going Country at 6:01 AM 6 comments:

Labels: all about me, baby stuff, country wisdom, Cubby, domesticity

You may have gotten the idea by now that Blackrock is a cold house. It's cold even for those accustomed to the cold, as we are. We wear heavy wool sweaters and long johns all winter long indoors. Knowing this, I had some serious concerns about having a newborn baby in the house in February.

However. There was little I could do about the timing. So we crossed our fingers that winter would end quickly this year and stocked up on fleece sleep sacks for the baby.

We were fairly lucky with the weather, which is a good thing, since infant clothing? TOTALLY USELESS in the cold. Seriously, infant clothing manufacturers. Would it kill you to make some tiny wool pants or something? Cotton is not enough to keep a child warm at Blackrock, no matter how many layers we put on said child (three on a regular basis).

All this to say that keeping Cubby warm has been an ongoing battle for the past two months, and we have not always been successful. Cubby isn't going to perish from cold or anything, but when he's cold, he's unhappy. And he lets us know it.

Yesterday dawned sunny and bright, so I took Cubby outside in his stroller with me when I hung the laundry up around 9 a.m. I realized pretty quickly that while the sun was out, it had not been out long enough to warm the air significantly. Cubby realized it too, and became very vocal in his displeasure.

I'm getting pretty adept at translating Cubby's wide repertoire of shrieking. This particular diatribe could be translated as, "What the hell is wrong with you, woman? It's 45 degrees out here! I'm an infant! I can't regulate my own body temperature! Get me inside and park me by that woodstove RIGHT NOW." 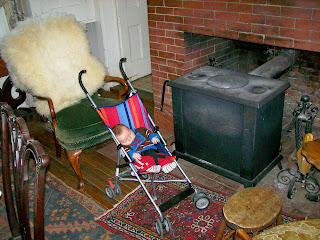 And peace reigned once more.

P.S. Alyssa, we owe you BIG TIME for lending us this stroller. Cubby LOVES his chariot. Apparently, the boy has a need for speed.
Posted by Kristin @ Going Country at 5:41 AM 8 comments:

Vegetable gardening is an excellent lesson in delayed gratification. Planting a tomato seed means you'll eat a tomato in three months, not in three hours when you next get to the grocery store. If you're thinking that's a long damn time to be waiting for a tomato . . . well, you're right. But it is also SO WORTH IT when you eat one of those grown-from-seed tomatoes.

Yesterday we had the extreme gratification of eating asparagus from our garden. The eating of the asparagus was also extremely delayed. Asparagus isn't harvested for the first two years after it's planted, to give the plant time to establish itself. So the past two years we've watched those delicious spears come up out of the ground and grow into big, feathery asparagus trees. Beautiful, yes, but I really wanted to be eating the asparagus, not admiring it.

This year, the third year, we can harvest the asparagus for about two weeks. It produces continuously, until it's allowed to grow into the feathery trees, which it always is eventually. Mature asparagus can be harvested for an eight-week period. Our immature asparagus can only handle a couple of weeks of continuously being chopped down. Because of the crazy warm weather we had over the Easter weekend, the asparagus got a jump-start this year and I spied the first tips poking through the dirt last weekend. I got all excited, because everyone says asparagus grow so quickly you can hardly keep up. Everyone says they grow to maturity in one day.

Everyone wasn't counting on our nights in the thirties.

So I waited and I waited and I checked those asparagus spears every day. They grew slowly, not appreciating the cold nights and cool days we've been having. But finally, we ate the first asparagus last night. And you know what? TOTALLY WORTH WAITING FOR.
Posted by Kristin @ Going Country at 6:35 AM 8 comments:

Millie Had a Little Lamb

Millie the Merino had her baby this morning. She's a first-time mom. Like me. Maybe we should start a moms group in the barn. Also like me, she had a boy. Unlike me, however, her boy is likely going to end up being the main course of Easter dinner.

This brings the total lamb count to six--four boys and two girls. The other small Merino is due anytime, and then there are the small Cotswolds, who will have their lambs much later.

Blackrock is awash in babies.
Posted by Kristin @ Going Country at 5:52 AM 6 comments: