Have you ever seen a house centipede? Bet you have. But just in case you haven't been introduced, prepare yourself: 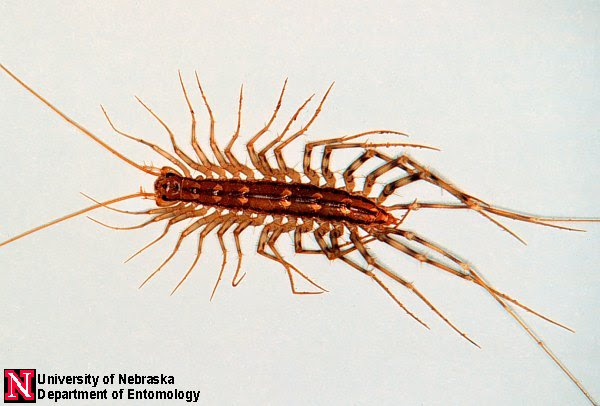 Yes, it is indeed really nasty looking. They move incredibly fast, too, in that scuttling way that, say, cockroaches do.

I do not enjoy seeing these in my bathroom, which is where they always seem to be. I don't see them a lot, but when I do, my first reaction is not, "Why hello, old friend!"

However. Awhile ago, I saw this article on the beneficial nature of centipedes in the house. In sum, they eat a lot of other nasty bugs, including ants.

I thought of this the other day when I went into the bathroom to take a shower and found a centipede in the sink. It was stuck in there, unable to get enough purchase on the rounded porcelain to scuttle out. I also noticed that the little black ants that invade the bathroom every spring and that I had been seeing for the previous few days were not in evidence.

So I didn't kill the centipede. Instead I just swept it out of the sink and let it run off into a corner. Go on, little buddy. Feast on ants. Any enemy of the ants is a friend of mine.

The next morning when I got out of the shower and grabbed my towel to dry off, I felt something crawling on my leg. I immediately did the instinctual flail about wildly to GET IT OFF GET IT OFF GET IT OFF RIGHT NOW, and what do you think went racing along the tub?

Yeah. My buddy the centipede. Probably the very same one I granted the reprieve to the day before.

I'm all about live and let live, little ant-eating creature, just don't live on my towel, okay?
Posted by Kristin @ Going Country at 6:18 AM 8 comments:

Labels: all about me, country wisdom, domesticity, wildlife

Mary very cleverly noticed in the Easter pictures that Cubby's mane also surrendered to the maniacal Barber of Blackrock, leaving me with three buzz-cut males in my house.

Yes, A. too. Why do you think Cubby wanted his hair shaved off?

I must admit that I was kind of upset with the result. I just really, really don't like buzz cuts. And I particularly don't like seeing Cubby lose all his nice, thick hair to one. But he asked, so he got it.

At first he said he liked it, but then came the first time he was tired and upset and he tried his more or less from-birth method of self-calming: twirling his hair with his fingers.

That's when he told me he didn't like having short hair. Okay! No problem, Cubby! It will grow out and we will NEVER CUT IT ALL OFF AGAIN, AMEN.

I just have to hide A.'s clippers.
Posted by Kristin @ Going Country at 5:55 PM 2 comments:

This Easter Brought to You by the Grandmothers

I do, however, make some effort. I decorate for Christmas, albeit sparingly. I managed an Easter basket last year that went over reasonably well with Cubby. But this Easter . . . well, I kind of surpassed myself in holiday suckage.

Thankfully, the children have two grandmothers who provided everything they could possibly wish for.

From my mother last week came these felt bags with various little gifts in them. 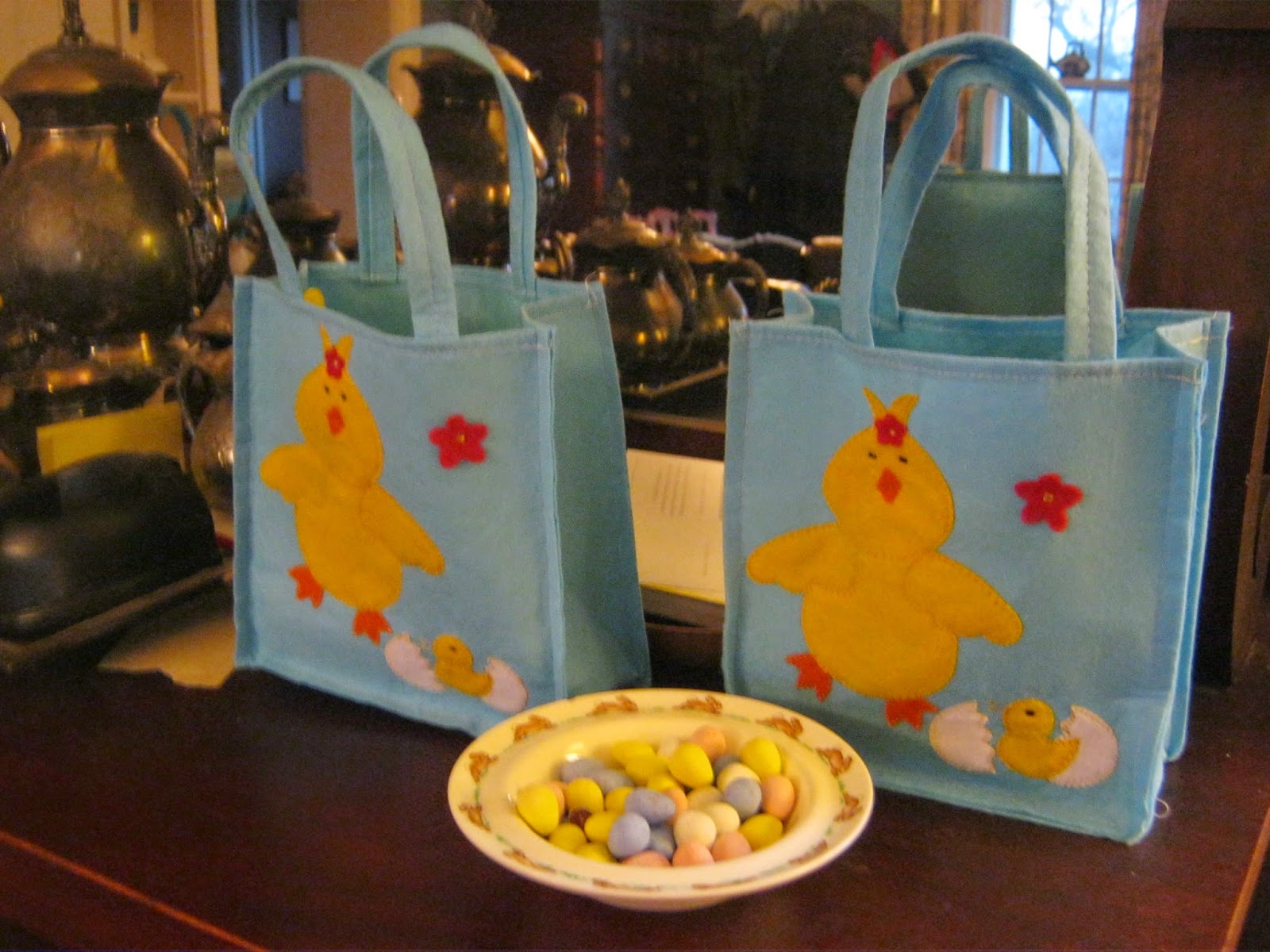 I bet there's a Pinterest tutorial on how to make something similar, but I also bet my mom bought them at the drugstore. I come by my non-craftiness genetically.

The Cadbury Mini Eggs were courtesy of the MiL, who also went around last night hiding chocolate bunnies and Cadbury Creme Eggs all around downstairs. 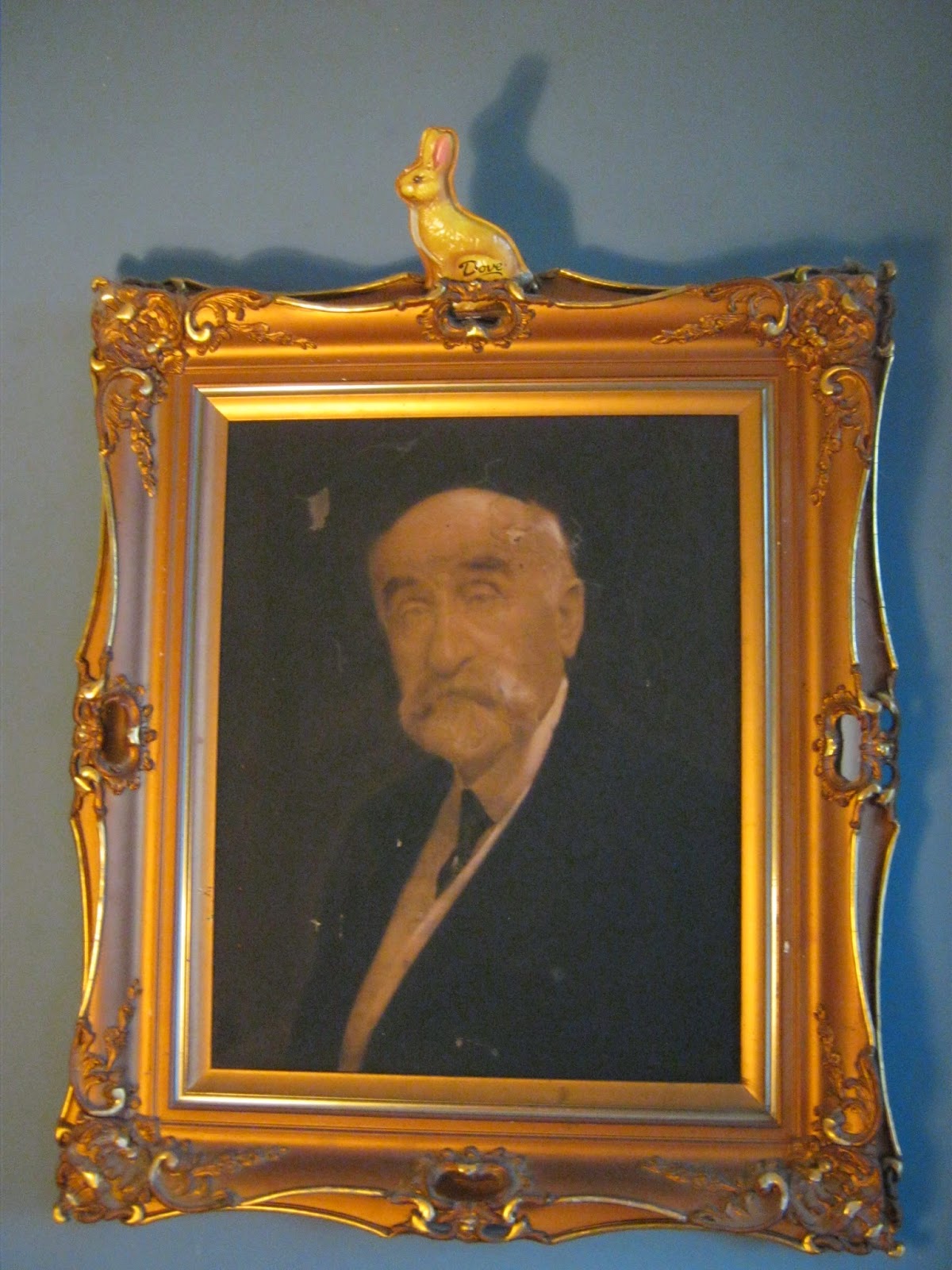 Uncle Doctor (the family member who originally bought this house in 1886) was unfortunately born too early to know the joys of the Cadbury Creme Egg. A sad thing indeed.

After donning the egg glasses and egg bubble necklaces from their bags, the children went around finding all the chocolate in the house. 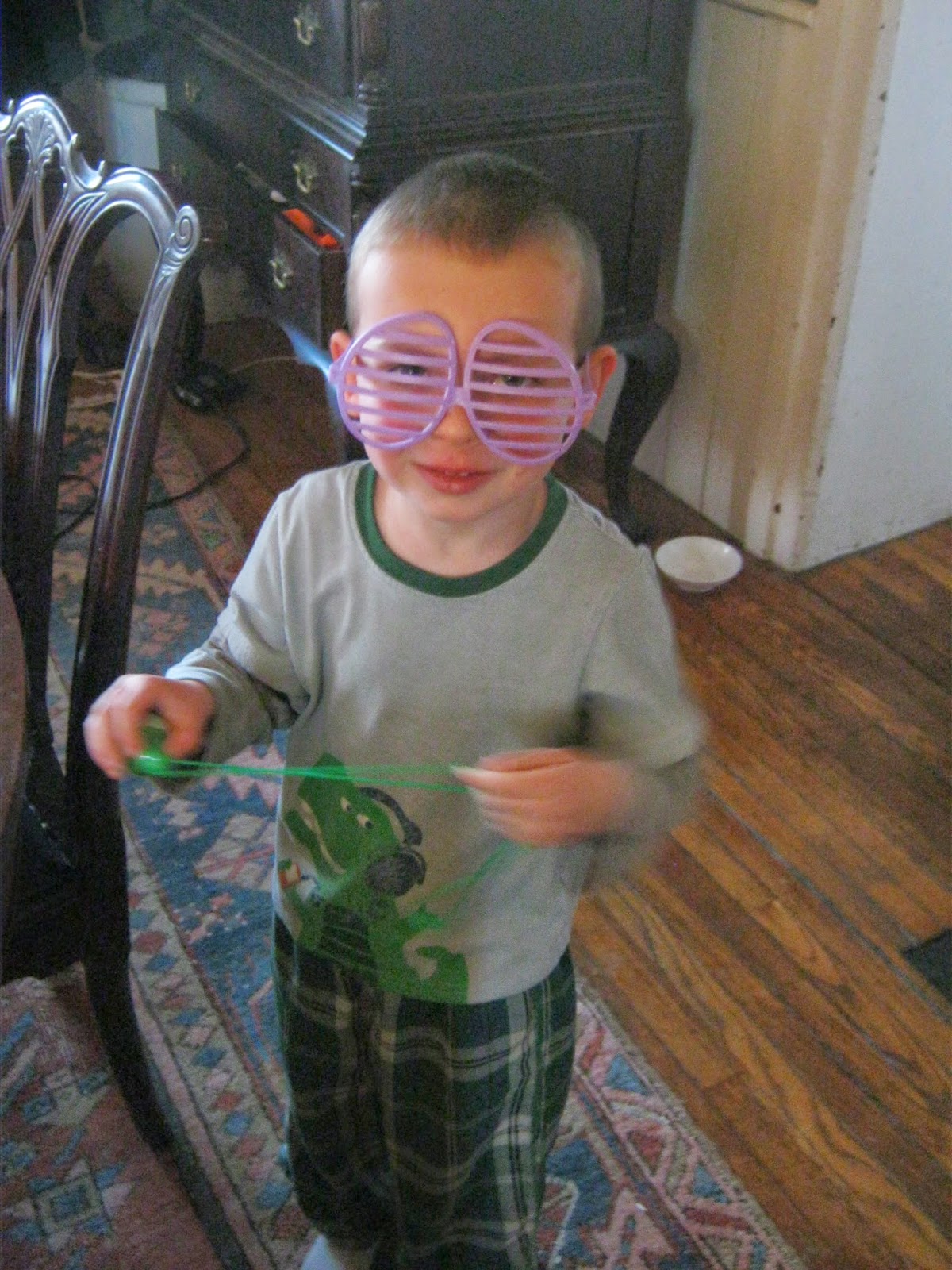 The egg glasses were later crucial to a sword game, during which I believe they were a visored helmet. 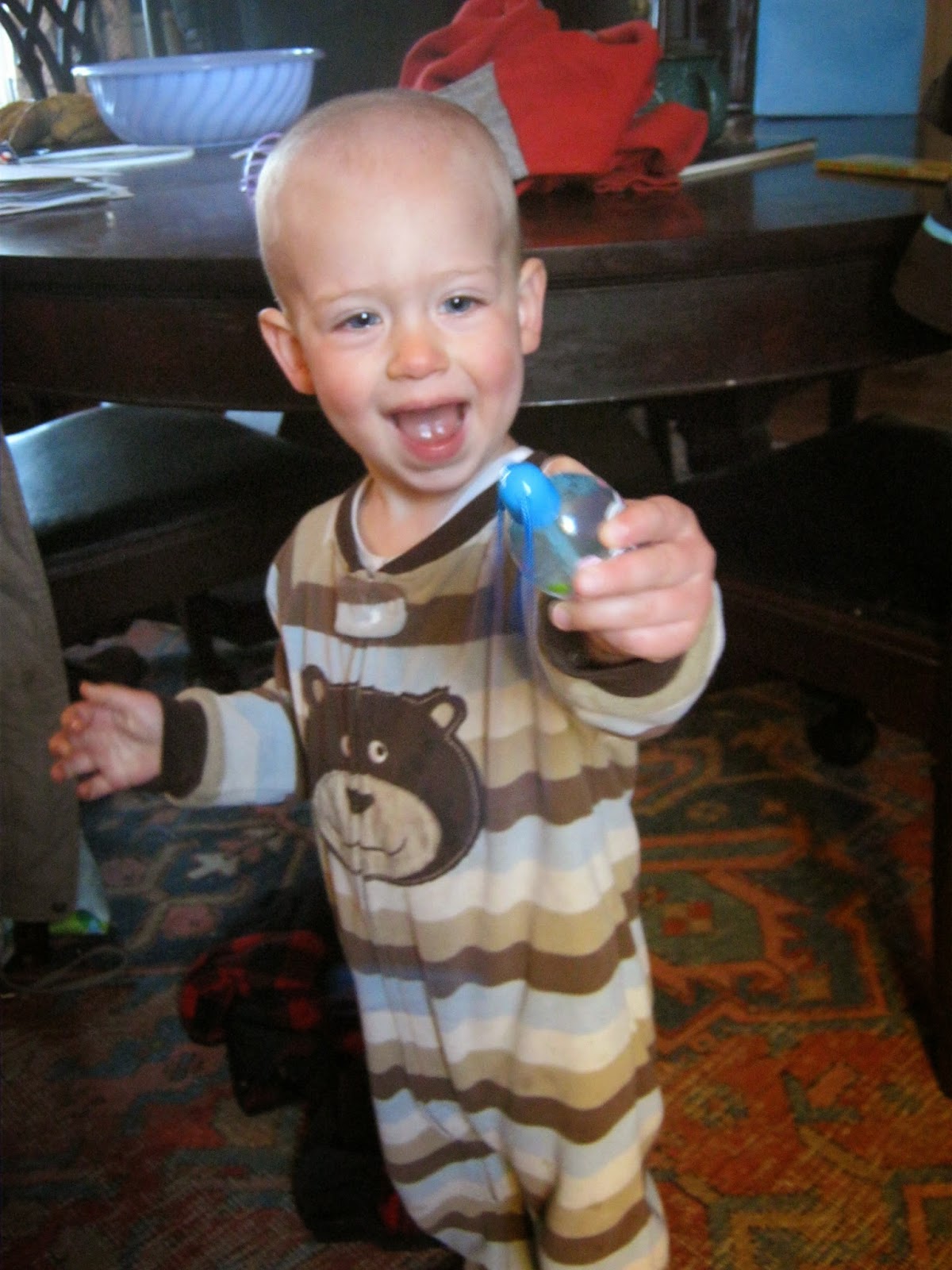 The bubbles were the real hit, though. You best believe that shortly after this photo was taken, we were all outside and I was blowing bubbles, 28 degrees be damned.

And then I put on their coats and boots over their pajamas so they could look for the dyed hard-boiled eggs outside in the frozen morning. Guess who boiled, dyed, and put the eggs outside for them? Yeah. Not I, said the Not-Fun Mommy. The MiL gets the medal for this one. 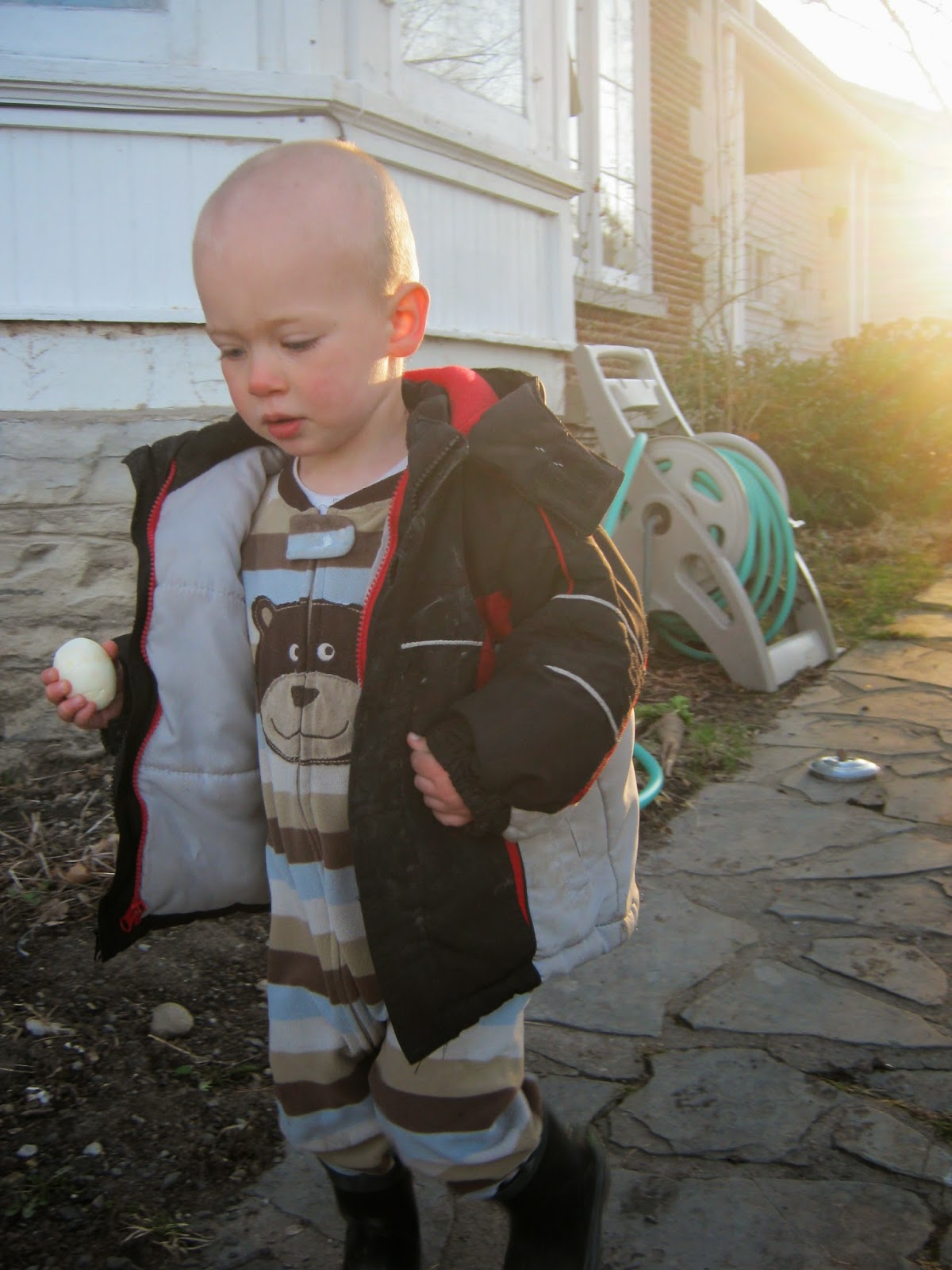 This egg had already been peeled for Charlie to eat, but instead he elected to just carry it around and drop it a few times before flinging it to the dogs.

Later in the afternoon, we went to the MiL's brother's house for the big family Easter meal. The MiL's brother is a farmer. This meant that any time not spent eating rolls and pie could be spent here: 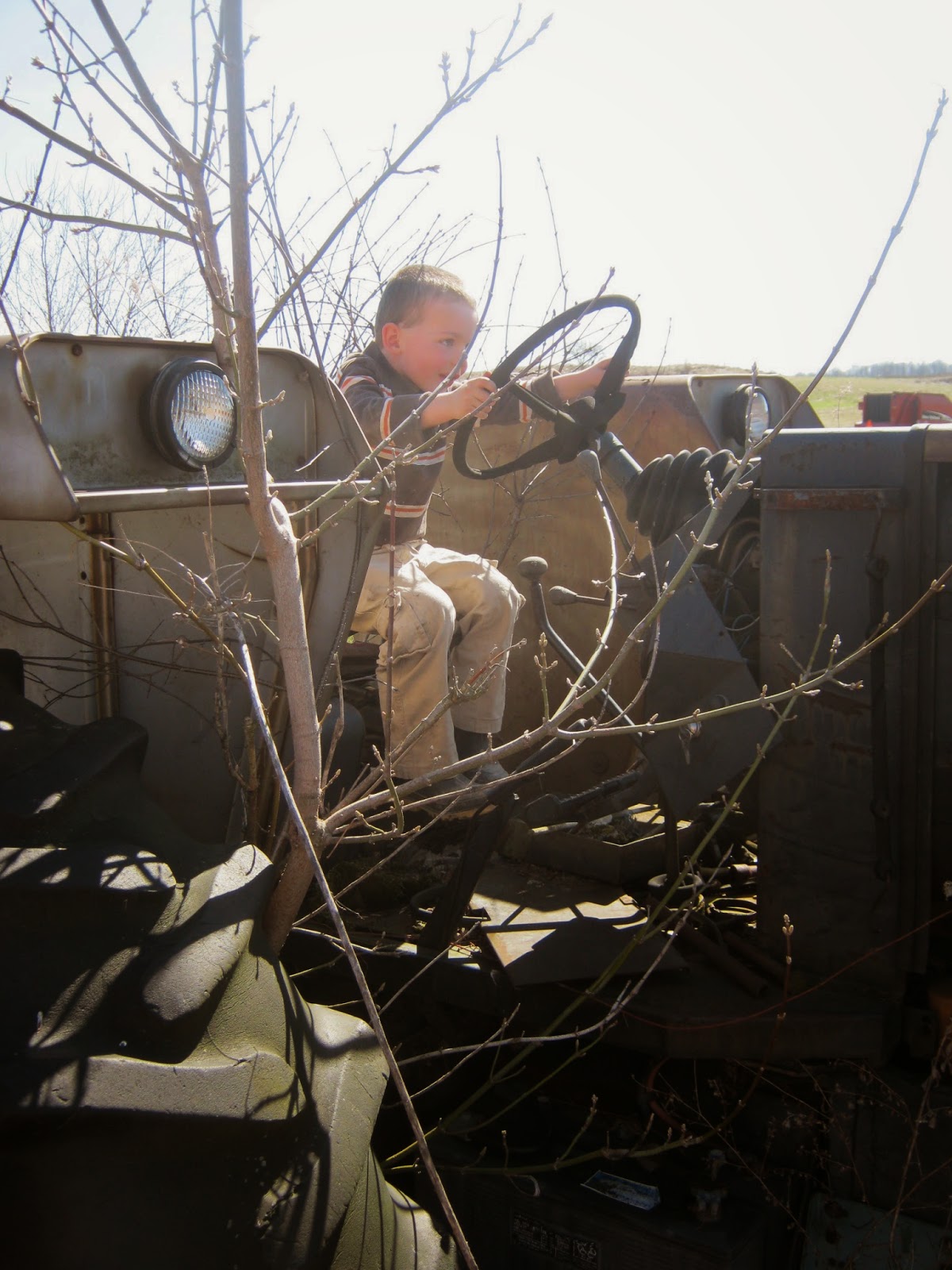 A tractor that hasn't moved in so long there are trees growing in it is the perfect tractor for a four-year-old.

Every holiday should be spent at a farm littered with derelict tractors.

The MiL also prepared and brought three separate dishes for this family dinner. Know what I made? Not one single thing. How embarrassing.

I'll do better next year.
Posted by Kristin @ Going Country at 5:57 PM 5 comments: