Just Another Day with the Crazies 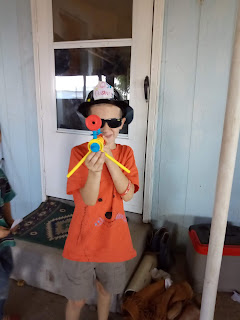 Some explanation was required.

Me: "What does your hat say? Oh, Ghost Busters.* Have you ever even seen Ghostbusters?"

Charlie: "No, but I heard the song at school before."

Me: "So what made you think of the Ghostbusters?"

Charlie: "Well, I busted Cubby over the head. This is my highest caliber weapon."

Shortly before that, I made them all come outside for a photo. My dad had requested that I have them pose by a birthday sign for his aunt, who is deaf, homebound, and turning 90 years old. So I made what is possibly the worst birthday banner ever and shoved my four kids plus the puppies in front of it.

I took 25 pictures. In some of them Cubby's giant head is blocking half the banner. In others, Cubby looks as if he's throttling one of the puppies. In another, Jack is scowling because I didn't let him hold a puppy. But this one was pretty good. 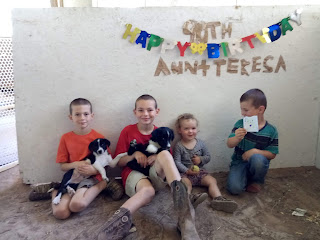 The best part of this, though, was when I was telling the kids about Aunt Teresa, I told them that my dad used to go stay at her cabin in northern Wisconsin, which had no indoor bathroom. "And that," said Charlie, "is probably why she's lived so long."

You heard it here first: The Fountain of Youth can be found in an outhouse.


Shall we get right to the puppy picture? Yes? Okay. Here's Jasper. 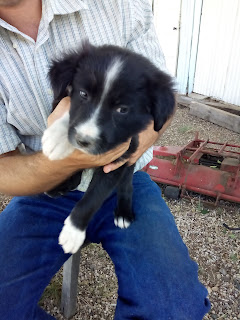 His side-eye is very impressive.

Now, on to the food.

Long version: A. was gone all day and didn't get home until after 8 p.m., so everyone got leftovers AND LIKED IT.

Just kidding. They did actually like it, because what's not to like about mashed potatoes and cheese?

Incidentally, every time we have this, Cubby remarks that this was my favorite food to eat when I was pregnant with him--true--and that's why he likes it so much. I'm not convinced of the correlation, but that boy can certainly put away mashed potatoes like a champ.

This was the day Cubby made a cardboard submarine and tried it out in a big hole they dug and filled with water. 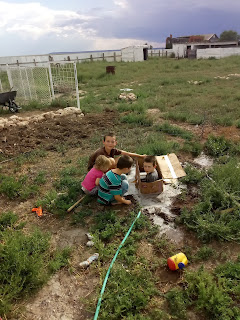 Of course, Cubby had Charlie do the actual testing, because what if something goes wrong? That's what little brothers are for, right?

Long version: I had taken out three pounds of ground beef. Then it was almost a hundred degrees outside and already 84 degrees in my kitchen and I was like, "NOPE" on adding more heat to the house.

No one complained because there was ice cream. The chocolate shell--quarter cup chocolate chips melted in the microwave with a teaspoon of coconut oil--was the "homemade" part of our traditional homemade Sunday dessert.

Short version: More rebellion in the form of various leftovers, plus watermelon

Long version: Although it wasn't quite as hot outside this day, it was 86 degrees in the kitchen and I once again refused to actually cook. We had plenty of food on hand, anyway, so it wasn't like anyone was deprived.

Cubby had a salami and cream cheese sandwich; Charlie had two corn tortillas with cheese; Poppy and Jack had tuna salad sandwiches; and they all had vegetables with ranch dip.

A. had leftover goulash, corn tortillas with cheese, and some tuna salad.

I had a lettuce-less salad (the second round of lettuce plantings isn't big enough to eat yet, alas) with cucumber, tomatoes, carrots, salami, avocado, and ranch dressing, and it was exactly what I felt like eating. Yay.

Long version: Finally a day on which it didn't feel like the sixth circle of Hell in my kitchen. So I finally cooked a normal dinner. Nothing fancy, but it was such a relief to cook without sweating.

It's the little things in life.

Long version: Still not too hot for cooking, although I wished I had been able to do the pot roast in the morning instead of the afternoon. I wasn't home in the morning to cook it, though, so afternoon it was. It was getting a wee bit warm in the kitchen by dinnertime. But still below 80 degrees, so it wasn't unbearable.

Long version: Aaaand, we're back to 82 degrees in the kitchen. That's why I bought some hot dogs when I was at a store in the morning and made the rest of dinner out of leftovers. Including leftover beef for me and a leftover hamburger for Charlie, because neither of us like hot dogs.


The puppies have arrived. 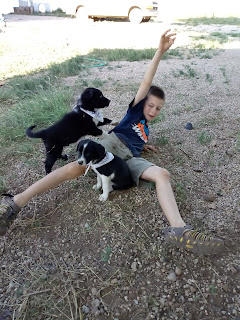 Made themselves right at home with their new pack mates, too. 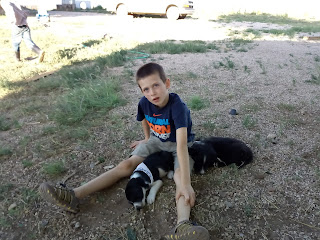 Before conking out, that is.

Their names are Jasper and Odin.

Jasper is the bigger, more energetic one. 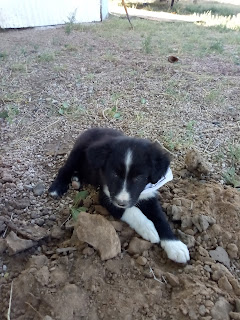 Odin was the runt of this litter, and is the puppy with only one eye. Hence the name. Well, he has the other eye, but it's completely non-functional. 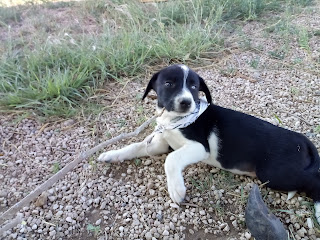 It's also white and kind of weird looking if you see it up close, but it doesn't seem to bother him in the slightest.

Both dogs are alert and playful (when they're not sleeping, that is) and seem quite well-socialized with people already. Good thing, considering the number of people in our household.

A. and I are already making plans for who needs to get up when to take them out in the middle of the night.