So how did Valentine's Day go down in our house? I instituted a strict Sugar Ban for the entire day because of the previous three days of sugar bingeing (birthday+two days of class parties).

And Cubby chased Charlie around trying to kiss him ("But Valentine's Day is all about love!") until Charlie collapsed on the floor screaming, "I hate Cubby! I hate kisses! I hate Valentine's Day! I HATE THE UNIVERSE!"

So, you know. Typical.


Happy Valentine's Day! I didn't cook elk one single time this week. And it's not because I've used it all up, either. Oh no. I just didn't cook it.

Long version: I made all of Jack's dreams come true with this meal. Homemade tortillas and taco meat made out of ground beef and NOT the dreaded elk? He loved me extra because of this.

Long version: The only sporting event we attend at the school all year is the homecoming basketball game. The kids all had hot dogs from the concession stand. A. had something called "red chile tacos," plus the hot dogs the kids didn't finish. I think Jack may have finagled a bag of chips out of his father sometime during the game when I was in the gym actually watching it with his brothers.

All in all, we spent far too much for not healthy food, but it was fun, and I have no regrets.

Long version: I wasn't planning on pizza, but then I was mixing the third addition of flour into my sourdough dough and decided to add in extra flour and make a pizza with it. It already had some whole wheat flour, so it wasn't quite as good as a white flour pizza, but still pretty good.

I only made one pizza, and I made it plain cheese. For A. and Cubby, I cooked a few pieces of bacon and crumbled them up, and then mixed some anchovy paste into that for them to top their pizza with. It seemed unappealing to me, but they enjoyed it.

Long version: Happy birthday, Cubby! Mama N. came through for Cubby in a big way by sending a snowstorm that made the roads too dangerous for the school buses. Is there any better present when you're ten years old than a snow day from school? Nope.

Part of the day was spent painting bags and boxes for the valentines they will be receiving from their classmates. 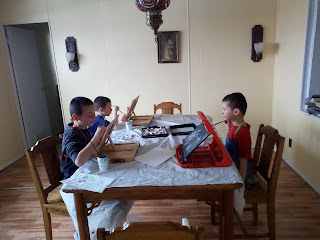 Although they were not as enthused about this as I suspect the girls in their classes are.

He also got an extra twenty-minute turn on the flight simulator. In the middle of the day. When it wasn't even dark yet*. Birthdays are indeed the days that dreams come true.

He wasn't wearing this shirt when he was using the simulator, but only because he hadn't opened it yet. 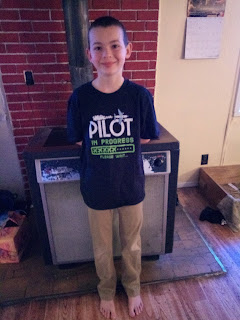 Thanks, Nana and Baca!

I got the shrimp at the store in the larger town when we were there a couple of weeks ago. I found only two bags left of the wild-caught gulf shrimp from Texas. They're a lot more expensive than the shrimp raised in tanks in Thailand or wherever, but given that we eat shrimp exactly once a year, I'm okay with the splurge. Cleaning shrimp is not high on my list of happy kitchen tasks, but again, once a year. I just sauteed them in butter with garlic, then added a bit of lemon juice.

The three family members who don't like shrimp had fried eggs.

I made the cheesecake on Sunday, and despite baking it for twenty minutes longer than the recipe specified, I think it still wasn't as done as it should have been. It was supposed to be a dense cheesecake, but was more creamy. High altitude strikes again. Still delicious, though, as anything composed solely of various dairy products and sugar is bound to be.

Oh, and I don't bother with the graham cracker crust. I made a nominal crust with almonds whizzed in the food processor with a bit of butter and sugar to coat the pan before I put in the cheesecake mixture, but honestly, it would probably be fine without anything. The point of a cheesecake isn't the crust, in my opinion.

Long version: The kids ate leftover spaghetti. Cubby finished his birthday shrimp and the other children ostensibly ate the last of the taco meat for their protein, but in reality they pretty much just ate the spaghetti.

I made the squash soup for me because I wanted something hot instead of the salad I had planned on. I made the soup by simply sauteeing some diced onion with sweet curry powder and salt, then adding chicken stock from the freezer, as well as a bag of frozen squash. A little heavy cream at the end, and that's it. I ate it with some cheese.

We also finished up the cheesecake.

Long version: This was the second package of the German-style sausage. Most of this meal was prepared ahead of time, as we were all at Charlie's and Cubby's class Valentine's Day parties, eating various forms of sugar.

I do not exempt myself from this, as one of the mothers brought in homemade doughnuts. I ate three. And then I ate nothing but salad and vegetables for dinner, because that's a lot of doughnuts.

* One of my many rules for the simulator is that they do not use it if it's light outside. I suppose this rule will have to be amended in the summer, when it's light out the entire time they're awake--and some of the time they're not--but for now, this works. 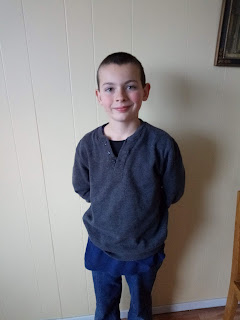 Alleluia, the Lettuce and the Lamb Live!


Yes! Even though it got below zero the other morning--it dropped another degree after I wrote this post--the layer of snow on top of the windows covering the lettuce was apparently enough insulation and the lettuce survived.

I was so happy.

Tonight we're supposed to get anywhere from 3-8 inches of snow, which is good because then tomorrow night it will be single digits again. So the baby lettuces should be okay with their snow blankie on them.

The other baby that will need protection from this storm is the lamb that was born yesterday morning.

Yup, time to update the Current Lamb Count! But first, the story.

Yesterday morning before church, A. went out to feed the animals and discovered a just-born ewe lamb in the neighbor's pasture where the sheep have been grazing (with permission, yes). She looked healthy, but she wasn't getting up to nurse and there's no shelter in that pasture. It was right around freezing, but the wind was picking up and the lamb was just too cold to get a good start.

A. didn't want to take her from her mother, because that makes it harder for the bonding between the baby and mom to get established. He didn't think he could move the mother all the way back to the shed by our house without her getting upset about being too far from her flock.

So he stuck the lamb inside his own wool coat. She quickly responded to the warmth and tried to kick him. He put her down, she stood up, and the mom came over to lick her. A good sign, but the lamb soon went down again. A lamb on the ground can't nurse. If it can't nurse soon after being born, it will die.

Right about this time, I had to leave with the children for church--Cubby is the only altar server at our church, so it's kind of important for him to be there--leaving the shepherd with his lonely vigil.

When we got back around 9 a.m., we heard the rest of the story. A. had continued to put the lamb in his coat to warm it, but she kept having trouble once she was exposed again. He eventually had the idea to make a hot water bottle out of a mason jar and wrap the lamb in his coat with that. Then he left the lamb in the pasture with her mom and came inside himself.

As he explained it to me, it's important to do what you can and then step away and stop messing with the lamb. Intervention causes stress for both the lamb and the mom.

When he went back out twenty minutes later, the lamb had gotten out of the coat on her own and was following her mom around. By the time we got back from church, she was nursing and looked just fine.

A. will move the sheep into the pasture with Samson for the duration of the coming snow event so he can put the lamb into the old pig pen there for shelter, and all will be well.

So. Current lamb count: 2--two girls, no boys, and who knows how many sheep left to deliver.