There Is Something In His Pocket . . .

Confession: I was never an actual Girl Scout. I did Daisies (like preschool Girl Scouts). And Brownies (like the Girl Scouts' little sisters). But I never did the Very Serious Bridge-Crossing Ceremony in which young girls become a member of that august body, The Girl Scouts.

My follow-through was not so good.

Luckily, my older sister was much more ambitious than I and did become a full-on member of the badass G.S. So she could teach me the Girl Scout smile song. Which I still remember. It goes like this:

There is something in my pocket
It belongs across my face
I keep it very close to me in a very special place
I bet you couldn't guess it if you guessed a long, long while
So I'll take it out and put it on . . .
It's a great big Girl Scout smile!

This is an important thing to keep in one's brain for twenty-five years (OH MY GOD, THAT'S A LONG TIME) obviously.

Cubby, Charlie, and I were hanging out in the living room today not doing much of anything, when Cubby announced that he would put the marble he had in his pocket.

So of course I started to sing the Girl Scout smile song, because that's how my brain works. I got to the part about guessing and right on cue, Cubby pulled out of his pocket . . .

Not a smile. A cicada shell*. GROSS.

He would so not make it in the Girl Scouts.

* If you don't know what a cicada shell looks like, please go to this page. That was about the first thing that came up when I searched for "cicada shell." I might have nightmares about that.
Posted by Kristin @ Going Country at 9:57 AM 6 comments:

Labels: all about me, Cubby, wildlife

In a spectacular example of either self-delusion or obviously unwarranted self-confidence, I neglected to write down what I planted and where in the garden this spring. My usual practice is to make a very rough map of the garden in a random notebook, writing in things as I plant them. It's not exactly a detailed and meticulous to-scale diagram using graph paper or anything (or, uh, at all), but it does at least allow me to see what variety of potatoes I've planted in that row by the gully fence.

But since I didn't even make my usual half-assed diagram, I was convinced--totally convinced!--that the row of potatoes next to the gully fence was an early variety planted by the MiL. I was totally wrong. This was revealed when I dug those potatoes up this morning and found unmistakably pink and purple potatoes*.

So not only did I not remember what was in that row, I didn't even remember planting that row.

They did really well there, though. 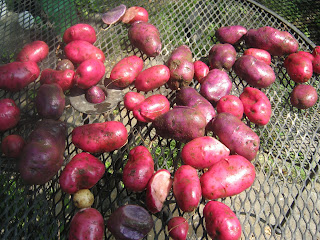 My senility at least has pretty results.

* The actual names of these varieties are Adirondack Red and Adirondack Blue, but they are NOT red and blue; they are pink and purple. False advertising by the Cornell Potato Research Station. I forgive them, though, because their potato varieties are delicious.
Posted by Kristin @ Going Country at 10:25 AM 2 comments:

Labels: all about me, fun with food, gardens, randomness

As I was sitting outside on a lawn chair on the, uh, lawn yesterday, watching Charlie play in the grass with a ball and Cubby grinding some corn*, all of us in shorts and sandals with no mud on any of our clothes, I was thinking that I'll miss this part of summer. The minimal clothing that's relatively quick to get on (important if you're dressing yourself plus two other people every day) and the dry ground that keeps those clothes mostly clean are nice parts of the season.

There's probably more that I won't miss about summer, actually, but we'll focus on the positive for now.

Your turn! What are you relishing in these last late summer days?

* This was a game in which he was drawing some dried corn tassels through a broken spot in the top of the lawn chair. I wasn't allowed to help; he said it was too dangerous for anyone but big boys like him.
Posted by Kristin @ Going Country at 3:55 AM 4 comments:

Labels: all about me, Audience Participation Days, family, weather

A Playdate at Blackrock

We had our friends Alyssa and Jodi and their two young sons over for dinner and boy play last night. Boy play, for those of you who are not familiar with the phenomena, is running around at full-speed, tackling each other in the grass, menacing each other's eyes with various implements, and a lot of other things that I, as a former little girl, totally do not get.

Whatever. They were having fun. Then, on one of their laps around the house, they discovered a baby bunny in the bushes. They made appropriate exclamations about how cute it was.

And then Leda the Fluffy Destroyer showed up. Oops.

She grabbed the baby rabbit and of course proceeded to kill it and eat it right there on the patio. With the children watching. I was inside and didn't know anything about it until Jodi and Alyssa brought their children in, visibly upset. The younger one was quite distraught and required some serious distraction in the form of the large toy box and its contents to calm him down. The older one was also upset, but shortly requested that he be allowed to go back outside. Because Cubby was still out there.

Oh yes. Not only was my son not bothered in the least by the killing and eating of the baby bunny, he actually refused to come inside, instead standing there with his hands clasped behind his back*, staring intently at Leda eating the rabbit. He informed A. he wanted to "watch her eat it all the way down."

Luckily, Jodi and Alyssa know us and our lifestyle pretty well and they grew up around here themselves, so they didn't pack their kids up and take them away from this house of horror. They might even bring them back to play some other time.

We'll just make sure the dogs are locked up.

* He does this because I have explained that if he bothers the dogs while they're eating some prey they killed, they might think he's trying to take it away from them and bite him. Not that I really think they would, but it's always good to be overly cautious about these things.
Posted by Kristin @ Going Country at 11:03 AM 3 comments: