A. and I joke a lot that we provide a lot of fodder for our children's memoirs. You know the kind of memoirs written especially by sons? All about how as children they were, I don't know, forced to watch lamb tails get whacked off or were traumatized by the sight of a gutted doe hanging in front of the house every November.

It's a joke only because Cubby is so far showing nothing but relish for this admittedly odd life we live. Charlie, however, is still a question mark. He might write his memoirs one day, blaming his parents for everything that's wrong in his life.

And if he does, his first haircut will surely be related as an example of how unfair life is for the second child.

Cubby's first haircut occurred at an actual salon. Cubby sat on Daddy's lap and got the tiny cape with the brightly-colored tree frogs all over it. The event was duly recorded for posterity via my camera.

There is no picture of Charlie's first haircut, because I did it myself while he was taking a bath.

I noticed when he was in his bath one night that when his curls were wet, the back of his hair was essentially to his shoulders. So I grabbed the scissors A. uses to trim his beard and shortened Charlie's hair up a little bit. I don't dig long hair on males of any age.

Since it was the very first haircut I've ever done on anyone, it was a little . . . rough. I neatened it up a little bit during his next bath, and it looks presentable now. Although it did mean the end of his curls, a fact which I think caused the MiL to tear up a little bit.

I kind of miss the curls, too, but here's how I see it: he's walking in a more or less competent fashion now. He recently completely weaned. He's ready for the big time. The big boy time, that is. So it was time for big-boy hair.

I may have failed at photos of the cutting, but I did get some afters: 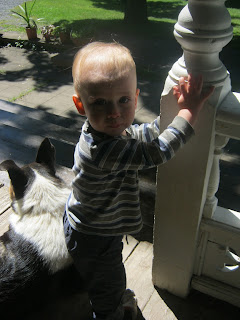 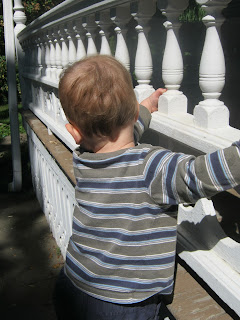 The Making of Ice Cream

Perhaps surprisingly for those who know us and the extent to which food and its procurement dominate our life, we had never made our own ice cream. This, despite the fact that every single member of our family (and yes, I include Charlie in this--start ´em young, I say) loves ice cream with a deep devotion.

However. I have had no complaints with my Perry´s White Lightning (except when I can´t find it, and then I complain loudly and publicly). And I have not been very motivated to make ice cream at home.

A. was, though. Specifically, he was motivated about a month ago when I went into the kitchen right after dinner to find him improvising a double boiler on the stove so he could make a vanilla custard base. He had apparently decided during dinner that he wanted to make the ice cream. He used the hand-crank ice cream maker that belonged to his grandparents. It had been languishing in our upstairs back hall for about, oh, five years now. God knows how old the thing is, but it was there, and A. wanted ice cream. So he made some. 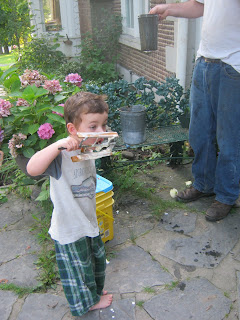 And you best believe Cubby was on hand to lick off that extra-large paddle. And drip ice cream all over his pajamas.

It worked, and the ice cream showed great promise. There was just one teeny-tiny problem: a literal teeny-tiny hole in the bottom of the ice cream canister that allowed the salty ice water outside of it to leak in.

Not that salty ice cream is a deal breaker, but it´s not ideal. So the MiL, inspired by the fact that A. was willing to do all the work, decided to buy a brand-new ice cream maker. It arrived a few days later and A. put it to work making peach ice cream. 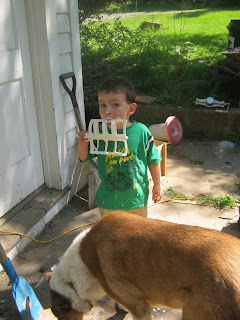 Cubby, of course, was again on hand for clean-up duty. With Mia's able assistance.

A. and the MiL were in ecstasies over the homemade ice cream. Cubby and Charlie made no complaints. I thought it was . . . okay.

I´m going to be stoned by every foodie in the world for saying that, I know, but the truth is that homemade ice cream is best with things like fruit. And I´m not a huge fan of fruit ice creams. Know what I AM a fan of, though? Ice cream with maple syrup. And know what´s about the best thing ever? Homemade maple ice cream.

We made a batch for a big family party we had here on Friday. With so many people, each person only got about half a cup. Which is of course plenty with ice cream as rich as this, but not really because I could eat a gallon of that stuff.

Over time, of course. A gallon all in one go would make me really sick. But it would be a satisfied kind of sick.

So before it gets too cold to eat ice cream here, we´re going to have to make more maple ice cream. And I'm going to eat A LOT of it. So there.

Labels: all about me, Cubby, family, fun with food, MiL, the A team

When Charlie woke me up in the dark of the morning this morning, I automatically looked at the clock. It was blinking, indicating a power outage at some point in the night. But this particular clock doesn´t blink 12:00 over and over, like some clocks do. It will still change every minute. When I woke up, it was blinking 3:48 a.m.

I watched the time progress on the blinking clock as Charlie worked on putting himself back to sleep. I watched the minutes blink by as I listened to the thunderstorm outside that illuminated our bedroom with flashes of lightning.

Finally, when the clock was blinking 4:48 and I was still not asleep, I decided to give up and get up. I got dressed in the dark (a skill I have perfected since having children--thanks, kids!) and crept downstairs. When I turned on the light in the bathroom, I saw that my watch said 4:20 a.m.

So here I am, up dark and early. I will really regret this around three this afternoon, but at least I get to have my coffee without interruption. And at 4:30 in the morning, I´m going to need a lot of it.

Happy Labor Day, my fellow Americans! Here´s hoping you slept later than I did.
Posted by Kristin @ Going Country at 2:42 AM 3 comments: