This Little Piggie Ate All the Eggs

I made eggs for dinner last night. I cooked three for A., two for me, and two for Cubby. * I almost made just one for Cubby, but then I thought that I really didn't want him to end up eating most of my dinner, which he does with some regularity, so I'd better make him the extra egg.

He ate both of his eggs. Then he ate one of my eggs. And then he ate some yogurt. So apparently, I should be making two eggs for me, and three eggs for both A. and Cubby.

The rest of those hens had better start laying soon. I've got a growing boy, here. Who seems able to eat as much as his full-grown, quite large father.

I'm in so much trouble when this kid is a teenager.

* The MiL was out--I didn't just refuse to make her dinner or anything.
Posted by Kristin @ Going Country at 6:56 AM 5 comments:

One of the unfortunate effects of the Great July Drought has been to make the many, many cabbages I planted this spring both somewhat small and prone to bolting. Cabbages will usually keep for several months after being harvested in the fall, but this year I've had two bolt already.

They're unusable when they bolt, since they basically become one big, tough core. So in order to save the rest, I had to harvest them right away. And then I had six cabbages and definitely not enough refrigerator space for all that cabbage. Plus, we love coleslaw, but there's only so much of it we can eat.

I actually canned the first batch of sauerkraut last night, which was about a gallon when it went into the jar to, uh, sauer, and then ended up being about three quarts when it was canned (it wilts quite a bit as it ferments). The first step in making sauerkraut is actually just slicing the cabbage up and then salting it to start releasing its liquid. Only after that step is it put in its sauering receptacle.

I usually use the crock from my Crock-Pot and my biggest bowl to do the salting step. That will hold about the amount of sauerkraut I made in the last batch. It will not, however, hold the amount of sliced cabbage I ended up with after sending six cabbages through the food processor's slicing blade. But what to use? I don't really have anything much bigger than that crock that would be easy to mix the cabbage and salt in.

Okay, so I do have the twenty-gallon crock, but that's a little too big and unwieldy for this.

What I did have, however, is a slightly cracked refrigerator crisper drawer that I fortuitously just washed after replacing it with a new one yesterday. It's big, it has a wide top, I can mix cabbage and salt in it. So what if that is not a use for which it was intended? I use my car as a food dehydrator, for God's sake. I use what I have. 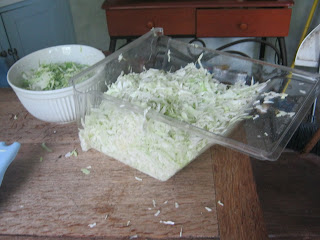 Probably not a use Frigidaire ever envisioned.

I suspect that's not actually food-safe plastic, but since the cabbage is only in there for a couple of hours, I'm not too worried about it.

And on a last, totally inconsequential and random note, shredding up cabbage makes one hell of a mess in every area of the kitchen.

Happy Friday, poppets! Have a fantastic long weekend. I know I will. Know why? There will be salsa canned. Oh yes. Fun and excitement indeed.
Posted by Kristin @ Going Country at 7:53 AM 3 comments:

I Want Someone To Blame

I canned the last of the peaches last night, and the worst happened. "The worst" being, of course, that a jar broke in the water bath. Nasty waterlogged peaches floating in the water, broken glass to deal with, and all that wasted work (and peaches).

This is actually the second jar of peaches I've had break on me in the canner. Last year I had problems with the lids not sealing. This year I haven't had a single lid failure, but now the jars have it in for me. The glass in the jars can get fatigued and prone to breaking over the years, and Lord knows we have some seriously old jars hanging around. Which means I can't really blame the Ball Company for this one.

Still mad, though. And now I only have 24 quarts of peaches instead of an obviously much better 26.

This had better not happen with the tomatoes, or there will be blood. Or at least some cussing.
Posted by Kristin @ Going Country at 4:30 AM 6 comments:

I am convinced that you could stuff pretty much anything into an enchilada and it would taste like . . . an enchilada. My mother always makes enchiladas with ground beef, so that's how I always made enchiladas. And they are, without doubt, delicious that way.

But chicken enchiladas? Also delicious. Plain cheese? Yup. And last night, I made a filling with a volunteer butternut squash that kind of fell off the vine when I was checking on it, so I brought it inside, chopped it up and mixed it with black beans and onions and garlic and spices and stuffed it into tortillas with cheese, after which I dumped the enchilada sauce over the top and baked it all for awhile.

I couldn't even really taste the squash. I guess it's just the sauce and cheese that mask any other flavor there might be. And the sour cream on top, of course. Whatever it is that makes it work, I am adding this one to the zucchini quesadillas as evidence that Mexican spices and cheese can make anything taste good.

Except maybe liver. Mexican liver? Don't even.
Posted by Kristin @ Going Country at 4:30 AM 3 comments: 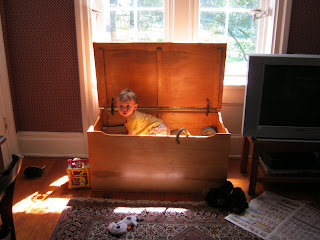 Climbing into the kick-ass toy box and then throwing all the toys out. 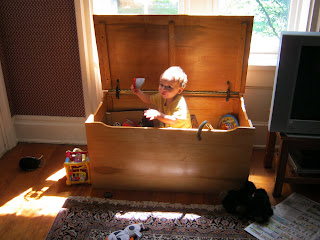 Not PLAYING with them, you understand, just chucking them all out. 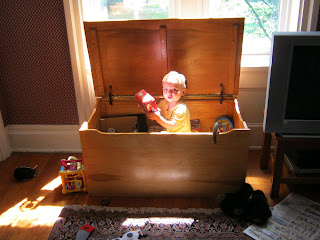 And then I obligingly put them all back in while he naps so that the rest of the family isn't climbing over mountains of toys to get through the library. So then he can do it AGAIN! WHEE!

I need a maid. Or a nanny. Or possibly just fewer toys in the toy box.

On Friday I harvested a few of our purple cabbages, which have actually done pretty well despite the garden-killing weather in July. The best use for purple cabbages, of course, is German red cabbage with apples. Slightly sweet and vinegary and YUM. Especially with kielbasa. Best winter dinner ever.

So I cut up all those cabbages and put them in my big pot with the onions and apples and vinegar and sugar and spices and . . . then I attempted to stir it. Yeah. Three cut-up cabbages fills my pot pretty much to the brim. It's kind of hard to stir it when it slops over the sides every time I put a spoon in there. But I managed, and eventually it cooked down to a manageable level.*

While I was stirring this enormous pot of purple cabbage, however, I couldn't help but think of the scene in A Christmas Story when Ralphie takes the lid off a gigantic pot on the stove and disgustedly stirs around a vat of the very same red cabbage. And behold, I found a clip on YouTube. Except not of him actually stirring it, but of the exchange between him and his mother after the stirring.
Enjoy the clip, poppets, and have a happy Monday.

* And then I froze it, because I think it tastes over-cooked and burned when it's canned. We have five quarts of German cabbage in the freezer now. YAY!

My tardiness this morning has nothing to do with Irene, who seems to have decided to only send a little rain and wind our way. Nothing exceptional. No, today's late post is brought to you by Cubby, The Boy Who Wouldn't Nap. He thought there was no point in taking a morning nap when there was food to be eaten and books to be read and toys to fling about the living room.

Yesterday he didn't take an afternoon nap, and that was almost certainly because of this: 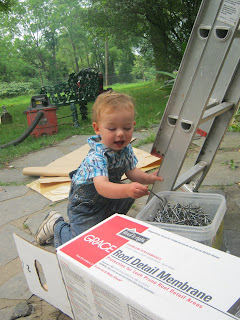 Who can sleep when there's a huge bucket of nails to play with? 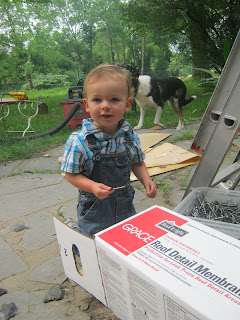 And by "playing," we mean "dumping on the ground and then carefully putting back into the bucket." Over and over and over. 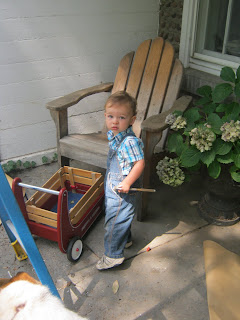 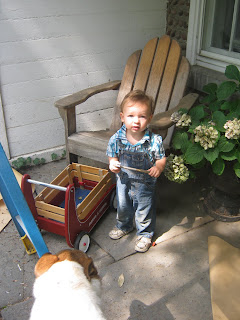 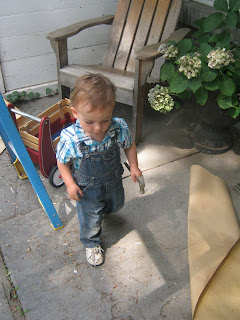 But the hammer was way more exciting.

Thanks to A.'s heroic efforts, the patio roof was entirely finished yesterday. Cubby's contribution was negligible, though he did keep careful track of the hammer.
Posted by Kristin @ Going Country at 9:38 AM 8 comments: