Long version: I did three loads of laundry this day, much of it because of the illness that caused Poppy to cough so hard in the night that she threw up all over me and my bed. Three times.

I was tired. I did not want to cook. I did anyway, because that's how this parenthood gig works.

I had some chicken hanging out in the fridge that had to be cooked, plus half a can of tomatoes. So in the morning while 2/4 kids were sleeping the sleep of the snotty and sick, I made a sauce with the canned tomatoes, some fresh grape tomatoes that were getting wrinkly, a shallot, garlic, oregano, basil, a bay leaf, and some red wine. Plus some fancy pink Himalayan sea salt given to me by the lady we get milk from as a thank you for sharing my sourdough starter with her.

I also separated the chicken leg quarters into drumsticks and thighs and yanked off the skin (GROSS). I salted the chicken and stashed it back in the fridge until later.

During the baby's second nap in the afternoon, I browned the chicken pieces and put them in the pan with the tomato sauce and baked the whole thing covered for an hour. This produced a lot of liquid, so I uncovered it for the last half hour. Still a lot of liquid in there, which I just drained off and saved for making soup.

Leftover rice with butter, frozen peas in the microwave, and everyone was fed.

I got all the laundry done and put away, too, which was significantly more impressive.

Long version: Welcome home, A.! Sorry I didn't make anything more exciting for your welcome home meal, but I was still tired. Fried meat it is. (Hamburgers are actually one of A.'s favorites, so it wasn't quite as pathetic as it sounds.)

Long version: The exhaust fan in this kitchen really sucks. I set off the smoke alarm in the hallway at least once a week while I'm cooking. Frying steaks is almost guaranteed to do it: 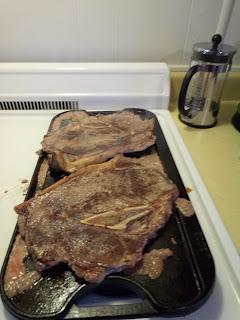 Especially if they're so big they hang over the edge of the pan a little bit and drip fat into the flames. Yeah.

Good thing the junior firefighters were on the job: 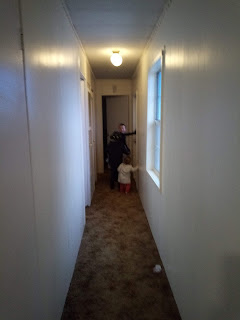 First they open the back door (being careful that the most junior firefighter doesn't try to make a break for it). 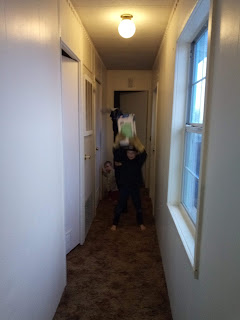 Then they use some empty cereal boxes to fan the smoke away from the smoke alarm. In the absence of trucks and hoses, this works pretty well.

Does it seem that we've been having a lot of frozen vegetables lately? Yes. And why is that? Because I didn't have any fresh vegetables left. None. Not even carrots or cabbage. I was also almost out of milk. Such is life a long way from a grocery store in winter.

Long version: But wait, wasn't I out of fresh vegetables? Well, yes. Except for Rafael's calabaza and the last of the "ornamental" squashes A. bought at Walmart before Halloween. None of them were labeled with the varieties, but this was the blue-gray one that looked like a Jarrahdale pumpkin. Thankfully, unlike the previous squash I cooked, this one was delicious. Deep orange, not at all watery, and very flavorful. Also, it resulted in about 12 cups of pureed squash, which makes my squash-loathing children fearful. 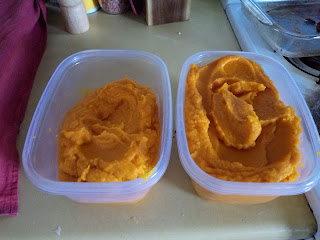 That's a lot of squash.

When the squash was out of the oven, I put in the roast--an arm roast--with the juice from a can of tomatoes, garlic, oregano, basil, and a bay leaf.

The tomatoes from the can I roughly chopped and spread in a Pyrex pan with olive oil, whole unpeeled cloves of garlic, and more basil and oregano. That all cooked for an hour or so, then I pureed it in the food processor after I pureed the squash. I didn't really scrape out all the squash, either, so it was a squash/tomato sauce. Sneaky.

And, because I was baking bread again (AGAIN), I made a loaf of garlic bread again. This is always a popular menu item. Certainly more popular than the small spoonful of squash and two pieces of zucchini I put on the boys' plates. Probably their two least-favorite vegetables, so I figured rather than make them choose between the two evils, I would just give them a little of each.

Long version: Poppy came down with a fever this day, which meant I had a miserable baby plastered to my front all afternoon. So I handed over the bacon-frying and egg-scrambling duties to A. I managed to get in the kitchen and pass off the clinging monkey-baby to A. so I could heat up the side dishes and plate everyone's food. I also managed to bolt down my own food before taking monkey-baby back and putting us both to bed in my bed.

I felt sorry for Poppy of course, but I must admit that I kind of enjoyed going to bed at 5:45 p.m.* Not that it meant I actually got any sleep, as she was awake many times during the night and when she did sleep, it was either flat on my front or on my shoulder, but at least I got to bed early.

You will note, I am sure, that we had a fresh vegetable. I went to the grocery store with Jack and Poppy in the morning (before Poppy went down) because Jack had an appointment for his four-year vaccinations at the clinic fifty miles away. But then they had no record of his appointment and I had to re-schedule it, which means I have to drive the 100 miles again in two weeks. But at least we had the tomatoes, right?

Long version: I don't bother putting the chicken in a pan with butter in it anymore. The pieces I use seem to have enough fat to make that unnecessary. Instead I put the coated chicken on a cooling rack that fits into a half-sheet pan. It gets crispier this way, but it does result in some terrible dishes. Cleaning that cooling rack is a real bitch.

I shouldn't even bother listing the squash. You can just assume that I'm eating it at every meal. That's what happens when you have 12 cups of squash on hand.

Long version: Don't forget the squash. Forever and ever, amen.

* I did extract myself from monkey-baby's clutches right before 8 p.m. to remind the boys that they had to go to bed; finish loading and start the dishwasher; and sweep up the clumps of mud that were all over the kitchen thanks to the fact that Jack was inexplicably clomping around the house in his filthy boots. That's the sort of thing that happens when I abandon ship for two hours.

It's a Dirty Job, and We Have To Do It


The very day A. was due home from New York, I had a terrible time keeping the fire going. After all my boasting about my careful fire care during his absence, I figured I had jinxed myself. But then I realized that the handle attached to the damper inside the stove pipe seemed to have come loose and was no longer turning the damper to open it. Which meant that the fire wasn't getting enough draft to burn well.

A. confirmed this when he got home and said there was nothing to be done but let the fire go out and take the pipe apart in the morning to get at the damper.

When we got home from church, he said, "Okay, I'll fix the stove now. It shouldn't take too long."

Those, my friends, are the very definition of famous last words.

He took apart the stove pipe. This is when he saw that there was a rather dangerous build-up of creosote inside the stove pipe. So we had to get that cleaned out lest it cause a chimney fire and burn the house down.

However, we don't have the proper tools to clean the pipe. A bunch of old rags attached to a long, stiff wire did the trick, along with A. basically sticking his entire arm up the stove pipe. Luckily, our house is only one story, so the stove pipe isn't that long and this cleaned out the majority of it. 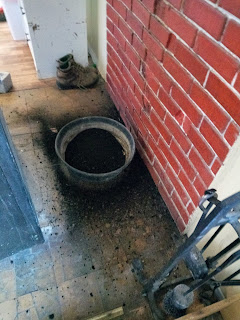 This is not what you want to see in your kitchen.

In addition to all the creosote that came out of the pipe and (more or less) into that pan there, the actual pieces of stove pipe that A. took apart fell to the floor and scattered creosote across a large part of the kitchen floor under the table.

I knew we had to do this, but to say I was displeased about the mess was a vast understatement.

A. bore the brunt of the filth in the cleaning of the stove pipe: 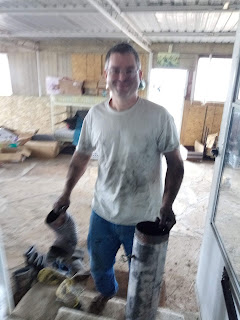 Look at that chipper chimney sweep.

But I was tasked with the clean-up of the actual house when the stove had been re-assembled.

Thanks to Bugs Bunny (for the boys) and a nap (for Poppy), the children at least were out of the way during the part where the stove was in pieces and piles of creosote were all over the kitchen. But just as A. finished up and I was starting to sweep and mop the horrid mess off the floor, the cartoon ended and Poppy woke up.

The boys were whining in the doorway that they wanted lunch, Poppy was crying in her crib, and I was faced with the reality that a mop does very little to actually clean a large quantity of creosote off the floor.

I sort of got the floor cleaned--leaving Poppy to cry in her crib for a few minutes and ignoring the whining for food--but for the rest of the day everyone was going around with gray socks.

After the kids were all in bed, I got down on my hands and knees with many wet rags and got the floor really clean. Hands and knees was the only way to do it. The mop was just pushing dirty water around, because it got dirty immediately, as did the water in the bucket the first time I dunked the mop in there.

This morning I spent some time with another rag cleaning window sills, cabinets, the top of the microwave . . . basically every flat surface in the kitchen that had collected a layer of fine creosote.

But now the kitchen is finally clean again, and the woodstove won't burn the house down. Hooray.