My loyal coffee cup has finally given up the ghost. The coffee cup that I bought in the Small City near Blackrock when I was pregnant with Poppy. It was extra-large--crucial given my chronic lack of sleep in the past two years--extra-wide, and, well, mine.

I dropped it this morning when I was taking it out of the dishwasher. It hit the door of the dishwasher, but didn't seem to sustain any damage. I had my first cup of blessed coffee, took a firm grip on my coffee cup to get up for the second one, and . . . 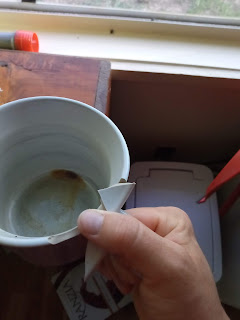 At least it didn't break while I was drinking my coffee, thereby depositing sharp pieces of ceramic in my coffee or, like, slicing my lips.

I had to have my second cup in Charlie's dinosaur mug. The dinosaur skeletons become visible when hot liquid is added to the mug. 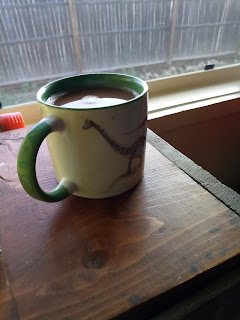 Whimsical, but not big enough.

Luckily, we're leaving for Blackrock next week (I can't think about this yet, or I will succumb to the overwhelm), so I can add another coffee mug to the long list of things to look for at a thrift shop while I'm there.

In the meantime, I'll be having my coffee in a sub-par cup and mourning the loss of my faithful old companion.

Friday Food: Kids All Over the Kitchen

Long version: To say this is an unusual meal for us is a great understatement, but it seemed a fitting end for a day in which we took the kids to the beach and got them ice cream bars. Summery, in other words.

Charlie and I don't like hot dogs, so we had the leftover hamburgers. I had promised Cubby I would get him some cheese puffs, because last time we got chips for a picnic, I got the crunchy Cheetos at Charlie's request, overriding Cubby's plea for cheese puffs.

Again, I'm with Charlie on this one. It's really weird how those puffs melt away to nothing in your mouth. Crunchy Cheetos all the way.

Long version: Well, it happened. The other boys have become jealous of all of Cubby's time in the kitchen and started demanding their own culinary adventures. This is the problem with having so many children, you see. What one does, the others must do or it's just not FAAAAIR.

I had told Charlie he could help me the next time I made garlic scape pesto. So he did. The lamb's quarters are unfortunately done for the season, so the only thing I had to add to the scapes  (besides the standard nuts and olive oil, I mean) was some beet greens. This made for a very, um, lively pesto. 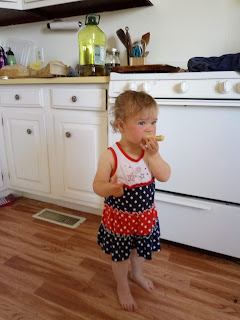 Our patriotic quality control deemed it too fiery and demanded a piece of bread with plain butter instead.

As you can see in the background of Charlie's photo, I was making bread that day, so instead of putting the pesto on pasta, we made pesto bread.

I made a round loaf of bread, cut it in half along the equator (that makes sense, right?) and then Charlie spread on some butter and a layer of pesto. 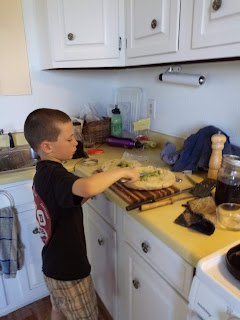 I topped that with some Parmesan cheese and put it under the broiler until it was crispy.

I added a dollop of pesto to the cooking mushrooms, and A. topped his steak with pesto as well, so it was a very garlicky meal.

The raw cabbage was Charlie's choice for a vegetable. No pesto on that.

Long version: Remember Ray, Rafael's hunting guide son who brought us meat a few times last fall? Well, he stopped by on Saturday and unloaded half his freezer contents into our freezer. He and his wife are doing a bunch of work on their house, so I must assume kitchen renovations are underway and they needed to get their freezer out of the way.

In any case, we now have about fifty pounds of beef (they have a family ranch and get their beef processed at the same place we got ours from) in our freezer courtesy of Ray. I gave them a loaf of bread in return, which seems a poor trade for them, but at least it was fresh bread.

Anyway. I used some of Ray's ground beef--80/20 from the store, which I do not like, but gift horses and all that--to make taco meat (into which I put another spoonful of that handy pesto) and this time, Jack was my assistant. 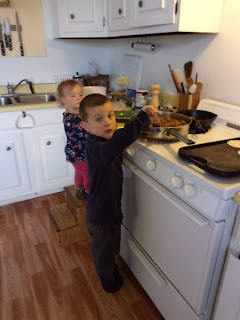 Although a four-year-old and an 18-month-old in the kitchen means more anxiety than it does assistance.

He also helped me press the tortillas, but I was too busy helping him with that and keeping the rest of the tortillas from burning to get a picture of it.

The tortillas continue to be a hit with all members of the family, and despite increasing the number I make every time, I haven't yet had any leftovers.

The cookies were from Cubby's cookbook and have so far been the best recipe from that book. It's a totally weird method in which the butter is melted before being mixed with the other wet stuff and then folded into the dry ingredients, kind of like biscuit dough. I was very skeptical of this, but it turned out some chewy, delicious cookies, and I love the fact that I didn't have to remember to soften butter.

We actually made the cookies on Wednesday when it was kind of cold and I wanted to run the oven to help heat the house. We froze some to have for our Sunday dessert. It took a great effort of will for me to not eat them all before Sunday.

I wish I was kidding about that.

Long version: A. was gone all day getting the van fixed (two hours away, which is why we didn't try to drop it off and leave it), and I was not motivated to do anything very ambitious for dinner. Good thing we had so much taco meat left.

Long version: Although A. is not a fan of grilling, he consented to grill these steaks. It was warm, finally not too windy, and, as he noted, if he used the outside grill, he wouldn't have to scrub the griddle pan. Sold.

Long version: I disappointed every single one of my children by making meatloaf instead of meatballs. I just really, really didn't want to roll individual meatballs. Also, I'm almost out of barbecue sauce and I hadn't made any marinara sauce.

Everyone still ate two servings, despite the crushing meatball disappointment.

Also, I used the last tablespoon of pesto in the meatloaf, which I found very pleasing.

Long version: The first thing I grabbed from the freezer in the morning were a couple of packages of beef ribs. These I just cooked in a covered pan most of the day with salt, pepper, and tomato juice.

The scapes were a couple dozen little ones Cubby discovered on some of A.'s smaller garlic plants. Not enough for a full side dish, but certainly enough to flavor the meat. Cubby chopped those into short pieces for me. I sauteed them and when they were soft, I added the beef pulled into small pieces and fried the whole lot in some beef tallow I had poured off from the ground beef I used for the taco meat on Sunday. Nothing else but salt and pepper. Delicious and thrifty. Hooray.


This is what it looks like when you forget to put the sourdough starter in your sourdough bread: 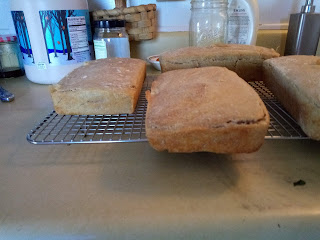 The worst part is that I realized something was off when I got to the stage where I was supposed to take starter out of the rising dough and put it back into the refrigerator.  There was quite a lot of starter in the jar I was meant to be re-filling and I thought, "Huh. I must not have taken very much out to start with," and continued stupidly on. Despite the fact that nothing was rising. I went all the way to actually baking the bread. I was tipping it out of the pans before I realized that I probably hadn't ever actually put the starter in.

Not my finest moment.

So now I have four heavy, doughy bricks of "bread" to use.

You didn't think I would THROW IT AWAY, did you? Perish the thought.

I read that they could be used for croutons. Or bread crumbs. Or cracker-ish things, if brushed thinly and re-baked with some oil.

And of course, I will start a new batch of bread tomorrow. With starter in it.

Labels: all about me, confessions, fun with food, stupidity


If you've been reading here for a long (loooong) time, you may remember when Cubby took it upon himself to plant his own garden. He found and planted peas. He watered them. He spread compost on them. He weeded them. He ate them.

He was five years old. It was pretty impressive.

This past fall, when A. was in the throes of his massive garlic planting, Cubby decided he wanted to plant some garlic, too. So he took a head of garlic and planted it in a completely random spot near the propane tank. The area had not been prepped for planting. We had no idea how well garlic would grow here. But he planted them. He watered them. He weeded them. And this week, he dug up his garlic. 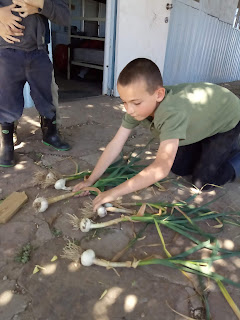 He carefully spread them out so I could get a good picture of their hugeness, which unfortunately doesn't really show too well when they're spread out like that.

They really are some impressive heads of garlic. Bigger than most I've ever grown, for sure.

He's going to enter one of the biggest heads into the county fair in the vegetable division. And then he's going to plant all those cloves again, so that next year, he can have forty heads of garlic instead of seven.

Maybe next year I should just put him in charge of the whole garden.

Oh, and did you happen to note the boys grappling in the background of Cubby's garlic spread there? That would be Charlie holding on to Jack so he wouldn't get into the picture and get any of the credit for the garlic. This photo shows the scene even better. 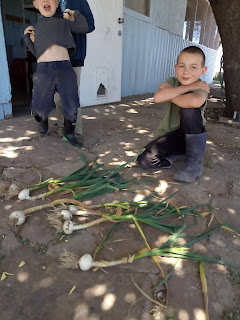 A literal snapshot of my life.