We spent most of this week either preparing to leave for New York, or driving to New York. Nonetheless, there was food. Always.

Long version: I made taco meat mostly so I could make a double batch and mix half of it with rice and cheese for a casserole to heat up on our trip.

I did not make the tortillas this time, which of course made me feel just the tiniest bit guilty. I knew starting to make my own tortillas would have a bad effect.

Long version:  A meal to finish up the mushrooms and lettuce, as well as the last of the cream cheese in the pasta.

Long version: Continuing the theme of using stuff up. After making this meal, all that was left in the refrigerator were condiments and the stuff that was going in the cooler in the morning. 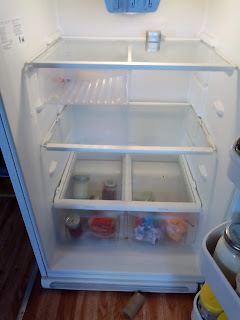 Plus an empty toilet paper roll in front of it. Naturally.

Long version: We left home at 5 a.m. and stopped for the day at Osage Hills State Park in Oklahoma about 12 hours later. All the food I had prepared ahead of time was fully cooked, frozen, and able to be re-heated in either a microwave or on a camp fire. This night, it was the latter.

The pork was country-style ribs I had cooked in the oven with a spice rub until I could pull them apart. I just put them in some aluminum foil and stuck it on the grate over our fire.

Oh yes. A yogurt starter is that important.

Long version: Oklahoma to the Mark Twain National Forest in Missouri. I had put this casserole in the disposable casserole pan we got Miss Rebecca's green chile casserole in, so I just set the whole pan right on the coals of the fire to heat up. It tasted kind of bland still, and all I had with me to season anything were mustard and ketchup, so I put some of both in there and called it hamburger casserole. It was fine.

Long version: Missouri to Cincinnati, Ohio. We stayed at a comparatively luxurious Red Roof Inn this night (hellooooo, hot shower, my beloved), so I heated these things up in the microwave in our room.

We all ate quite a lot of raw vegetables in the van throughout the trip--carrots, bell peppers, celery, cucumbers--so I didn't worry about serving more with dinner.

Long version: Cincinnati to Blackrock, and when we rolled up the driveway at 7 p.m., the wonderful MiL had dinner waiting for us. I was extremely pleased to not be digging around in coolers for food.