Long version: This was the night I rebelled at doing anything that would further heat the kitchen at 5 p.m. It was already 87 degrees then (in the kitchen--about 99 degrees outside), but since I had already planned for tuna salad and leftovers, it was okay.

The kids had the tuna salad sandwiches and the green beans, still frozen.

A. had some leftover pork and rice, plus some of the immature winter squash I had harvested and sauteed with onions and garlic earlier in the day.

I had some of the squash with refried beans I had made earlier in the day as well, plus some cheese.

And A. prepped some of his harvested garlic for storage this day: 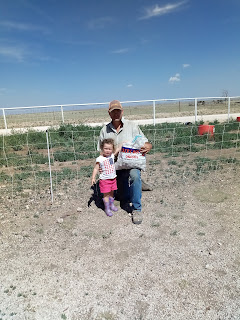 That bag of garlic weighs about as much as that girl in the purple boots. It's a LOT of garlic. And there's still more in the porch.

Long version: Another day of heat and a disinclination to cook. I took out another clearance package of meat A. bought, this one two giant bone-in chicken breasts. Early in the morning, before it was too hot, I poached them. Then I pulled the meat off.

Most of it I made into chicken salad. When I announced this plan to Cubby, he said, "Can't you cook it or something?" No, child, I can't. I'm tired of sweating while I cook. You'll eat it cold and like it.

The carrots were just carrot ribbons--made with the vegetable peeler--and put in the liquid left from when I made pickled garlic scapes. Yum.

Charlie and Cubby chose to have their chicken plain with curry dip to dip it in. The rest of the family had chicken salad. I had my chicken salad on lettuce with toasted pecans and some of the pickled carrots, and it was incredibly tasty.

Long version: A. bought a big 12-pound bone-in ham awhile ago, and I decided to cook it in the morning so as to have a ready supply of protein available for the coming days.

It took about four hours in the oven, and while it was in there, I also put in some potatoes. Just thickly sliced, then put in a covered dish with chicken stock left from making the chicken the day before, plus some thinly sliced garlic, salt and pepper.

Long version: This was Charlie's requested birthday meal. He always wants to have pasta with pesto for his birthday dinner. Thankfully, I actually have some good basil plants this year, so I had no trouble making that.

The only things I didn't have for this meal were the sausage and ice cream. The tiny store in the village actually had a couple of tubes of breakfast sausage, so that was taken care of. Ice cream is hit or miss there, and the only kind of ice cream at that store when A. stopped in after church was ice cream sandwiches.

Given the choice of going with ice cream sandwiches or driving 120 miles round-trip to get real ice cream, he went with the sandwiches. With those, and the chocolate chip cookies Charlie also requested and that I baked in a relatively cool kitchen at 6:30 a.m., I made a "cake." 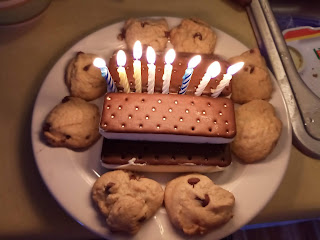 The kids were really excited about getting to have both an ice cream sandwich AND two cookies, each.

There are those low standards coming to my rescue again.

Long version: Charlie wanted to go camping for his birthday, so A. took all the children the day after. They went to a place about half an hour away.

I packed them leftover ham and potatoes; some antelope bites I had fried the night before after I took the sausage out of the pan; garlic bread I had made when baking bread on Sunday; canned sardines (a surprising favorite among the children); carrot sticks; chocolate chip cookies; and marshmallows.

I had some leftovers and a Sidecar while I watched a movie. Then I went to bed at 9 p.m. and slept until the indulgent hour of 6:15 a.m. It was glorious.

Long version: I made the sauerkraut a couple of weeks ago, just a small amount to see if it would work here. 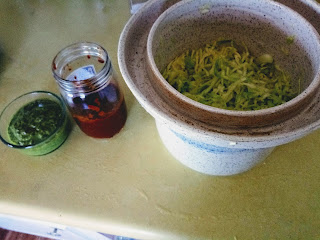 I also made pesto and hot chili sauce that day. It was very Christmas-y looking.

It's been a couple of years since I'd made sauerkraut, so none of the children remembered if they liked it or not. Three out of four did. Hooray! More sauerkraut, coming right up.

Long version: I canned the sauerkraut this morning and had one small half-pint jar left that I stuck in the fridge, thinking we'd probably eat it pretty quickly anyway.

And then it was all gone that night. The kids sure do like that sauerkraut. For now, anyway.

More than a Salad


This is what I had for lunch today: 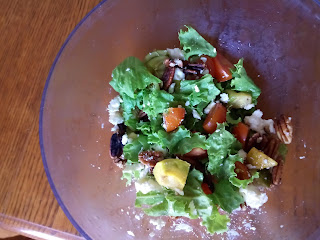 It's just a salad. Just a bowl of lettuce, tomato, sauteed squash, pecans and feta cheese*.

Except it's not just that.

It's the lettuce that A. planted for me last month so that I would have more when our winter-planted lettuce bolted.

It's the tomatoes I started from seed in March, even though last year's tomatoes were kind of pathetic and I had no great hopes for this year's harvest.

It's the squash that volunteered in the middle of the tomato plants and I left in even though I was sure the fruits would be those unappealing orange pumpkins that I don't actually want to eat as winter squash. Except this year I discovered I could eat them as immature squash in place of zucchini.

It's consideration, and hope, and experimentation, and work. All of that in a bowl.

And it was delicious.

* I very, very rarely have feta, even though I love it, but my brother-in-law brought it with him when his family came to visit. I didn't ask him to; he just did. So we'll add luck and family to that bowl, too. Nothing special about the pecans, though. I just buy them in bulk online.

Labels: all about me, country wisdom, fun with food, gardens 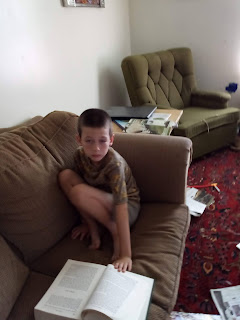 Happy birthday to
the incomparable Charlie.