Friday Food: On the Road


Just barely making it for Friday food this week, but it has been an . . . unusual week, shall we say?

Short version: Chicken, pork, potatoes, and s'mores on the beach

Long version: Our friends Jodi and Alyssa and their three children came down to our beach for one last cookout before we left. They brought the appetizers--chips and salsa, cheese, apricots, and blueberries, out of which I pretty much made my meal. We provided the meat and potatoes.

I didn't have time to boil the potatoes ahead of time like I was planning, so instead when I came up to the house to grab the meat, I quickly nuked the small new potatoes in a covered bowl and then put them on skewers for the grill. I also put butter, salt, and pepper in a big Tupperware, into which I put the potatoes when they came off the grill so they would get seasoned.

I also got all the stuff for s'mores, and then the boys had the brilliant idea of putting the remaining blueberries in their s'mores. They all loved this. I think it would be better with raspberries, myself, but it's a great idea. Cuts the sweetness a little. Not that kids care about that. 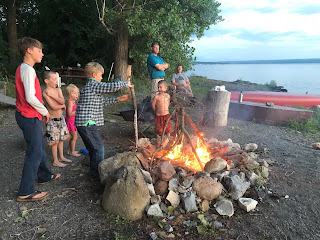 A bunch of little kids and a raging fire. What could go wrong? (Nothing went wrong.)

Long version: After another hectic moving blitz this day to get the remainder of our things into the U-Haul trailer, I was really, really tired. I had earlier requested that the MiL make pesto for dinner, because I had promised Charlie pesto one more time before we left and I no longer had access to a lot of fresh basil.

She made the pesto. I made the spaghetti and the salad (with a real tomato from the farmers market! hooray again!) and broiled some ham steaks.

Sucks we left New York at the beginning of tomato season. I sincerely hope I can find some to buy near us in New Mexico, as I will not be growing any this year.

Short version: Food I did not cook.

Long version: We left Blackrock at 6:30 a.m. and rolled into A.'s cousin's driveway in rural central Ohio at 5 p.m.

It was a long day.

I had enough food in the coolers in the van to feed everyone, but A.'s cousin's girlfriend (got that?) had already put a lasagna in the oven, to which she added extra venison. She also made garlic bread and, after dinner, s'mores in the oven. She made two s'mores for me, because she is one of the best hostesses ever, particularly if you come with many small children. Though she has no kids herself, she's one of ten children and has something like thirty nieces and nephews. That's the woman you want to stay with if you have a bunch of kids.

Long version: Ohio to Illinois this day. Every motel we stayed at--and they were all pretty rough--had a microwave. So we had previously made and frozen taco meat microwaved in our motel room on corn tortillas and cheese. Plus the carrots and cucumbers we had been eating in the car all day.

Long version: Illinois to Missouri. Another motel, another microwaved dinner. The kids wanted tacos again, so they finished that up. A. and I had previously made and frozen pulled pork with barbecue sauce. Plus the same vegetables.

The chips were from a big variety box of snack-sized bags I bought before we left because they were on sale. They were probably the most popular thing I brought with us. 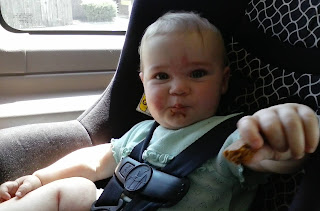 Although the molasses cookies the MiL made for us were also much in demand.

Long version: Missouri to Kansas. The Protection Motel in Protection, Kansas, had not only a microwave for our dinner, but three beds in our room. So no children had to sleep on the floor for the first time on this trip. Both the town and the motel have seen better days, but a triple-bed room makes up for a lot.

Long version: Kansas to our house in New Mexico. We made it here at 4 p.m. and of course, everyone needed to eat. I still had a container of previously made and frozen hamburger patties in one of the coolers, so I heated those up in a cast iron skillet on the stove. The baked beans--which I had also brought with us--had to be heated on the stove as well, because I still didn't have a microwave set up.

I'll bore you with some more details of our trip later, but that, at least, is what we ate for dinner while we were traveling. 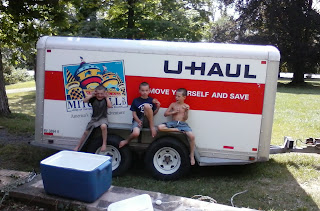 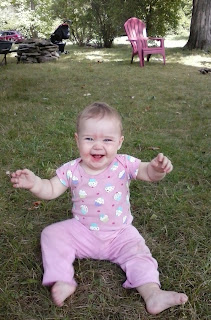