Short version: Pizza pizza (I hope you are also now hearing the Little Caeser's commercial in your head) 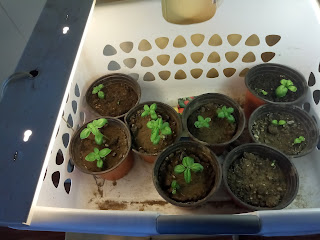 I even stole some of the tiny leaves from the juvenile basil in the kitchen for the vegetable pizza. The seedlings didn't seem to mind.

Long version: We went with my parents to the historic church about 30 miles away that only has Mass once a month. Since Mass was at 3 p.m., and the kids always want to run around outside that church, I packed a picnic for us to have after church. So we had chicken salad sandwiches, Fritos, cheese, Triscuits, carrot sticks, bell pepper slices, and grapes.

It was perfect picnic weather, and every single scrap of food was consumed. 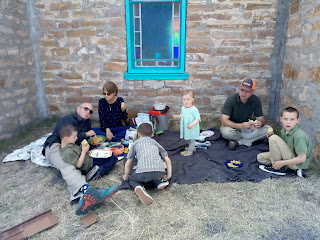 All the food that wasn't stomped on by Poppy-zilla, that is.

And one more photo, because the light in this one is very celestial: 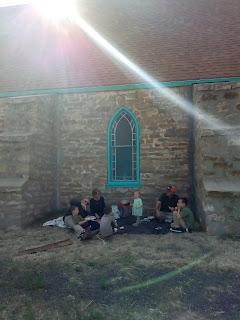 A benediction on the after-church picnic.

Long version: This was the last night my parents were here, and A. was all, "We can't let them leave without cooking some of the sheep!"

Actually, we probably could, but we decided to cook some anyway. This was half of the tenderloin that had been aging in the refrigerator. A. trimmed away most of the copious fat and stuffed sliced garlic into little cuts in the meat, and marinated it in salt, vinegar, and olive oil. A. claims that the vinegar marinade is the secret to making gamy meat taste acceptable. This meat wasn't actually gamy to start with, and the grilling over juniper wood probably helped, too, but it was very good, in any case.

The pie was one left at my parents' lodging by the lady who runs it. It was a store-bought frozen pie, but I swear it tasted homemade. No weird ingredients, not too sweet . . . I think even the MiL would have approved. The ice cream was pretty average, but you can't have everything.

Short version: Different for everyone, pineapple

Long version: This was Sheep Day. We--mostly A.--spent most of the day butchering the sheep, making stock, and rendering fat. So when 4:30 rolled around and I was faced with a kitchen crowded with pots and bowls of stock, Dutch ovens full of rendered fat, and pans of bones, I took the path of least resistance.

For the boys, I pulled meat off the bones removed from the stock, mixed it with some leftover barbecue sauce from the restaurant we went to with my parents for lunch on Sunday, and made them sandwiches. Poppy and Cubby also had some of the green chili hamburger soup Miss Amelia gave us on Saturday.

For A., I fried leftover steak in the bit of fat left in the Dutch oven from rendering. I topped this with half an avocado and some green chili sauce.

I made a salad with cheese, chicken, and avocado my parents left behind.

The last time I bought pineapple, it was unpleasantly acidic. This one was so sweet it literally tasted like pineapple-flavored candy. Next time maybe I'll get one somewhere between the two and it'll be just right.

Long version: Finally finished up the last of the sheep's tenderloin that had been hanging out in the fridge. It was marinated in olive oil, a little red wine, and garlic, and then I just pan-fried it.

Long version: I made pasta because I had pizza sauce left over from Friday. Then I took out ground beef. I couldn't figure out a good name for the meat things I made for this meal. They were just ground beef seasoned like meatballs, but without the egg and bread crumbs, and cooked flat like small hamburgers. Mini hamburgers? Flattened meatballs?

Then I remembered the tiny hamburgers called sliders that seem to be so popular. Once again, I am hip and cool. Ahem.

Long version: There are always a lot of gnarly bits left after butchering an animal. The pieces with sinew or fat or whatever. I have found over the years and the many animals we have butchered that chili is the best use for these pieces. So chili it was.

And this is how I found the time in the morning to make the chili (as well as yogurt) with a four-year-old and an eighteen-month-old in attendance: 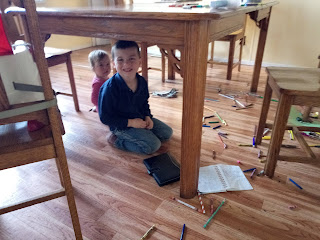 Motherhood often feels like a conscious weighing of mess versus peace. Is it indelible? Is it wet? How long will it keep them happy? How long will it take me to clean up? These are the choices I make on a daily basis.

I was going to make rice or tortillas and cheese for the kids, but then, as so often happens, I had to bake bread right before dinner. And there is nothing better than fresh bread with butter.

Go ahead and challenge me on this. I won't back down.


Okay. Time for me to eat crow. Or rather, mutton.

Remember when I was all, "Mutton is strong. Mutton is gross. I do not want to eat mutton.This wether is going to be disgusting and I want to get rid of it." Or something to that effect?

Well, I was wrong.

We ended up only having Big Boy for about 24 hours before A. decided it would be kindest to just slaughter him. Sheep are flock animals, and without his flock and in an unfamiliar place, he was very distressed and unhappy. So A. killed, skinned, and quartered him on Wednesday night and hung the meat up in the shed to age.

It was pretty warm during the days, but very cool at night, and the meat was in game bags to keep off any flies. A. also cut off the tenderloin and put that in the refrigerator to age. He decided to grill some of it last night. I smelled the raw meat. It had no smell at all that I could discern, so I allowed myself to hope that it might be edible.

Not only was it edible, it was downright tasty.

I've eaten some pretty good lamb and some pretty rank sheep in the last several years, and this was one of the best we've had. Not only was it not strong tasting, it didn't taste of lamb at all.

Never have I been more surprised.

I thought maybe it was because of the vinegar marinade A. used and the grilling over juniper wood. So today, when we butchered the remainder of the meat and A. made stock from the bones, I tasted some of the meat from the boiled bones.

Nothing. No lamb taste. It may as well have been beef. Even the fat A. rendered doesn't have an unpleasant sheep-y taste.

I don't know if it's the breed, the fact that it was a wether, or the aging process--or maybe a combination of those factors--but whatever the reason, I'm very, very happy to be proven wrong.

I'm still going to leave the line-dried sheep jerky to A. and the boys, though. 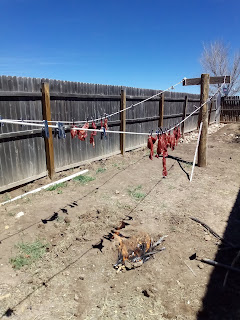 Labels: all about me, country livin', fun with food, sheep, the A team
Newer Posts Older Posts Home
Subscribe to: Posts (Atom)