"Mom! Get the camera so you can take a picture of me holding Jack!" 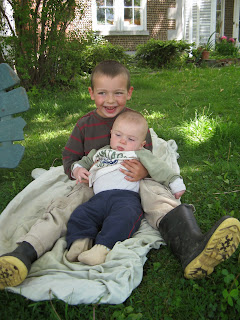 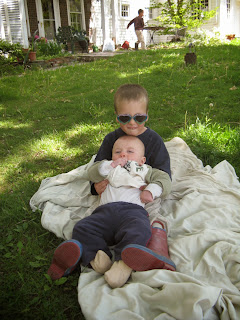 Should you find yourself one fine May in possession of three bags of very elderly apples that have been in storage since the fall and are therefore waaaay past their peak flavor . . . make applesauce and add some rhubarb to the apples. It won't taste like really great applesauce made in October from really great apples, but it'll be better than storebought. Not that that's much of a standard.

If you, like me, have never experienced the joy of carnitas, go get yourself some pork butt and make some. Just chunk up the pork, add whatever spices you want (last night I actually used apple cider vinegar, garlic powder, and caraway seeds to make, uh, German carnitas, I guess), barely cover with water, simmer until tender, uncover and cook until all the water is gone and then the meat fries in its own fat.

This does not sound all that appetizing. It is. It is also incredibly easy because there's no annoyingly spatter-y browning of the meat first or gross wet boiled fat on the meat at the end.

I don't know how I lived for ten years in Arizona without having any idea what carnitas are (is? weird one), but I don't want you to be similarly deprived.

That's all. Carry on.
Posted by Kristin @ Going Country at 3:36 AM No comments:

It Happens To the Best of Us

The MiL, kind soul that she is, frequently tells me how everyone she knows thinks I'm just the best mother. That's nice. I appreciate the validation.

Then again, I locked my children out of the house today. On purpose.

They continued this all the way until I was trying to make dinner and Jack was happily kicking on the floor and they WOULD NOT leave him alone for the love of God and then Cubby came up with this great plan where Charlie would run up and spank me (Charlie always gets delegated the dangerous jobs) and my surprise would be so great that Cubby could snatch Jack and run off with him.

Good plan, right? Too bad they hatched it in the room I was actually in at the time, so I was forewarned and already pissed off.

So Charlie ran up and spanked me and I hauled both him and his brother (Cubby obviously, not Jack) out the door and locked it. And then I locked the other two doors (yes, there are three doors into our kitchen--old house) and watched them run all around trying the doors and pounding on them.

They thought this was a great game. So did I.

Of course, it ended about three minutes later when the MiL came home and I unlocked the door for her to come inside. But by that time I had regained some measure of calm--a very, very small measure--and could once again converse with my children in a way that did not involve shrieking. By me or them.

So. For all you mothers out there who sometimes lose it and do things like lock your children out or yourselves in just to get away from them for three blessed minutes? You're still a great mom. It's not you; it's them.
Posted by Kristin @ Going Country at 4:54 PM 4 comments: