My parents are leaving this afternoon for their long journey back to Tucson, which means that I must now say goodbye to pretty much the best mother's helper EVER.
Seriously. If you ever have a kid, you should try to get my mom to come to your house for a few days. She just scoops that child up, and they're off to the races. I've barely seen Cubby for the past few days.
Unfortunately for you, I think this service is only available to her actual children. Too bad. It's pretty awesome. I don't know how I'm going to go back to my previous juggling act of Cubby wrangler, cook, and canner.
Cubby's going to miss his Nana too, I know. I mean, wouldn't you? 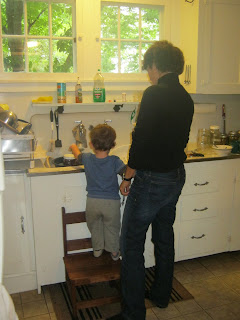 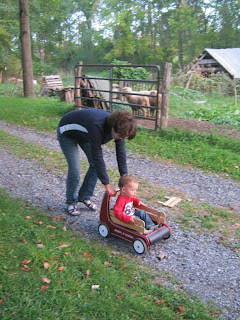 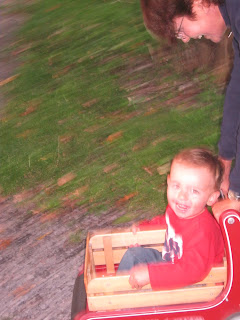 That Time I Was Incredibly Stupid

Okay, so there may have been more than ONE time. But let me tell you about this particular time. Which happened yesterday. When I was canning my shitload of pickled jalapenos.
Yeah. They were supposed to be pickled anyway. I got my brine all hot, heated my enormous pot of boiling water, and had my dad chop all the peppers* because he apparently has no feeling left in his fingers and chopping two gallons of hot peppers doesn't bother him in the slightest. Besides, I always put my visitors to work.
I loaded up the jars, poured in the brine, plopped on the tops and screwed on the rings, then put them in the canner.
Then I realized I had neglected to put any vinegar in my brine. So. Not so much with the pickling then, huh?
Shit.
So I took them all out of the boiling water, unscrewed all the rings, took off the lids, and strained the peppers through a sieve to get rid of my useless, vinegar-less brine. And it made me want to die.
Not because of the waste of time or the irritation at being so incredibly dumb. But because physically I was a mess. The peppers had been heated, you see, in the liquid. And so they were releasing whatever volatile compound it is that causes irritation to the eyes, nose, and throat. It was like chemical warfare in my kitchen. I was sneezing and coughing; streaming tears; and cursing the peppers, myself for being so stupid, and the universe in general.
It was not a good time.
However, I did get all the jalapenos (nine pints) safely encased in their proper vinegar brine and all the tops sealed. So now I can give them away to other people because I DON'T EVEN EAT THEM.
Yeah. So that was the time I was incredibly stupid. I hope you enjoyed the tale of my idiocy. Check back tomorrow to see what other brain lapses I might have. Fun.
* Oh, right. Did I not tell you my parents are here for a few days? They are. Say hi to my mom and dad!
Posted by Kristin @ Going Country at 4:03 AM 5 comments:

Labels: all about me, family, fun with food

A Rite of Passage

I submit that you don't feel like a real parent until you've been puked on by your child. There's really nothing like someone else's nice, warm vomit running down your neck to make you feel that yes, you're really taking care of this small person NO MATTER WHAT.
Perhaps you can guess that Cubby was sick yesterday? Indeed. He woke up from his afternoon nap in a pool of his own vomit*. Just like a college frat boy, except without the fun night of debauched alcoholic consumption that usually leads to such a result.
Poor kid. He was a mess. A disgusting, cheesy-smelling mess. I put him right in a bath and then spent the next hour or so holding him while he clung limply to my neck. The very same neck he then threw up on at least once before I got smart about it and started draping myself in a towel.
Kids are really gross sometimes. In case you didn't know.
This is the first time in his entire short life that he's vomited, and I think he just really didn't know what was happening. He was surprisingly stoic about it, actually, perhaps due to his confusion about the whole thing. After about an hour, though, he perked up enough to ask after the dogs and soon he was running around as if he had not puked on me a mere hour before.
If only we were all so resilient.
Here's hoping today features much less disgusting bodily fluids. I don't ask much, really. A day without vomit would do nicely.
* Vomit that included the remains of some blueberries. It was . . . very colorful. I'll leave it at that.
Posted by Kristin @ Going Country at 3:57 AM 6 comments:

Labels: all about me, Cubby

You may have noticed that I have not been blathering on incessantly about the tomatoes.
Or maybe you haven't noticed because you have other things on your mind. Things like a job or children or a mortgage or the fact that you can't find your very favorite pair of shoes that you wore all the time last winter and so you aren't really sitting around wondering about the state of my tomatoes.
But I'm going to tell you about them anyway, because the state is sad, duckies. It is very, very sad. It's worse than the year the Blight hit, even. There just . . . aren't any tomatoes. I guess the drought that lasted all of July came right when the plants would have been setting all their fruits. So there are no tomatoes. The plants look okay, but they just haven't produced anything.
Well, not anything. Just not much. I have a normal-sized bowl of tomatoes on the counter. But not the Dish Pan. And without the Dish Pan full of tomatoes, there is no canning. So far I've canned only eight pints of salsa. That's it. No plain tomatoes at all, no sauce, no juice, no NOTHING. I'm going to have to try to buy some tomatoes to can, but I don't think anyone has very many tomatoes in this area this year, so we'll have to see about that.
And that's why there's no Tomato Crazy this year.
However! We will make up for it with the Jalapeno Crazy, because GOOD LORD did the jalapenos like that drought. I have MASSES of jalapenos. HUGE jalapenos. I have more jalapenos on my counter right now than tomatoes, which is totally unnatural. Too bad I don't really even like jalapenos much. But I'll pickle them all anyway, because A. and the MiL like them, and my brother, dad, and sister-in-law LOVE them. So I guess I'll be giving away a lot of pickled jalapenos this year.
Also crazy? The pears. They will destroy me. A. and I finally picked the Bosc pears from our tree last Sunday. There were a shitload of pears on that tree, y'all. You may recall I already have 35 quarts of pears in the cellar. I think I'm going to end up with at least twenty more quarts. That's right. That's 55 quarts of pears.
The tomatoes may suck this year, but the Crazy lives on.
Posted by Kristin @ Going Country at 4:04 AM 8 comments:

So many of you seemed confused as to what one does with a squirrel after squirrel hunting. Ya eat 'em, y'all.
Well, at least we usually do. In this case, A. gave them to the neighbor on whose land he was hunting, as a goodwill gesture. And yes, it is a goodwill gesture in her case, because she grew up eating squirrel and loves it. Since you can't exactly pick one up at your nearest Safeway, she's thrilled when A. gives her some squirrels.
That's the kind of neighbor we like.
But we eat them when we're not giving them to the neighbor. Last time we ate squirrel was the night before I went into labor with Cubby. Someone suggested that perhaps there was a connection there. I'll let you know if I ever have the opportunity to test that hypothesis again.
A. brines them after they're skinned and cleaned. This probably results in a milder flavor, as it draws a lot of blood out. We usually cook them in a stew, and they taste like . . . well, like braised meat. I dunno. They certainly don't have a gamy flavor. I guess like dark meat chicken? Or extremely mild beef? Whatever. It tastes like squirrel. Because that's what it is.
So that's what you do with squirrel. Or at least, what we do with squirrel. Oh, and if you save the tails and dry them, there's a company that will take them in exchange for free fishing lures. I guess they use the fur to tie flies. So now we have four squirrel tails sitting in our shop, drying on a board. Lovely.
Posted by Kristin @ Going Country at 3:41 AM 5 comments:

Labels: animals, fun with food, the A team, wildlife

You want pictures? You got it. 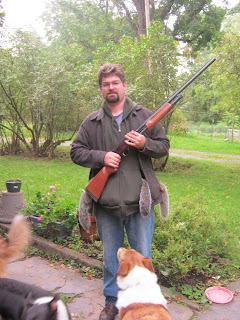 This is my husband. There's really nothing more I can say about this.

A. went squirrel hunting yesterday morning, returning with four quite large squirrels that he then proceeded to skin and gut on the patio table outside the dining room. While he was in the middle of this appetizing procedure, the guy arrived to deliver our first load of firewood for the winter. He was supposed to come at nine, but arrived early. The sheep had been let out to wander around, so the Deterrent was up to keep them away from the road.
All of this meant that when the nice man came to deliver our wood, A.'s hands were covered in blood and he had a bucket of bloody squirrel bits next to him as he whacked off tails and feet with the cleaver; I was in my slippers running around with a barefoot child to take down the Deterrent, direct the man where to dump the load of wood from his truck, and write him a check; the dogs were hanging around because they wanted those squirrel bits or the peanut butter and bread that Cubby was eating; and the sheep were milling around maaing and waiting for their chance to eat the nice flowering plants the MiL has in pots near the house. Plus, the chickens were out near the patio scratching around.
Welcome to life at Blackrock. It's never dull, at least.
Posted by Kristin @ Going Country at 5:35 AM 6 comments: