The Magic of Disney, Indeed


A couple of weeks ago, I was singing the Cinderelly song from the original Disney Cinderella movie, and Cubby asked me where that song was from.

He'd never seen Cinderella? Well, we must remedy that.

So I got the movie for the boys to watch.

But then we got to the ball. And when the prince and Cinderella started dancing, the older boys got all squirmy.

Then Charlie said, "I wish the prince would get flushed down the toilet."

Not to be outdone, Cubby added, "I wish they would dance over a toilet and Cinderella would flush the toilet and FLUSH! The prince would go down the toilet."

Friday Food: Grilling Is the Alpha and the Omega


I seem to keep coming full circle on either my food or choice of cooking medium.

Long version: This was not at all my plan for dinner. I had thought it was going to be cooler, so I took out ground beef to make taco meat. I had the Mexican slaw made and everything. Then I realized that it was not at all cooler. In fact, it was just as hot as the day before. And then when I tried to turn on the air conditioning at 2:30 p.m., it didn't work.

There was no way in hell I was going to be simmering taco meat for 45 minutes in an 83-degree house with the afternoon sun blasting through our stupid west-facing picture window.

So instead I took out pork chops from the freezer. At 2:30 p.m. The house was so hot that they were almost all the way thawed at 5 p.m. when I put them on the grill. There's the silver lining, I guess.

I microwaved the sweet potatoes for a few minutes before wrapping them in foil and putting them on the grill too.

The dinner rolls were the same ones the MiL had brought us. The salad was made with already-washed lettuce and dressed with already-made ranch dressing.

Boom: Dinner with no cooking in the kitchen.

I am a magician.

My magic touch was confirmed when I transformed three cranky, squabbling boys into fun-loving compatriots by letting them eat their dinner with their hands while sitting on a blanket on the porch and then running through the sprinkler.

Long version: For the second night in a row, I planned on tacos and then didn't make them. My planned trip to the grocery store turned into a family outing with a stop at the playground, and I decided to just buy prepared food at the grocery store for dinner so I wouldn't have to cook for once.

It reminded me of WHY I cook, though. The total for all of this was $15, and it really wasn't enough food for all of us. I really should have got two chickens, but at $7 each, I just couldn't bring myself to do it.

Plus, it didn't taste nearly as good as homecooked food.

The kids were happy, though. I even acquiesced to a seedless watermelon, and you know how I feel about those.

Long version: And on the third night, there were tacos. I was the only one who ate the Mexican slaw (cabbage, shallots, vinegar, cumin, salt). The lettuce and salsa on the tacos counts for a vegetable, right?

Customizable food: It's what's for dinner.

Meanwhile, on the kitchen floor . . . 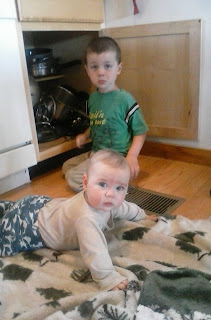 Long version: Is there a less appetizingly-named cut of meat than "pork butt"? No. Tastes good, though.

So I discovered a few months ago, while trying to find a use for the enormous bag of bread crumbs that had accumulated in the freezer, that I actually prefer bread pudding made with bread crumbs instead of bread cubes. It has a more uniform texture. Granted, my bread crumbs are just the ends of sourdough bread that I quickly whiz in the food processor, so they're much chunkier than the dry breadcrumbs in the cans or whatever. I would never make bread pudding with those. Gross.

Bread pudding is an excellent use for the fresh breadcrumbs from homemade bread, though. You have to either use slightly less bread or slightly more liquid, however, as the crumbs when measured actually result in more bread in the recipe. I use a Christopher Kimball recipe that calls for a 2:1 ratio of milk to cream, and a LOT of nutmeg.

I seriously love nutmeg. And I didn't drop it in the milk mixture this time. I win!

Long version: A. left at 1:30 p.m. to go the post office. When he hadn't returned by 3 p.m., I made a wild guess that he had taken the opportunity to go fishing in the spot near the village that he likes. Sure enough, he came home at 3:30 p.m. looking sheepish and holding two small trout. He told me they were in his post office box.

He's a funny one.

He fried them whole in bacon grease for Cubby and Jack. Charlie isn't so much into fish.

The carrots were nice and clean, though. Particularly since I cooked them in the microwave.

Long version: It's amazing to me how the green garlic (which is just immature garlic plants, just like scallions are immature onions) loses so much of its flavor when cooked. The raw green garlic is like, "WOAH, NELLIE! Take that vampires!" And the cooked garlic is all, "What did I just eat? Cucumbers with a hint of garlic?" I can't quite figure out the best use for it, is what I'm saying. I think possibly finely chopped and sprinkled over tacos has been the best I've found so far. Any suggestions?

The Return of the Countdown Candy


The school year in New York goes waaaay too long. Cubby and Charlie's last day of school isn't until June 22. The weather feels summery, everyone has trouble going to sleep because it stays light too late, and everyone has a really hard time getting up in the morning due to the late bedtimes.

Last year I had some problems with reluctant boys not wanting to get on the school bus towards the end of the year. I got tired of cajoling and threatening and forcibly leading them out the door, so I decided bribery was definitely the answer.

Thus, the tradition of Countdown Candy was born.

I asked A. to get me some kind of small candy at the store. He chose Reese's Pieces, which I of course approved of. Then I put three Reese's Pieces in each cup of an egg carton--one for each boy*. After everyone was ready for the bus, including backpacks on, they got one Reese's Piece (I suppose that's the singular form) on their way out the door and we counted the cups that still had candy in them to see how many days were left.

We haven't had so many bad mornings this year, but I've been waiting until there were only twelve days left of school anyway. Today is the day. The Reese's Pieces are in their egg carton, ready to count down the final days of school.

The Countdown Candy is sweet, but the end of the year is sweeter still. We're almost there. Twelve days and counting . . .

* No, Jack does not actually get on the bus, but he always came outside with us to wait, and do you think he's going to watch his brothers eat candy at 7:15 a.m. without demanding his own? Ha.
Posted by Kristin @ Going Country at 3:15 AM 3 comments:

Me: Oh yeah? What's good about being a grown-up?

Jack: Yeah, because I love cheese. And I can have coffee! And BEER!

So, heavy machinery and gluttonous consumption. Sounds like a plan to me.

* So far on Jack's list of dream machines: motorcycle, dump truck, pick-up truck, Jeep, excavator, riding mower, weed trimmer . . . I think he should just own an equipment rental company and live the dream day in and day out.
Posted by Kristin @ Going Country at 10:03 AM 2 comments:

A Bicycle Ride for Two

Early this morning while hanging out with Poppy, I had a train of thought that went like this, "I guess I'll give the kids Baca toast* for breakfast. Except we're out of honey. I could go get some from the honey stand down the road. Seems stupid to drive such a short distance, though. Hey, I could ride the bike."

So when A. woke up, I told him I was going to ride the five miles to get honey. Cubby was the only boy awake at the time, and he begged to go. I couldn't refuse. 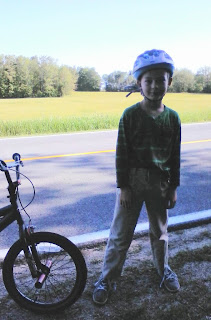 This was the darkest photo ever, which I only semi-successfully managed to lighten in editing. 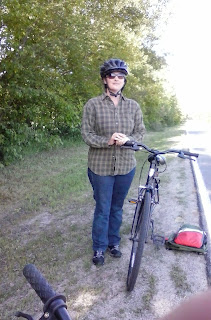 Cubby's photography skills are obviously much better than mine. (Although I do not know why I look so short and squat in this photo. Maybe because I'm downhill of the photographer?)

It was a perfect morning for a bike ride: 60 degrees and sunny with a light wind. This road is very rural, with hay fields and woods all along the way. We only saw three cars the whole 40 minutes. The 2.5 miles to the honey stand are slightly uphill, but then the whole way home is coasting downhill. Cubby was so happy to be with me, I couldn't be disappointed that my solo bike ride had become a bonding experience.

He dropped the following gems at different times on the ride:

While coasting fast downhill, "We're really leaving our worries behind now! Even they can't go this fast!"

And at the very end, where the slope is steepest and we were really whipping right along, "I don't know why, but for some reason today I feel the need for speed." 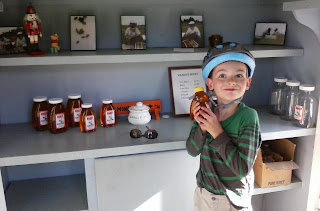 And there's the speed demon himself, clutching his prize.

When we got home, Cubby actually elected to have cinnamon toast rather than Baca toast, so I guess the trip for honey was unnecessary. In this case, however, it was definitely the journey and not the destination that mattered.

* Baca toast is toast with peanut butter and honey. It's named for my dad--given the moniker "Baca" by the first grandchild--who frequently has this toast for breakfast. It's a weekend treat at our house, given its drippiness and likelihood of requiring a change of clothing.