Cubby has been badgering the MiL for about a month now about riding a pony. The MiL, being a regular horse rider herself as well as a woman with a large circle of acquaintances, knows not one, but two people with ponies. So she finally set up a time last night to bring Cubby to a friend's property to ride.

Charlie and I went too, of course. You think Cubby is going to go visit a pony and leave Charlie behind? HAHA NO, said Charlie*. So off we all went after dinner last night in search of adventure in the shape of a small pony.

Ponies don't actually look all that small when you're only four years old, however. 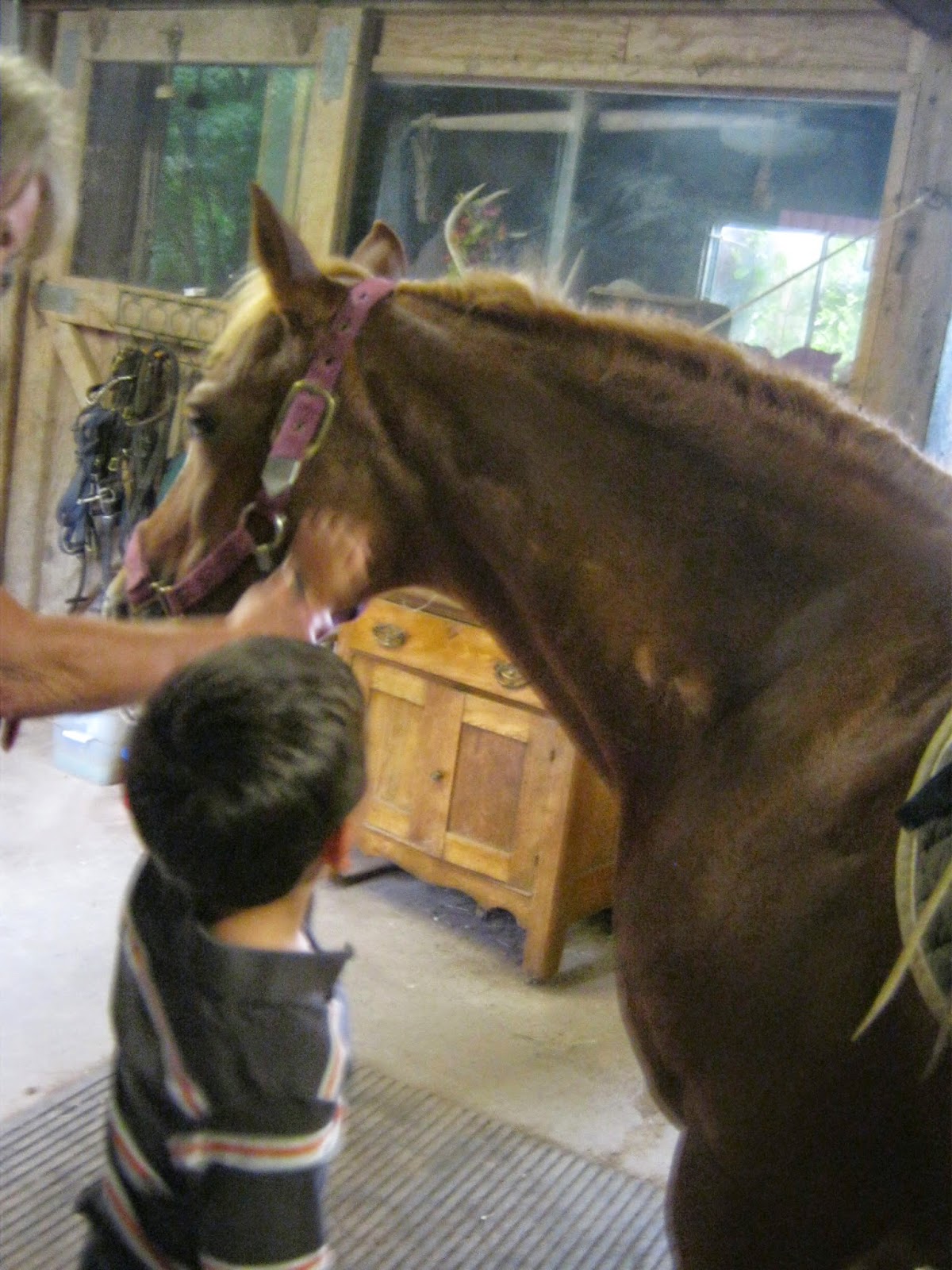 And I bet they really don't feel that small to a four-year-old when he's perched on top of one, wearing a helmet "just in case you fall!" 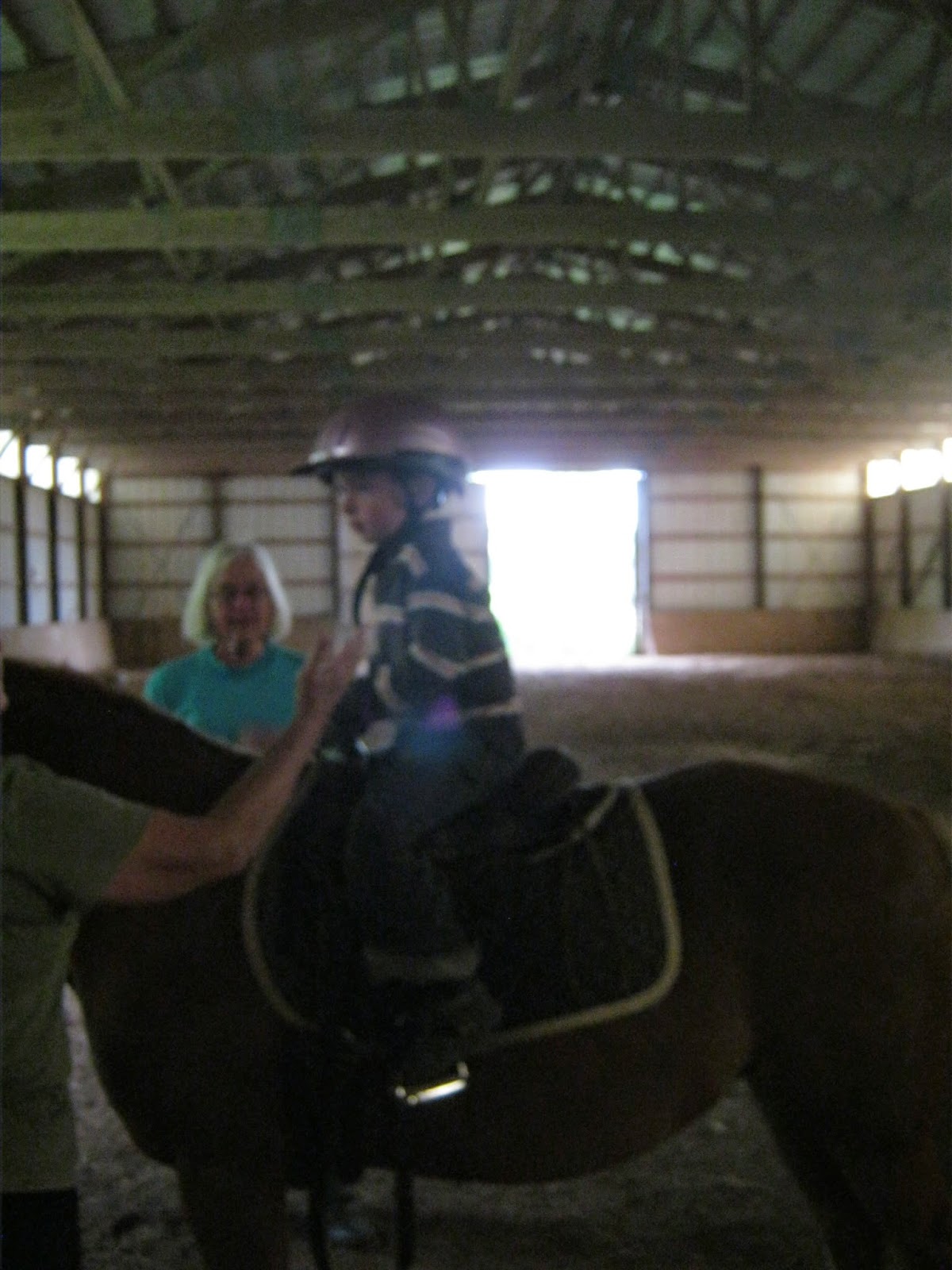 Also wearing his sandals with socks under them because I couldn't find his shoes. Appropriate footwear? What's that?

The lady who owns this pony--who is, incidentally, the sister of the MiL's riding instructor and has great-grandchildren she is teaching to ride on this pony--led Cubby around the arena for awhile, instructing him to sit up straight, look right between the pony's ears, and sing.

I think the singing was just to keep him relaxed. In any case, it was pretty funny to watch him very seriously clutching the pommel of the saddle, singing "Twinkle Twinkle, Little Star" as he rode around. 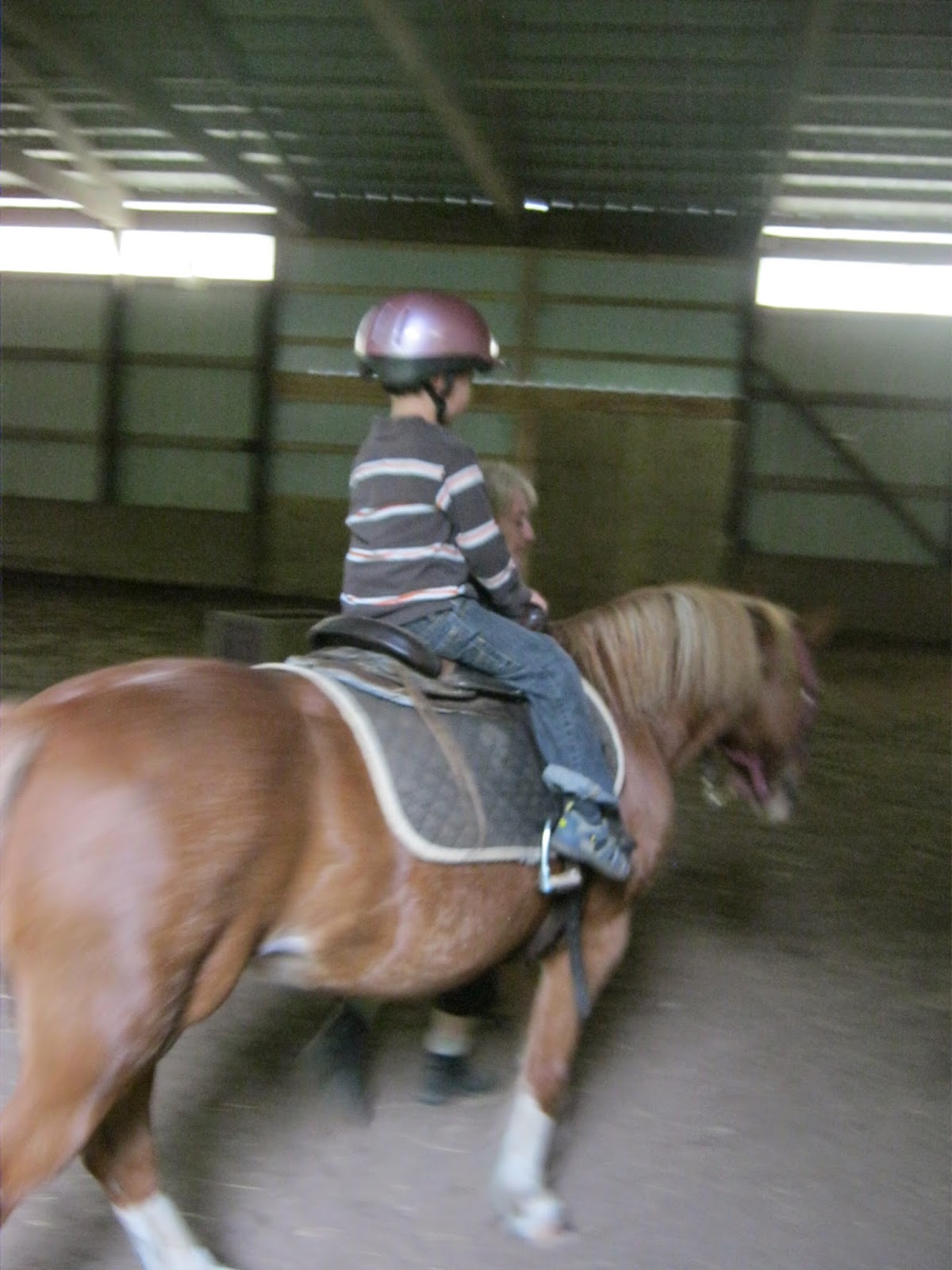 "Old Macdonald Had a Farm" might also have been featured.

Cubby seemed to enjoy it, but he was ready to get off after about fifteen minutes. And then, of course, we know what had to happen next. 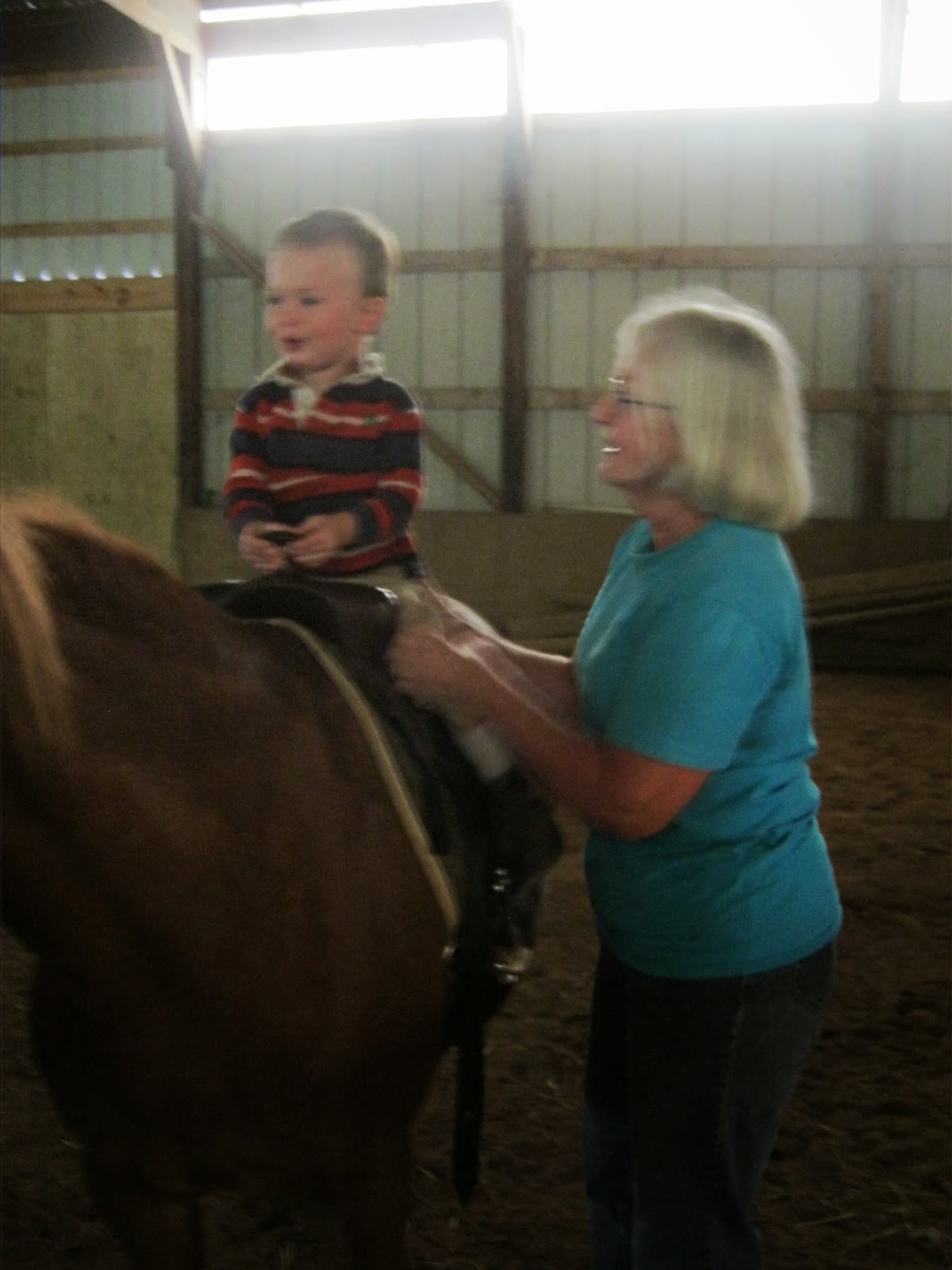 Charlie only sat up there for about thirty seconds before the pony decided she was done and started stomping irritably. So that was the end of the riding.

But there was more fun to be had! While the MiL was in the house having a glass of wine with the pony's owners, the resident dog decided it was time he had a little attention. He was a really good dog. 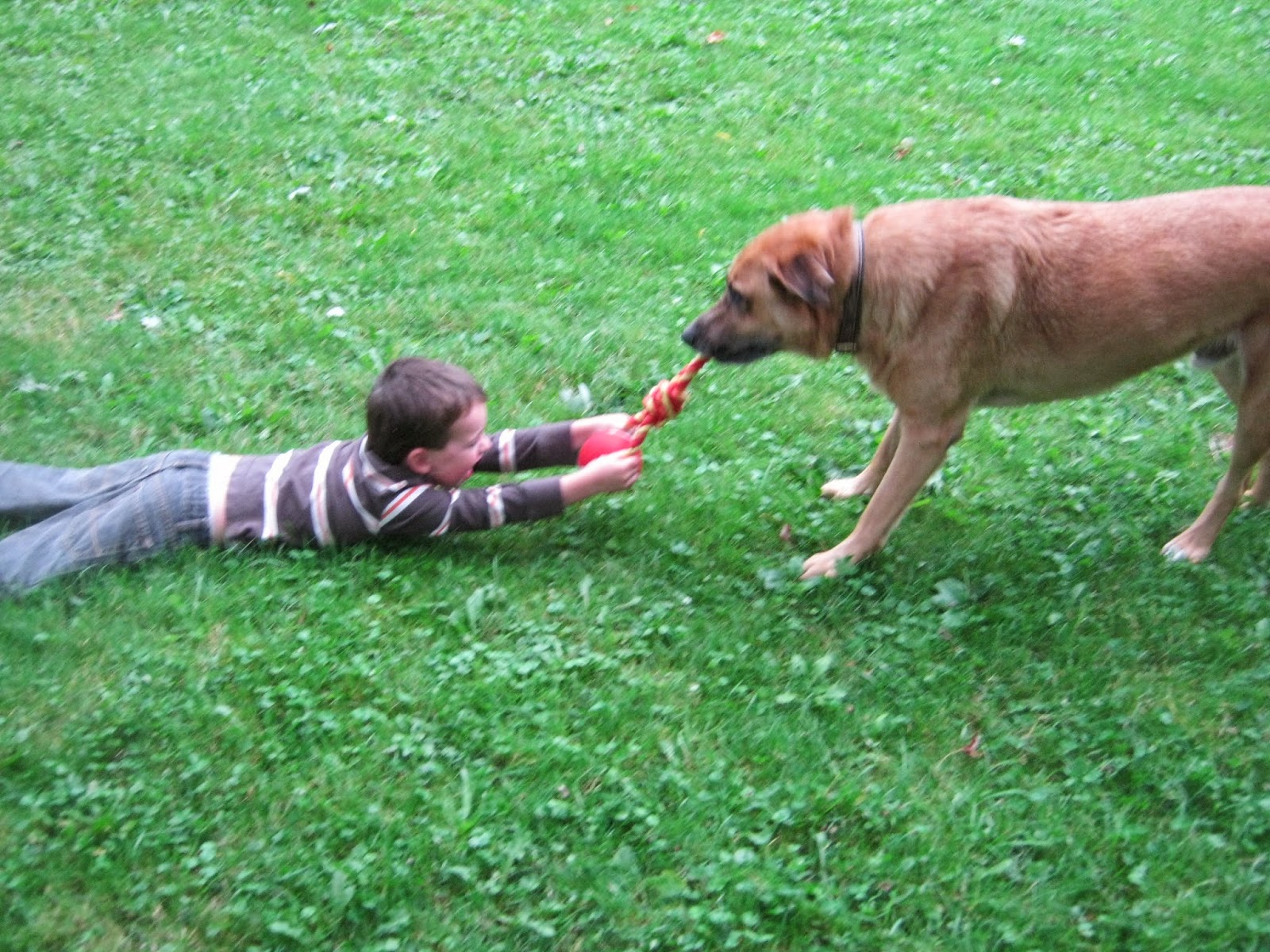 And Cubby totally lost their game of tug o' war.

Tearing Cubby away from his new best friend Mack the Dog was not without drama (read: enraged screaming), but we did eventually get back in the car to go home to bed.

Cubby is already asking when he gets to go back. That's kind of up to the MiL. Maybe I should find his shoes before then, though. You think?

* What he actually said is, "Charlie? Pony?" over and over and over ( AND OVER) again. And then again, in case I was so foolish as to think of leaving him behind.
Posted by Kristin @ Going Country at 10:32 AM 6 comments:

I really like spaghetti and meatballs. Who doesn't, really? Unfortunately for me and my meatball fondness, I really do NOT like the making of said meatballs. At least, not the standard way of making them: soaking bread crumbs (which I can't use because of the gluten issues in my household) in milk, beating in the eggs, sauteing the minced onions because I can't stand big bits of half-raw onion in my meatballs, forming every meatball individually, browning them all with the accompanying grease splatters, and then the inevitable falling apart in the attempts to turn them in the pan.

And after all that, there's still the chopping and sauteing and simmering to make the tomato sauce that the meatballs go in.

I am far, far too lazy for all of that. Which is why I usually cop out with meat sauce instead. This is inevitably disappointing, because in the end, it's just not a meatball.

First I made the sauce. In the food processor. This idea I think I got from an old Cook's Illustrated recipe for a fresh tomato sauce. In this case, I just combined a big can of whole tomatoes (minus a little juice so it wouldn't be too thin), garlic, onion, basil, oregano, a tiny bit of vinegar, and an even smaller amount of sugar. Liquification--with a few chunks left--followed via machine and there was my sauce.

No chopping, no sauteing, no extra pan.

Next, with the remains of the sauce still coating the food processor, I combined all the meatball ingredients except the meat in the food processor. In my case, that means rice, eggs, garlic, onion, basil, and oregano. Whizzed the shit out of all of that until it was pretty smooth and then mixed it with the meat. The idea for this came from the kibbeh recipe I use, except I elected to keep the meat out of the food processor, mostly because it's a bitch to clean afterwards.

No soaking of crumbs, no mincing and cooking of onions, no beating in eggs with a spoon.

Next I adopted the cooking method from The Pioneer Woman's BBQ Meatballs, which is just to bake the meatballs in the sauce. She says to brown them first on the stove. I say, they're already in the oven and what is a broiler for? So I browned them under the broiler first, drained off some of the resulting liquid, covered them with the sauce* and let them bake away.

No spattering grease, no filth on the stove, no falling apart.

And that was it. One food processor, one Pyrex pan, zero grease splatters, delicious spaghetti and meatballs. My life has been revolutionized. And it only took 34 years.

* Next time I'm going to make more sauce, because after baking with the meatballs for 45 minutes, it had reduced so far there was just barely enough for the spaghetti.