In Praise of the Third Child

Jack is four months old today. He doesn't get much airplay here, but that's only because he's so laid back that it's easy to just take him for granted. I really shouldn't do that, though, because really, this kid is just plain awesome. 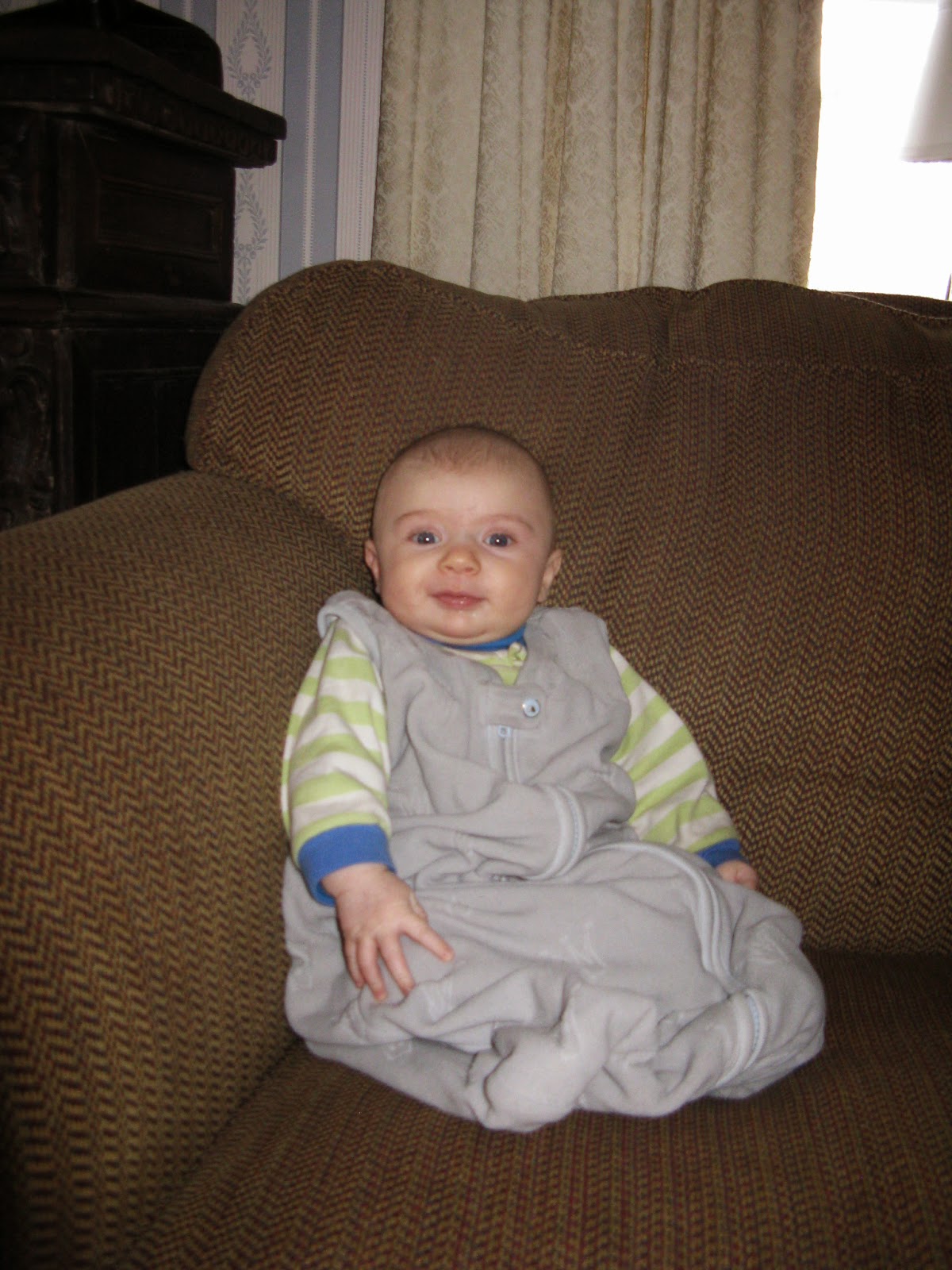 Oh, you wanted to vacuum, Mom? That's cool. I'll just sit here on the couch and smile till you're done.

He goes hither and yon with nary a word of complaint.

He grins all the way through the grocery store.

He patiently endures his older brothers' perpetual obsession with petting his head; I might even say he enjoys it.

He kicks it on the sheepskin while I make dinner, sucking his fingers and flailing about.

And he sleeps. Like a dream. Like a miracle. Like one of those babies I was sure were mythical, because it's just not possible for a four-month-old baby to go to bed at 8 p.m. and wake up at 7 a.m. (or later). But Jack does. Okay, sometimes he wakes up at 3 a.m. or 5 a.m. to nurse, but often he doesn't.

I can't tell you how life-changing it is to have an infant who actually sleeps. It's almost like not having a newborn at all.

I guess he's not really a newborn anymore, anyway. 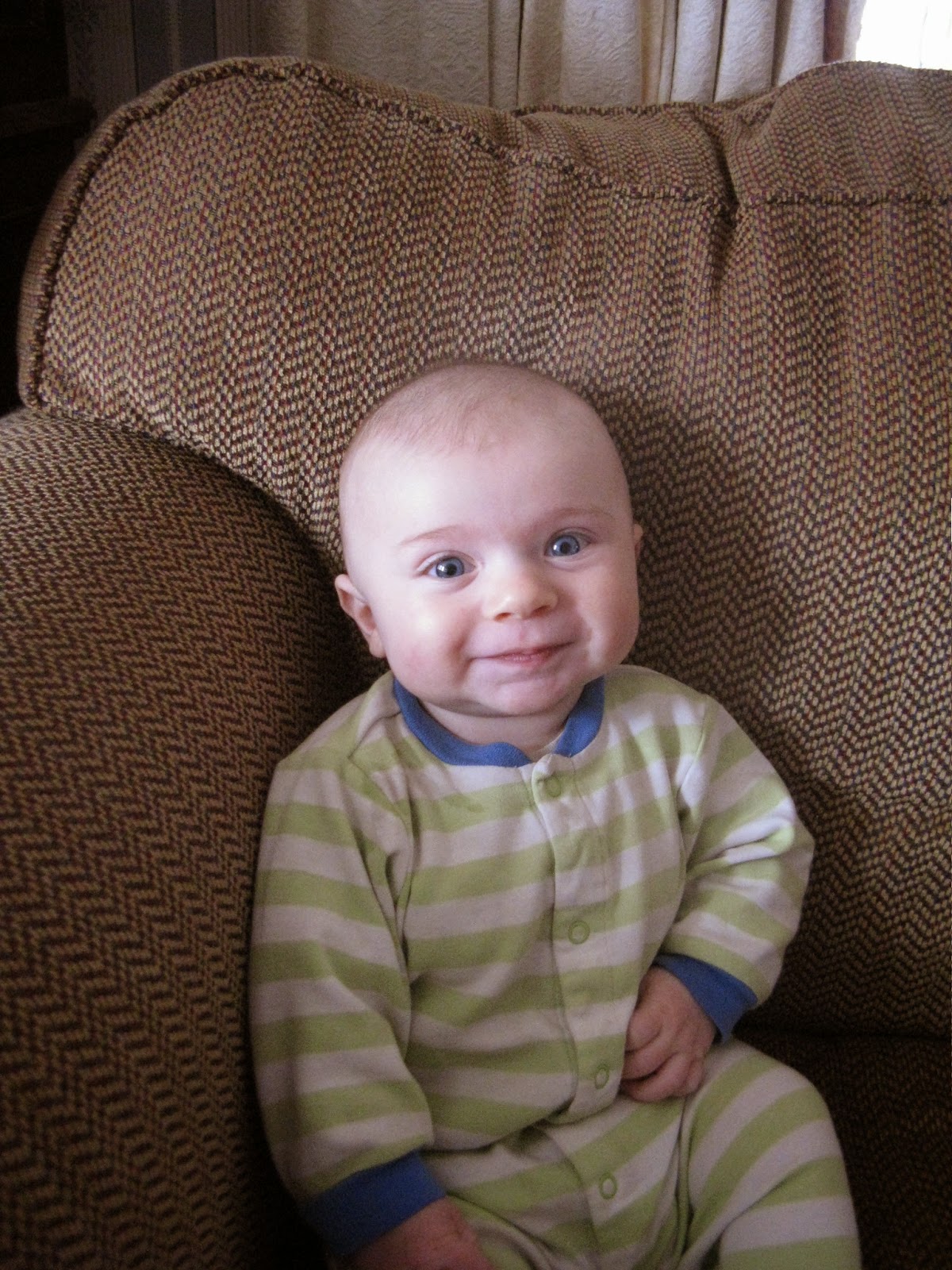 Will She or Won't She?

There is obviously a burning curiosity among you--based on the, um, one of you who asked--about the garden this year.

The short answer: We got a CSA subscription for the summer.

Obviously, that means that I am not planning on growing the majority of our vegetables myself this year. In fact, I'm not planting anything.

I really had to do it. Because the long answer is that I have not enough time nor physical stamina to deal with our excessively large garden, which has been pretty much choked by weeds in the past few neglected years. A. set up electric fencing around half the garden and the ducklings are out there, for weed and pest control purposes. The MiL will plant potatoes in the rest of the garden, I think.

I thought about putting a few things like lettuce or pole beans in a random raised bed we have at the edge of the garden, but the deer have gotten so aggressive recently that I figured they would just eat anything I put out there. So I won't even do that.

Literally the only thing I'm planning on putting in dirt is a single tomato plant in a pot by the kitchen door. I am not particularly happy about this, and I so wish I had the time and the strength to work in the garden, but, well, I don't. I've finally accepted that I need a summer off, and hopefully next year I'll get back to it, with a less weedy and somewhat workable garden.

Oh, and someone else wanted an update about the washing machine. Truthfully, I've been having some issues with the soaking off and cleaning of mud, which I do a lot, obviously, and which was kind of the main reason I wanted a good washing machine. The water level on the soaking setting doesn't seem to get to the top of the machine, so I can't fill the machine with dirty clothes to soak. I've never actually read the manual for the machine, so it's possible it will tell me that it can only be filled partway or something.

I guess we're too dirty even for a Speed Queen.

Labels: all about me, domesticity, gardens, randomness

At five o'clock yesterday afternoon, Cubby and Charlie appeared looking like this, giggling conspiratorially* and asking . . . 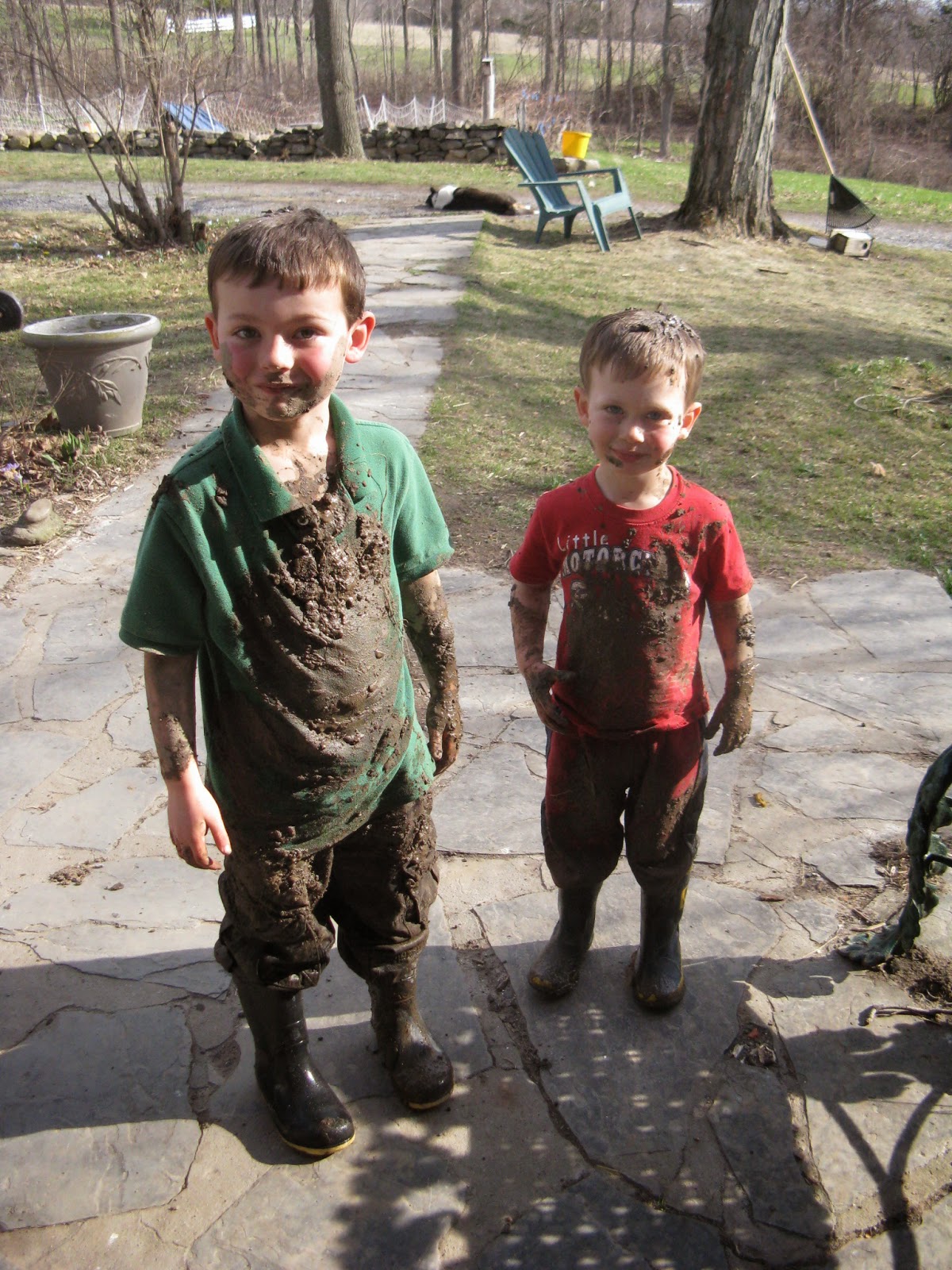 Yes, yes I do. You're the two boys who are trying to KILL THEIR MOTHER WITH THE EXCESSIVE MUD, GOOD LORD.

Back to the bucket pre-rinse.

*They weren't laughing when I made them stand still so I could hose them down outside. Sorry, kids. You want to play in the mud in April? Then you get an outside shower with fifty-degree hose water. Remember that next time you want to wallow.

Well, This Is Alarming

Last night, I went up to get some socks for Cubby and couldn't find any cotton ones. This, despite the fact that I bought ten pairs of plain white cotton socks for him not one month ago.

"What the hell did he do with all his socks?" I thought irritably, even though I knew he could not possibly have lost all ten pairs of socks in just a couple of weeks.

And then I realized where they were: In my sock drawer. And one pair was on my feet right at that moment. I had been wearing his socks for the past two weeks without even noticing.

He is five years old.

Truly, a frightening thought.
Posted by Kristin @ Going Country at 4:23 AM 2 comments: