As Good as It Gets

A. is outside with Cubby.  The MiL is in the kitchen making dinner.  Charlie is asleep on the couch beside me. I am drinking a gin and tonic in the blessed quiet of the living room.

Being a mother is challenging wherever you live.  I, for one, would never want to try to wrangle my children in a confining city apartment.  Lord, no.  But the outdoor life we live has its drawbacks too.

Due to Cubby's insistence that outside is the only acceptable environment for entertainment, I spend a lot of time outside.  Obviously.  And now I have this other child, who frequently requires milk.  Which comes from me.  So he comes outside too.  I have gotten quite adept at nursing him wherever I happen to be sitting.  This morning, because Cubby was working with a car jack in the shed*, that meant I was nursing Charlie while sitting on a hay bale in the shed.

That's bad enough, but then I saw the sheep.  On the other side of the fence.  By the neighbors' house.  And I could see one of the neighbor's cars, which meant she was home.  And THAT meant that if I did not remove said sheep from her house post-haste, I would shortly be receiving a phone call of the "please get your sheep off my property" variety.

Damn, I hate those phone calls.

A. was at court and not due home for hours.  The MiL was at work.  That left me.  Luckily, Charlie fell asleep as he was nursing, so I was able to put him in his car seat and put the seat in the shed, from whence I could hear him if he woke up.  Cubby was busily engaged shoveling mulch, so I got a bowl of chicken food (because of COURSE we were out of corn), pulled down the electric fence, and trudged up the neighbors' driveway towards the sheep.  There were only six or so milling around in the flowers.  I can only hope they didn't eat anything too important.

Shaking the bowl of chicken food worked its Pavlovian magic, and I got them over the fence and into the paddock with no trouble and went back to my children to find them both where I had left them.

Then five minutes later I had to do it again with two different sheep, at which point I discovered that the fence to the pasture was just totally open in one spot, making it no trouble for the entire flock to stroll through at their leisure.  So I tied it up in a half-assed manner with some baling twine, cursing those wretched animals all the while.

I would not be sad if the entire flock ended up on the grill.

* No, the jack was not under a car at the time.  Even we are not that permissive.  Or stupid.
Posted by Kristin @ Going Country at 10:53 AM 4 comments:

Do I Have a Treat for You

Yesterday's post--which is entirely too depressing to leave up any longer, so we're changing the subject--made me think of the phrase "riding the storm out."  Which, of course, means REO Speedwagon.  And that, of course, means another visit to YouTube to find another hilarious video featuring extremely unfortunate fashion choices.

May I present to you REO Speedwagon performing "Ridin' the Storm Out" on Burt Sugarman's Midnight Special (whatever the hell that was) in 1977.

Go watch it.  It will make your day a little more bearable and will certainly inspire laughter, if not incredulity that ANYONE would choose such a hairstyle or make such facial expressions.  (PLUS!  White sateen trousers! And what appears to be an artfully tied shawl standing in for a shirt.  Seriously.  Go look.)
Posted by Kristin @ Going Country at 11:55 AM 3 comments:

I'm sure you all remember this only partially-in-jest comment about Cubby breaking me by refusing to go to bed, reducing me to a sobbing pile of gin-sodden misery.

He refused to go to bed last night.

The first couple of escapes were dealt with relatively quietly.  As per the conventional wisdom, I brought him back to bed very calmly and told him it was time to sleep.  The third time . . . he lost it.  As soon as he saw me he collapsed on the floor, screaming he didn't want to sleep.  Attempts to bring him back to his bed and leave the room resulted in escalating hysteria.  I tried reasoning with him. ("It's dark. We sleep when it's dark.")  I tried distracting him.  ("Can you hear the crickets?  They're singing you a lullaby.  Listen to the crickets and go to sleep.")  I tried telling him a story.

When he tearfully said, "You want Mommy to stay awhile?" I did.  I stood there by his bed in the dark, answering every time he asked, "I'm right here?" with, "I'm right here.  Go to sleep."  After a few minutes, I started backing up to the door.  Every time I moved, I would hear, "I'm right here?" and would answer.  Eventually I left the room and closed the door, still answering whenever he inquired if I was there.

And there were tears seeping out of my eyes the entire time.

I finally got to bed around 10 p.m. and lay there for half an hour or so, telling myself that maybe this would be the night Charlie would sleep for four hours in a row.  Maybe the fact that Cubby didn't fall asleep until 9 p.m. would mean he would sleep until the unheard-of hour of 7 a.m.

And then Charlie was up every two hours and Cubby was jumping on our bed at 5:10 a.m.  I got up, got us all dressed, drank a lot of coffee, and reminded myself that this, too, shall pass.  I'm not broken.  Just waiting and coping.  And still hoping that tonight will be better.  Because it's all I can do.
Posted by Kristin @ Going Country at 8:16 AM 13 comments:

Labels: all about me, baby stuff, Cubby, family

My parents asked me yesterday to send them some photos that they could print out and send to older relatives who don't use computers and so have not had the opportunity to come to this here site to see photos of Charlie.

And so of course, Charlie has now come down with a nice case of baby acne.  Photogenic!

But I am nothing if not obliging, so I took a bunch of pictures yesterday and today in the hopes of getting a good one.

Here are some that I'm pretty sure will not make the cut: 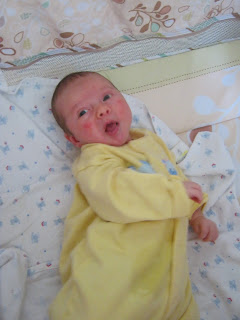 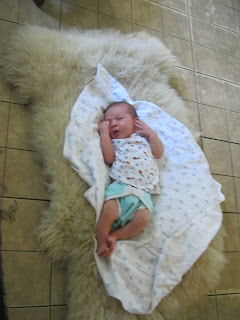 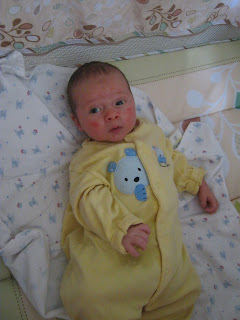 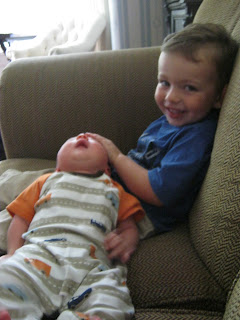 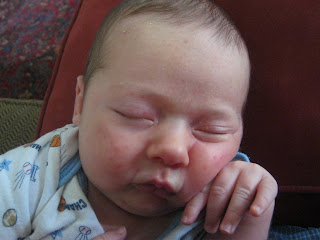 Kids are way entertaining. (When they're not making their mother wish she could plunge her entire head into a tub of water.  And leave it there until she passes out, because that would be preferable to listening to one more second of screaming.)
Posted by Kristin @ Going Country at 11:30 AM 6 comments: