I was awakened this morning at the restful hour of 5 a.m. by my own little ravenous alarm clock. He obligingly went back to sleep after his feeding, whereas I lay there stewing about all the shit that needed to get done and how there just isn't enough time to get to it all. Then I realized that fretting wasn't really getting anything done either, and since I most assuredly was not going to get back to sleep, I got up and started doing stuff*. At 5:45 this morning.

And now here we are. It's 2:30 in the afternoon and this is literally the first time I have stopped working all day. I got a lot done. There is a lot yet to do. But I felt obliged to sit down and let you all know that I haven't been attacked by a rabid woodchuck and rushed to the emergency room for shots.

You know what's really sad? That is totally something that could happen to me and nobody would even doubt the likelihood of such a story coming from me. However, the truth is much more mundane and less dramatic. I've been busy. How boring.

Oh well. It can't all be high drama all the time. Even at Blackrock.

* Stuff involving cleaning and pesto and harvesting and putting things away and OH GOD IT'S ALL SO BORING.
Posted by Kristin @ Going Country at 12:34 PM 5 comments:

A Hammock Built for Two 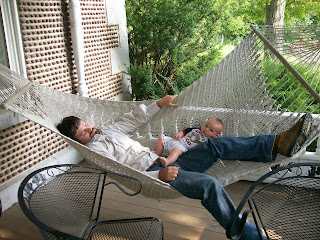 Assuming one of the two is an infant.
Have a relaxing weekend, duckies!
Posted by Kristin @ Going Country at 6:11 AM 9 comments:

I Almost Passed Out from Excitement

I know--I'm late posting this morning. That's because I blew this pop stand early this morning, leaving Cubby at the mercy of his father. And what did I do on my incredibly exciting Cubby-less adventure? WELL. Let me tell you! Because it really illustrates the glamor that is my life.

First I stopped at the MiL's sister's house to pick green beans. She left a message last week saying they were going on vacation and that we could pick their green beans while they were gone. That's the kind of message I like to find on our answering machine. Our green beans this year are sad and disappointing and nowhere near enough to provide the many beans I prefer to have in the freezer during the winter. So I stopped there to pick a HUGE BAG of beans, because GOOD LORD do they go crazy with the green beans. Thankfully.

Are you feeling the excitement? But wait! It gets better.

I continued on my way into the Small City, stopping next at the grocery store, where I wandered the vast aisles, buying such titillating items as gargantuan jugs of vinegar for pickling things and more canning jar lids. Plus a chocolate bar with toffee that I immediately ate when I got back in my car.

The excitement continues apace! I KNOW. It's getting all kinds of crazy now.

And THEN I got my eyebrows waxed, which, no joke, was probably the most exciting part of the whole trip because YIKES was I overdue for that.

Last I stopped at the gas station where I spent Cubby's college fund filling my gas tank and the gas can for the lawn tractor.

And then I came home and found Cubby asleep again, which gave me time to put everything away and share the story of my fascinating morning escapades with you.

You're welcome.
Posted by Kristin @ Going Country at 9:14 AM 9 comments:

Labels: all about me, fun with food, gardens, randomness, travelin'

The MiL has this habit of cruising Amazon and buying completely random CDs for Cubby. This is how we ended up with a CD of traditional children's songs sung by Metropolitan Opera stars (Cubby is not such a fan); the longest damned children's CD in the world with 40 annoying songs such as a hip-hop version of "Pop Goes the Weasel" (Cubby IS a fan--especially of the toot toots in "I've Been Workin' on the Railroad"); a CD of really terrible Scottish songs sung by a man in the manner of a very dramatic Broadway musical; and no less than THREE CDs of sea shanties.

Let us talk about that last one.

Do you even know what sea shanties are? I didn't either. But thanks to the information included on our copy of Blow the Man Down, I now know that they were songs pretty much used to help men work harder on ships. When they were rowing or doing something similarly rhythmic, they would all bellow songs to the beat of their drudgery. How fun.

It should surprise no one that these songs all sound as if they're being performed by a bunch of drunken men waving beer steins at a pub and swaying to the stirring sounds of "Tom's Gone to Hilo."

Hilo is a port in Peru. I know these things now.

Many of the songs are about women. Big surprise, right? And of course, we all know the sorts of women sailors sing about. They are, apparently, referred to generically as "Spanish ladies." Which seems somewhat unfair to the real ladies of Spain, but whatever. There are even a group of songs devoted to the sorts of, ahem, clinical ailments a sailor may experience after a little dalliance with one of these Spanish ladies. On the Blow the Man Down CD, the song devoted to this subject is called "The Fireship," and is a masterpiece of salty euphemisms in which the unlucky sailor enters pretty Sally's lowered gangway and then has trouble with his main mast.

I am so not kidding about this.

I'm not sure how much Cubby is getting out of these sea shanties, but there is no doubt that they have provided significant amusement for me.
Posted by Kristin @ Going Country at 7:11 AM 11 comments:

And BOY, are my arms tired!

That's what passes for a funny joke to me at 9 p.m. when I've been up to my elbows in tomatoes for two hours. And what makes it funny (in my own crazy, tomato-addled brain, anyway) is that my arms actually were tired. That's what happens when you spin a Foley food mill* for half an hour to squish all the juice out of 22 pounds of tomatoes. It's a damn good workout. A workout that results in not only firm, toned arms, but in 15 pints of tomato juice. Also a workout that results in the annihilation of a shitload of Baby Cakes tomatoes. Triple win!

I've never actually had a Bloody Mary before, but I see many in my future . . .

* While searching for an image of a Foley food mill to link to, for those of you who might not be familiar with this particular kitchen gadget, I found this entirely awesome brochure: "75 Ways to Use the Foley Food Mill." The phrase "jiffy quick time" appears in it. Also, did you know you can make liver pate by squishing chicken livers in a Foley food mill? And did you know that would most likely make me vomit? Yes.
Posted by Kristin @ Going Country at 6:10 AM 6 comments:

I'm going with not to dry.

After six hours in the oven on Saturday, the Baby Cakes tomatoes were not entirely dry, but there wasn't much left to them except skins. I think plum varieties of tomato would be more worthwhile, except if it takes the small Baby Cakes six hours in our oven to get not-quite-dry, I can't imagine how long it would take a big plum tomato. Not worth it.

Plus, I ended up with three pans encrusted with tomato bits and burned on juice. Fun dishes, right there.

I declare a Fail on the drying of tomatoes and will now move onto the next experiment: straight-up juicing. Let's hope it's more successful.
Posted by Kristin @ Going Country at 5:15 AM 4 comments:

Mother of the Year, Right Here

The MiL went camping on Friday and when she returned yesterday, she made a beeline straight for Cubby, her favorite grandchild. Also her ONLY grandchild, but let's not quibble over the details.

She came in the house and immediately snatched up the Cubby Bear, because OF COURSE she missed him terribly the whole 36 hours she was gone. Cubby has that effect on people. So he was sitting on her lap, gumming happily on her knuckle, when she realized that he wasn't just gumming. That Cubby, in fact, has a tooth. She hadn't been home ten minutes, and there she was announcing his first tooth to me. Me, his mother, the one who gets chewed on all day long and yet somehow failed to notice the sharp little point sticking out of the middle of his bottom gums.

Hi, I am very observant.

In my defense, he showed absolutely no signs of teething. None that he hasn't been showing for months now, I mean. Sure, he chews on his hands a lot and drools, but show me a baby who doesn't. As for screaming, refusing to nurse, running a fever, not sleeping . . . no. In fact, he slept better the night prior than he has in weeks. So I don't know what's up with that. Maybe he'll have a complete breakdown for all his subsequent teeth. Or maybe he'll continue with the stealth teething.

Good thing his grandmother is around to catch him at it.
Posted by Kristin @ Going Country at 6:53 AM 6 comments: