We were forecasted to get a killing frost last night.  The predicted low was supposed to be 25 degrees, so Cubby and I went out to the garden to gather up the rest of the tomatoes, such as they were.  He thought it was fantastic that he was finally given the go-ahead to actually pick the green tomatoes, after a summer of being foiled from doing just that.  But all for naught.  It never got below freezing last night, getting only to 33 degrees at the house.  There was a little bit of frost in the higher pasture, however, which Cubby thought was very exciting.

On a less positive note, we have had some more chicken attrition.  The MiL got home from work around dusk last night and found Leda (the only dog out and not tied up at the time) running frantically in front of the fence to the ram pasture, where the chicken coop is. When the MiL came in, she told A. he had better get his gun and go see what was wrong.

When he got out there, he found a hen dead in front of the coop and caught a glimpse of a fox running off.  He didn't get a shot at it, though.  The chickens were all scattered, and still were this morning, so it's hard to get an accurate count of the survivors.  A. only saw one of the three chicks this morning, though, and the MiL noted when she was prepping the dead hen for cooking that it wasn't laying, so I think what happened was the fox got in the coop and grabbed two of the chicks plus the mother hen--which were still sleeping in the nesting box on the floor of the coop-- but hopefully none of the others.

Otty was left outside last night to run free and guard the coop from that same fox, so we hope it won't come back.  Or, if it does, she'll kill it.  The dogs are the reason we don't have a lot of problems with predators, and the only reason that fox got near the chickens is because that area had been closed off from the dogs so the sheep would stay put.  Any area in which the dogs can't patrol is obviously vulnerable, however, so we'll have to make sure they can get in there more regularly.

And that concludes our country update for the day.  Over and out.
Posted by Kristin @ Going Country at 7:15 AM 3 comments:

You want to know what it's like in our house on a daily basis?  Please see this photo taken by my father for reference: 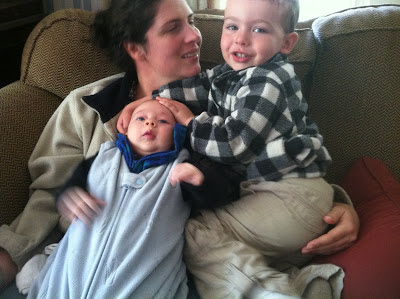 One  very tired-looking mother with a lapful of a worryingly hands-on toddler and a baby under attack?  Yup, that's about right.

Happy almost-Friday, poppets.  May your weekend be merry and bright.

I have mentioned before that I do not like to bake, and yet I now seem to have gotten myself into a situation in which I will be baking regularly.  Baking bread, that is.  But not normal bread.  Oh no.  Paleo bread.

See, A. does not eat bread.  He doesn't eat anything containing wheat flour, as a matter of fact.  He's kind of gluten-intolerant, and feels better when he's not eating a lot of grains of any kind.  So he mostly eats meat.  Lots and lots of meat.  Plus more dairy than you would think possible, and vegetables.  Grudgingly with the vegetables.

The problem with this kind of eating is that there really aren't a lot of foods he eats that are easy to prepare and eat.  There are only so many nuts and slabs of cheese a person wants to consume.  So A. misses easy foods like granola bars or bread.  And I get sick of cooking protein-based foods all the time.

Then I found the recipe for Paleo bread.  I kind of stumbled upon it when I was looking for something else, and I mentioned it to A.  I told him if he got the ingredients, I would make it.  I figured it would be gross, because most gluten-free breads are.

But damn it all if it wasn't really good.  Even though I totally forgot the baking soda the first time I made it.  Whoopsy.  That's one reason I don't bake much.  Not much of a direction-follower, I'm afraid.  But even without the baking soda, it was good*.  It tastes oddly like banana bread, despite having no bananas in it.

We ate the whole thing in one day.  Then I made a double batch, and one of the loaves was gone within two days.  Probably both would have been eaten, except I froze one to save it from the voracious hordes.  Cubby loves "Daddy's bread" too, and it's a pretty good snack for him, since it's so high in protein and low in sugar.

So now I'm going to be stuck making this stuff on a regular basis forever more.  Oh well.  At least it doesn't have to be kneaded.

P.S.  If you want to try this, I will warn you that it will stick like a sonofabitch.  The first time I made it, I baked it in a non-stick pan, and I had to hack it out in pieces it stuck so much.  The second time, I lined regular loaf pans with parchment paper and that worked much better. 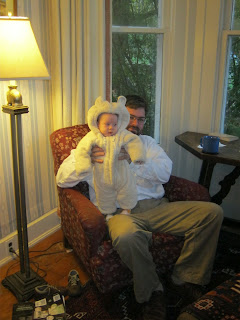 For the triumphant return of the Cubby Suit, now the Charlie Suit. Awesome.
Posted by Kristin @ Going Country at 6:44 AM 3 comments:

Were I a user of that particular aspect of social media, I could compose some pithy little tweet to tell you that A. took Cubby up to his great-grandmother's (Cubby's great that is--A.'s grandmother's) with a dinner I packed for them all, leaving me here with Charlie, who is currently sleeping.  So I'm sitting here in a quiet house next to the woodstove fire while the rain falls, eating a dinner of chef's salad and drinking a glass of wine*.

* Is it just me, or does that dinner sound like some kind of awful cliche from popular literature of What a Single Woman Eats When Alone?
Posted by Kristin @ Going Country at 3:24 PM 5 comments: