The Morning in Pictures

First, there was this: What's a guy gotta do to get some milk and a clean diaper around here, woman?
Next, there was this: 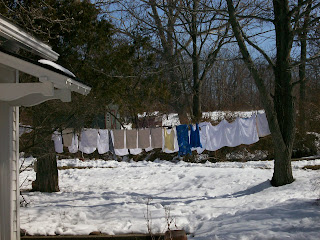 And there are all the clean diapers. Too bad they're still all wet . . .
Then, we had to do this: 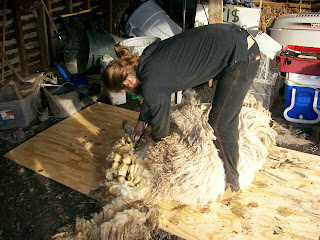 Look who's not shearing! A.! And look who's not holding the sheep for shearing and breaking her back! Me! YAY FOR PROFESSIONAL SHEARERS!
Which resulted in this: 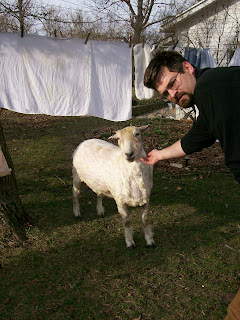 Without their fleeces, they look an awful lot like goats.
And then there was this again: 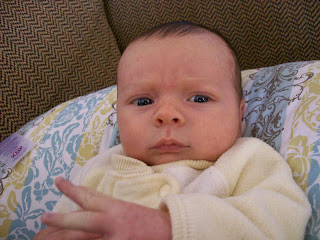 Who knows what excitement the afternoon will bring?
Posted by Kristin @ Going Country at 9:35 AM 5 comments:

In the Kitchen at Blackrock

Our kitchen is a multi-purpose room. We cook and bake in there, of course, but you just never know exactly WHAT is cooking or baking. If something is on the stove, it could be a saucepan of nasty chicken skin boiling for the dogs or a big pot of water heating to hand wash wool sweaters. And if something is in the oven, there's no guarantee that it's for human consumption. Like this, which I baked yesterday: 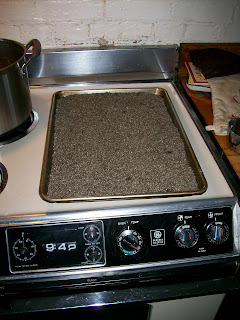 Despite the resemblance to crushed Oreos (mmm, Oreos . . .), you wouldn't want to try eating that. It's potting soil. I baked it for sterilization purposes, to make sure there are no evil cutworms in there that will spring forth and attack my fragile seedlings, as was my sad experience last year.

Now A., on the other hand, managed to produce something entirely edible yesterday. Not only edible, but delicious. He decided it was about time we had a dessert. And since he's always wanted to try Crepes Suzette, he made that.

Now, I do not know who Suzette was. But if she ate this dish with any regularity, she must have been a hefty woman. Crepes Suzette is (are? weird grammar thing there) crepes topped with a sauce made with obscene quantities of butter and sugar, plus orange juice, orange liqueur, orange rind, and brandy. It was buttery and citrusy and YUMMY. A. even did the thing where he lit the brandy on fire to burn off the alcohol. I was expecting a big dramatic flash of flame, but it was just a subdued blue flame that burned off quickly.

No matter. Despite the lack of flaming brandy, the whole thing was pretty impressive. And much more satisfying than my baked dirt.
Posted by Kristin @ Going Country at 6:09 AM 8 comments:

I am pleased to report that the ants appear to have exited stage left. We hope they do not return for a curtain call*. So I guess I can recommend the homemade ant bait. With the caveat, of course, that if you use it in a place where it could possibly be accessed by animals or small children, you should put it in a jar with a tightly screwed-on lid in which you have poked holes. That way the ants can get in, but nothing else can.

I should also mention that I used two tablespoons of borax and enough jelly and peanut butter to make a paste. That makes A LOT. Half of that would be plenty. Oh, and the jelly and borax paste? Could double as rubber cement. For real. If you're going to use a real plate (as opposed to paper or something else disposable) to put it on, like I did, put a paper towel on the plate first, or else you'll spend five minutes soaking, scrubbing, and swearing at a puddle of solidified jelly/borax glue.

I'm always enormously gratified when the homemade version of anything works. Like the laundry mucous, which turned out to actually clean our clothes better than the store detergent AND doesn't have any weird chemicals in it that I need to worry about when washing Cubby's diapers. Score.

This penchant for making do is not just because we like to be self-sufficient and clever and all, although that's nice. No, I must admit that it really comes down to the fact that we are cheap ("frugal" sounds better, but let's call a cheapskate a cheapskate, shall we?) and do not like to buy things. So if I can slaughter hundreds of ants with materials already in my home? Double bonus.

That sounded wrong, didn't it?

* Weird, inexplicable drama references, yes. Where'd they come from? No idea.
Posted by Kristin @ Going Country at 7:22 AM 6 comments:

It's Been Awhile Since We've Talked About My Dinner

Allow me to remedy that.

Happy St. Patrick's Day! Yes, there will be corned beef and cabbage on the table at Blackrock tonight, but since the same can be said of millions of households, that dinner is not unique or exciting enough to discuss here. Last night's dinner, however, was. Unique and exciting, I mean.

See, last night we had chicken Kiev, mashed potatoes, and stewed leeks. I trust you need no explanation of mashed potatoes and stewed leeks. All you need to know about those is that they are both vegetables from last year's garden. Chicken Kiev is pounded chicken breasts wrapped around matchsticks of butter and herbs, then breaded and fried. It is, essentially, a way to add lots of fat to a basically fat-free meat. Because Blackrock is most emphatically NOT a fat-free sort of house.

I'm sure that comes as a surprise to exactly no one.

The herbs in the chicken were chives and chervil. The chervil was a substitute for the suggested parsley or tarragon. And the reason the chervil was used was because both it and the chives are growing in the garden at this very moment. Which means (look! I'm finally getting around to the unique and exciting part!) that last night's dinner included both the last of last year's garden and the first of this year's garden.

I found that very pleasing, in a circle-of-life kind of way.

See? Unique and exciting, right? Told you so.
Posted by Kristin @ Going Country at 6:59 AM 5 comments:

Yesterday morning, while racing through my post-shower routine (lotion, hair, etc.), I noticed ants in the sink. Closer inspection revealed quite a few ants running up and down the shelving and around the sink. Now, ants are not anywhere NEAR as gross as, say, roaches or mice, but I still don't want them in my house. I made a mental note to ask A. if we had any ant bait around.

And then I forgot, of course.

A few hours later, I remembered the ants. I also remembered that borax is often used as an ant killer. I don't know why I knew that, but I did. We always have borax around, since it's an integral ingredient in our laundry mucous. I asked A. if he knew how to make ant bait, if the borax had to be mixed with sugar or something to make it enticing to the ants. He didn't know, so I turned, as always, to the Internet. Also known as The Font of All Knowledge.

I learned that ants, much like me, sometimes want sweets and sometimes want protein. So the borax could be mixed with a sweet thing--such as jelly, honey, or molasses--or with a protein like peanut butter. I rummaged around in the refrigerator where all the old, strangely textured jams and jellies go to die, until I found some watery grape-mulberry syrup. That went on one plate with the Borax of Death, while another plate held a delicious mixture of poison and peanut butter. Then I put both plates on the floor of the bathroom* and watched the drama unfold.

The (admittedly small and somewhat anticlimactic) drama consisted of ants swarming both plates, and then the ants disappearing entirely. The hope is that they took the poisoned goodies home to the colony, thence to poison their comrades.

Mass destruction by PB&J. Who knew such an innocent childhood treat could be turned to such nefarious purposes?

* The bathroom in which the door is always closed, which means none of the animals can get in there to eat poisoned food. An important consideration.
Posted by Kristin @ Going Country at 8:09 AM 6 comments:

Having a baby has no doubt given me a greater purpose in life/new meaning to my existence/insert your own deep significance here. But you know what else it's given me? Really awesome hair.

Okay, so it's not the baby who gave me the spectacular hair, but he is indirectly responsible. See, I have curly hair. VERY curly hair. Like, ringlets. Very curly hair does not react well to humidity. It becomes less curly and more frizzy, in the manner of Janis Joplin. But ever since we brought the baby home and the heat has been in use more frequently, the air in the house has been significantly drier. I do not generally like dry, heated rooms, as they result in dry lips and thirst. But my hair LOVED it. It looked SO GOOD. It was curly and not frizzy and YAY!

Until this morning, since it's warm enough outside that the furnace isn't running and is also very humid. And so I'm back to Janis Joplin hair. But the good hair days were nice while they lasted.

Edited to add: If you really care, you can see the ringlets in this post.
Posted by Kristin @ Going Country at 8:08 AM 6 comments:

Now that the nasty stump has been jettisoned, Cubby is allowed to have real baths. In water. Not MUCH water, but a couple of inches anyway. He had his first bath last night. In the kitchen sink. Because that seems suitably old-timey and in keeping with the vibe of Blackrock, doesn't it?

Okay, actually we did it in there because it was warm in the kitchen and we could give him his bath without having to kneel by the bathtub and strain our backs. Because we are eighty years old.

Some friends who have an older son lent us (among many, many other things*) a baby bath tub. It's just a little plastic thing that can be moved around. So we plopped it in the kitchen sink, put a little water in it, and threw in the baby. Well, not literally threw. You know what I mean. I was sure he would scream his fool head off the whole time, because Cubby, as we know, is not shy about expressing displeasure. But apparently a bath is not on his black list. He was surprisingly calm. Until we went to rinse off his head. That, he was not such a fan of. But otherwise, he seemed to kind of dig the whole thing. Which is a relief.

I took pictures, but I'm not going to post them because I wouldn't want any nekkid photos of ME roaming around online. I thought I could at least be discreet on my son's behalf.

He'll thank me for it one day.

* Anyone thinking of having a baby should first cultivate a friendship with someone who already has one. Preferably of the same sex. Hand-me-down kids' stuff is AWESOME.
Posted by Kristin @ Going Country at 8:34 AM 7 comments: