Friday Food: On the Road Again


We left Blackrock Monday and arrived home yesterday. I am so very, very tired. And overjoyed to be home again.

Long version: How many nights can we have dinner on the beach? ALL OF THEM.

Long version: Well, all nights except for this one. This was Charlie's birthday, and he had said he wanted to have dinner on the beach. But in the afternoon A. took the boys on a gully hike with his friend Jodi* and Jodi's three kids, and when they got back around 3 p.m., the children descended like locusts upon the kitchen. They ate an entire chicken the MiL had brought home from a chicken barbecue, then they ate five leftover hamburgers, then they moved on to spoonfuls of peanut butter.

Jodi and his crew didn't leave until after 6 p.m., at which point I decided it would be better to just have everyone eat their pasta with pesto--always Charlie's request for his birthday dinner--up at the house and then go down to the beach. I didn't bother cooking the pork chops that I had taken out, figuring they got enough protein in their post-hike feeding frenzy.

Long version: Last beach cookout. I cooked both the pork chops I had taken out for the day before and another package, figuring that way I would have extra to freeze for one night on our trip. The potatoes were boiled and I put them in a foil packet with butter, salt, and pepper to keep warm on the fire grate.

This was my last chance to cook the zucchini I had bought at the farmers market the day after we arrived. I found a small bag of forgotten garlic scapes and added some random grape tomatoes to the two things. It was really nice to have a cooked vegetable for once. Raw vegetables are kind of the order of the day at the beach.

Long version: We left Blackrock at 6 a.m. and stopped for the day at a Motel 6 in Englewood, Ohio, at around 6 p.m. We were planning on camping, but it was too stormy. This was a really low-end Motel 6, and the rooms didn't have microwaves. Thus, sandwiches.

We got the french fries at McDonald's. There was one just behind the motel, and we took the kids there to burn some energy in the play area. We thought it would only be polite to buy something, so we got some fries. I used to love McDonald's fries. Apparently, I no longer do. They tasted like chemicals. The children didn't have this problem and were delighted to eat the french fries.

Long version: Yes, just pork chops. We drove longer than we wanted to and once again, it was too stormy to camp. By the time we got into a hotel room at the Quality Inn in Pacific, Missouri, it was after 7 p.m. No one was particularly hungry, thanks to all the snacks I was handing out in an attempt to pacify the troops during our long drive.

I had brought up some tortillas to the room, too, but forgot the cheese and was just too tired to go back down to the car to get it. So our balanced meal began and ended with pork chops. These were the ones A. cooked on the grill the night before we left Blackrock, and they were very good.

The kids didn't care that there were only pork chops for dinner, because this hotel had a pool. The very first they've ever stayed in with such a fancy amenity. They were extremely excited.

I've said it before and I'll say it again: I encourage cultivating low standards in children. It makes it so easy to impress them.

Long version: Another desperation stop in a random place, this time at a small lake in Kansas. It wasn't technically a camping place, but camping was allowed near the graveled areas and there were some fire pits, so we called it good enough and stayed there.

The place was entirely lacking in any amenities, including a grate over the fire ring. The boys roasted their hot dogs and marshmallows on sticks, A. and I ate the leftover pork chops cold, and I made a stack of tortillas and cheese inside some aluminum foil that we propped up on a rock near the fire. The cheese got mostly melted. 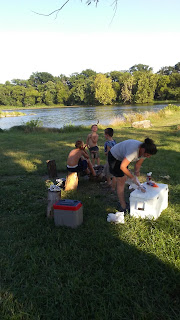 And then, because it was so hot, A. spread out all the pads and blankets and things right out in the open, eschewing tents in favor of grabbing all the breeze we could get. 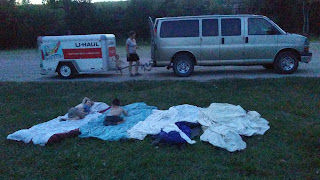 We definitely got the breeze, but it was the night after a full moon, with zero clouds. I'll allow you to guess how much sleep we all got. There were also some raccoon sightings in the night. I will not be sleeping under the stars again unless it is under extreme duress.

Long version: Because Ricky Raccoon was kind enough to wake me up at 4:30 in the morning, we were on the road by 5:15 a.m. Unfortunately, vacation food and general upheaval caught up with three of the four children and we stopped at least a dozen times for bathroom emergencies.

Due to these delicate digestive issues, we made a special stop to buy eggs before we got home. Safest food for unhappy tummies. That, and white rice. No more treats for you, kids.

Upon arriving home at 3:30 p.m., A. and I both went directly to the gardens to see what might have survived our month-long absence. Surprisingly, almost everything. Thus I was able to cut lettuce for a salad, and this made me very happy. Not that I wasn't already deliriously happy to be home again, but that was just the healthy lettuce-icing on the homecoming cake.