I See by Your Outfit that You Are a Cowboy

That day was today.

It's Career Day at Cubby and Charlie's school, and Charlie's teachers asked the kids to dress as what they want to be when they grow up. Charlie said he wants to be a cowboy.

Somehow I doubt that's a career often pursued by people in this northern outpost.

It is, however, a relatively easy outfit to come up with. Charlie already has Wrangler jeans and a plaid shirt (no pearl buttons, but good enough). I had a red bandana to tie around his neck. I even had a belt with a real buckle that shows a cowboy on a bucking bronco. The MiL bought it for Cubby when he was two, but Charlie is skinny enough that A. was able to punch another hole in it at the very end to make it fit*.

What I did not have, however, were the most iconic parts of the cowboy outfit: the hat and boots.

I didn't even try with the boots, just sending him in his winter boots and telling myself he's a northern cowboy.

I briefly considered taking advantage of Amazon's two-day shipping and actually buying a hat, but that seemed like a waste of money. So I found a YouTube tutorial on how to make a cowboy hat with paper.

I did actually manage to make a hat, though it doesn't look quite like the one that guy made. Or, um, at all. For one thing, my cutting was a little, ahem, rougher than his, because instead of using an Exacto knife to carefully cut little triangles, I just quickly snipped around to make the little sticky-out things on the crown part that I taped onto the brim part, so you could see where I had cut.

I figured I could just tape on another piece of paper all around the hat to hide it. I gave this piece to Charlie to decorate with crayons. He decided a cowboy would have red lollipops on his hat and proceeded to decorate accordingly.

Sure. It's a Willy Wonka cowboy hat, I guess.

Also, I only had letter-sized paper, which made a hat that was not at all big enough for Charlie's head, so he can't actually really wear it. I told him real cowboys never wear their hats indoors, anyway, so he could just hold it when he was at school.

I also told him that he was getting a cowboy omelet for breakfast, because cowboys love cheese omelets with salsa. He totally bought it. And then, when I offered him an orange, he asked if cowboys eat oranges.

Yes. And I bet they all make their beds and pick up without being asked, and never, ever punch their younger brothers**.

I should milk this one for all it's worth, right?

Anyway. Ridiculously small hat aside, the outfit ended up being pretty good. He was happy with it, in any case. 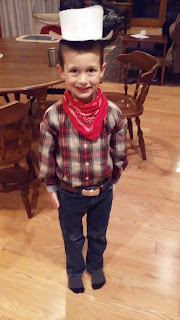 * He stabbed himself in the process and bled a little on the belt, but I told Charlie that would just make it more authentic-looking.

** Ha. I actually knew a few cowboys when I worked at a dude ranch in Colorado during the summer in college, and they are very likely to be messy and prone to fistfights. They did all eat salsa, though.

When we were at Blackrock for Thanksgiving, A. went hunting and shot a small doe. He hung it in the shed while we were there, but when it came time to go home . . . 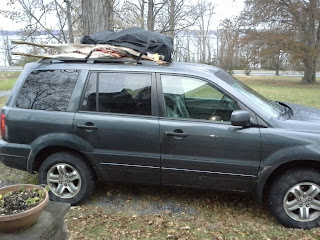 Yeah. This is literally how we roll.

I kept forgetting we had a dead, gutted deer on top of our car, though I definitely remembered when we were in the big village closest to home and I saw a lady in the car next to us take a picture of it.

"I think someone just took a picture of our car," I said to A. incredulously.

"Great," he said. "We're going to be on someone's Instagram. I hope she got the four kids and enormous dog inside the car, too."

I guess it's nice to provide the local color for visitors to the north.

Then again, I was sorely tempted to take a picture myself of local color yesterday when I took Poppy to the pediatrician for a check-up and walked into the office's entry to be confronted with a big pile of firewood.

The kids' pediatrician has his office on the ground floor of an enormous old house, and lives on the top floor. Gotta have that firewood handy. It gets cold 'round these parts.

It's all about survival in the frozen north. Firewood and dead deer included.