Cubby and Charlie spent some time this morning running around looking out of windows at the spectacular drifts of snow and whining about not being allowed outside.

It was 15 below zero with a windchill of 40 below zero. No, children, you may not go outside. I try to be at least a little bit of a responsible parent, you see.

I did promise them, however, that they could go out when the wind and temperature had moderated a bit.

At noon, when Jack was down for his nap, I looked at the weather station and saw that it was nine below zero with a windchill of 25 below zero.

Seems moderate to me! Out you go, kids!

I sent them to the mailbox to get the mail, which accomplished three things:

2) It saved me from having to go out there to check the mail, and

3) It meant I now have two new DVDs of DuckTales for them to watch later, because the mail included our next Netflix delivery.

I only let them stay out for eight minutes, because of the very real danger of frostbite, but at least they got out to climb 10-foot drifts for a little while. I'm pretty sure those drifts won't be melting anytime soon, which means lots more outdoor fun in the future. When the weather is bit less life-threatening, that is.

Cubby came in grinning and exclaiming, "That was GREAT! This is the best day of my life!" And Charlie, not to be outdone, proclaimed that it felt as warm as summer outside.

This Moment by the Numbers

Current indoor temperature: 67 degrees above zero, because of . . .

Current household members sleeping: 3 (Jack, Poppy, and A., who is sick)

Current number of marshmallows in the cups: 6

Labels: all about me, family, the great white north, weather

An Update, a Photo, and a Confession


Update: The furnace is currently working. Hooray! But not because the repair guy (who didn't show up until 7 p.m. yesterday) found anything really wrong with it. There was a little ice in the intake pipe and he pointed out a dirty air filter that we can change. Other than that, and filling the tank to create more pressure, there was nothing for him to do. It started working when the temperature got above zero. So we have to just cross our fingers that those small things will be enough and it won't stop working again when it gets to 25 below zero this Friday.

Also, no one else has gotten the stomach bug yet, so we are currently--and mercifully--vomit free. I'll give the credit to the pork.

And now, a photo: 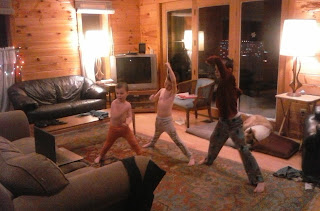 Three boys, two shirtless, and all practicing karate in the living room? Welcome to my life.

That was taken during the Christmas Break That Will Live In Infamy. I had the brilliant idea of finding a karate lesson for kids on YouTube in a desperate attempt at distraction. It worked for a few minutes, before Charlie declared it was boring and he wanted one with more action. Meaning I think he wanted to watch more Bruce Lee. Hence the lack of shirt. I believe when this photo was taken, they were learning to block. Cubby was really into it. Too bad there are no martial arts classes around here.

And finally, a confession: We were running very low on milk yesterday. A. was planning on going to the village to pick up his mail and get some milk, but then it started to snow quite heavily and unexpectedly. He didn't want to drive if he didn't have to, so he didn't go. I took stock of the amount of milk left (about a pint), calculated how much I would need for my coffee in the morning . . . and gave the kids water with their dinner.

Yes, I totally hoarded milk from my children. Their bone development isn't going to suffer because of one afternoon without calcium. Without milk, there can be no cafe au lait. And without Mommy's cafe au lait, there is no joy in the world.


Short version: Our furnace stopped working consistently yesterday, and it got to 15 degrees below zero last night.

Thankfully, there's a propane stove downstairs that will actually heat the whole house to relatively comfortable temperatures, but it was colder upstairs than downstairs, so A. and I slept on the fold-out bed in the downstairs room where the fire is. We put Poppy's bassinet right next to the fire. The other kids all sleep downstairs and we left their doors open so they could get enough heat.

This all would have been fine and dandy (sort of), except for the fact that Poppy was crying and fussy and keeping everyone awake. Also, she kept throwing up. She spits up quite a bit anyway, but this was straight-up throwing up everything she was eating. She was obviously sick.

Jack had been complaining all evening of a tummy ache, so I was expecting something dire in the near future.

Sure enough, Jack woke up at 11:15 p.m. while I was trying to comfort a crying Poppy and promptly threw up in his bed. A. changed his sheets and pajamas and put him back to bed. I gave up on being in the warm room downstairs and brought Poppy upstairs* to stay in the bed with me in the hopes that everyone else might be able to sleep.

It was a New Year's Eve that will live on in our memories, to say the least.

A service guy is coming out today to look at the furnace, and we're crossing our fingers that he can actually fix it.

After some Internet research, A. is afraid the problem is simply that propane doesn't work properly in the temperatures we've been getting. He's getting his kerosene heater in working order as a back-up heat source, because it's supposed to get to 27 degrees below zero on Friday.

Now we'll just hope that our New Year's Day pork, greens, and black-eyed peas bring us our health, wealth, and happiness sooner rather than later. In the form of a working furnace and no more vomiting children.

Happy New Year, my lovelies. Cross your fingers for us.

* It was 62 degrees upstairs, so it's not as if it was life-threatening up there. It's just that she had to be next to me in the bed to be warm enough to sleep, which means I don't really sleep. But at least five of the six people in the house were sleeping.