When A. first said he would dig a well in the pasture--by hand, with a shovel--so he could set up a gravity-flow pipe to fill the cisterns? YOU CRAZY.

Once he had dug the well and it was filling the cistern? AWESOME.

When A. said he would build a greenhouse for the tomatoes out of trees? YOU CRAZY.

Once he had built the greenhouse and we had ripe tomatoes for months? AWESOME.

Of course, the crucial middle step to going from crazy to awesome is successfully completing whatever plan everyone thinks is crazy to start with. Otherwise you just stay crazy, I guess.

I think our move to New Mexico is going to fall into this category.

I'm pretty sure when we announced to family, friends, and the world at large that we were going to pack up our children and our lives and move to a tiny village in the middle of nowhere New Mexico that only A. has been to, and that only a couple of times, the general (though unvoiced) reaction was, "YOU CRAZY."

Possibly. But once we've done it, once we've made the move and settled in, and have our little family in our little village within driving distance of cousins and out of the punishing northeastern winters? Well. Then it will be awesome.

We just have to get from here to there, starting with our road trip commencing tomorrow*.

* I can hope the road trip will be part of the awesomeness, but I'm afraid it will fall squarely in the crazy category. Wish me luck, and lots of it.

Labels: all about me, country wisdom, moving, the A team, travelin'

The Saddest Farewell to the Best Dog

My baby dog Mia has died. She was 12 years old, and not in good health: kidney failure, severe arthritis, early stages of senility . . .

But we're all still very sad. 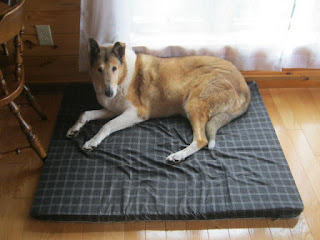 Goodbye, old friend. You will be missed.

Friday Food: Still in the Kitchen at Blackrock

Long version: These were real pork ribs, not those slabs of pork shoulder masquerading as ribs. We had been planning on cooking on the beach, but it was too windy. So I seasoned the ribs, cooked them covered in the oven for a couple of hours at 300 degrees, and then A. made a wood fire in the kettle grill to grill them quickly until they were crispy. They were very good.

So were the boiled potatoes and green beans. A basic meal, but satisfying.

Long version: The MiL had a low-key going-away party for us with various family and friends. She made the largest pork roast in history. I'm pretty sure she had a party just to get that monster out of the freezer.

So there was sliced pork, rolls to make sandwiches, many whole heads of roasted newly dug garlic that were delicious, Grandma Brown's Baked Beans, green beans, cucumbers, chips and salsa, and corn on the cob.

I chose Oreos, because I'm a kid at heart when it comes to cookies.

Long version: I used the leftover pork and roasted garlic to make carnitas, which were then served in corn tortillas with lettuce, lime, finely diced onion, salsa, and sour cream.

I feel like I was deprived in the first three decades of my life not knowing how much better leftover meat is when fried in fresh fat. So much better.

Long version: Does this meal just scream "SUMMER!" to you? If it doesn't, you must not live in the northeast.

I had the kids shuck the corn for me. And then they all ate one ear of corn raw, because who can resist the allure of raw corn on the cob? I cut the corn off the rest of the ears straight into the skillet I was going to cook them in. It's better to use the bundt pan, but I was trying to avoid making another dish to be washed.

So I just cut the kernels right off into the cast iron skillet, then added some butter and salt and cooked it all slowly until the corn was done. I much prefer corn this way. I always feel the butter is wasted on corn on the cob, because most of it drips right off.

Oh, and there was more corn. There was a LOT of corn. Even more corn than garlic.

Long version: I rushed in the door at 5:10 p.m. (boring errands), dumped some spices on the pork chops, and threw them under the broiler. When they were halfway done, I put the leftover potatoes in the half-empty pan with the pork to heat up and get a little crispy.

I had washed the lettuce and made a vinaigrette earlier in the day, so all I had to do for the salad was tear the lettuce up and add a sliced cucumber.

Corn in the microwave (finally, the last of the corn), and there we have dinner.

Incidentally, I feel very lucky that I don't have to come home from work after 5 p.m. every day and get dinner on the table. Everyone was very, very grumpy when we sat down to eat at the shockingly late hour of 5:45 p.m.

To all of you working people who make dinner for your family when you get home after a long day: I salute you. And do not envy you.

Long version: Part of my road trip food prep was making some hamburgers and a lot of taco meat. A LOT. I think I had around eight pounds of ground beef thawed. I used a couple of pounds to make eight hamburgers, which I froze. The remainder was used to make a giant pot of taco meat. This pot, actually, which was so full I could barely stir it.

We ate some of the meat in corn tortillas, and then I froze the rest for the trip.

The cucumbers were the ultimate grudging vegetable. An unpeeled cucumber cut into spears and thrown on the plates. There. There's your vegetable.

It was really hot in the kitchen after all the frying and simmering. I was over it.

Ice cream on the porch after dinner during a cooling downpour helped, though. 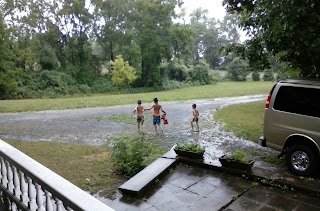 Followed by some playing in the rain. 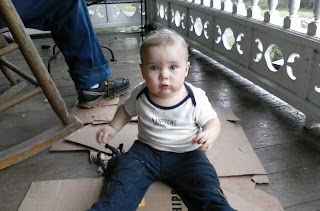 Meanwhile, back on the porch, this one wallowed on the filthy porch floor and tried to eat bits of grass and rocks. To each her own.

Today's PSA: The chocolate sauce from the frozen banana recipe is even better spooned right over ice cream. It's like that Hershey's shell product you can buy, but no weird ingredients. Half a cup of chocolate chips and one tablespoon of coconut oil is just enough for all of us to have some.

Long version: A. spent the day chainsawing and clearing brush. When he was ready to quit at 3:30 p.m., he wanted to go down to the lake to wash off in the water. So we all went down and then, as it was already almost time to start dinner and I had taken easy-to-grill sausage out of the freezer, I just added the other things to make a beach cookout dinner.

Let the record show that I have been FUN this summer, dammit. (Also sweaty and grouchy and stressed out sometimes, but I tried to be fun, anyway.)


I made a card for A. this morning that reads thusly:

Labels: all about me, the A team

Whistling in the Dark


Or perhaps more appropriately "listing in the chaos."

I am not a list maker. Maybe I fear the failure of not checking everything off of a list. Maybe I feel making a list is more work on top of the work listed. Maybe I just never got into the habit. Whatever the reason, I do not make lists.

I am currently facing down the second portion of our move. We will be loading a U-Haul trailer with our remaining worldly goods on Saturday and starting our drive to New Mexico early Sunday morning. There are many, many things that need to be done between now and then.

And so, of course, I'm focusing on food. You expect anything else from me?

With six people--four of them small children--on a multi-day car trip, there are not going to be many restaurant stops. It would be too expensive, too stressful with all the children, and would delay us too much. Thus, I'm planning on pretty much feeding us all breakfast, lunch, dinner, and snacks out of coolers and microwaves at motels.

So I've made lists.

A list of meals and snacks for each of the five days we think it will take us to get there.

A list of the foods needed for those meals and snacks.

A list of the foods I still need to buy.

A list of the foods I can prepare and freeze ahead of time.

A list of foods to be prepared and put in the coolers.

A list of the non-food items needed for feeding everyone.

That's a lot of lists.

But if all goes as planned, we'll make it from New York to New Mexico without having to get in and out of a restaurant, unless we really want to.

And if all doesn't go as planned? Well, it can't be my fault, can it? I mean, I made lists.