For Purposes of Comparison

After sorting the many, many bags and bins of small boys' clothing we have accumulated--and discovering that WOW we have WAY more infant socks than anyone really needs, especially as they're an essentially useless item--I washed the smallest stuff in preparation for the coming small person.  In the load of 3-6 month size clothing, I threw in Cubby's current pajama bottoms as well.  As I was folding the clothes in preparation for putting them away, I was struck by the size difference in the pants Cubby wore when he was three months old and the pants he wears now. 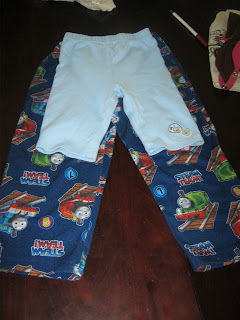 Also struck again by the irritating reality that it is virtually impossible to buy pajamas for a toddler that are not obnoxiously emblazoned with some copyrighted cartoon character.

The big boy who wears those lurid pajama bottoms was also adamant that he must go outside this morning, despite the fact that it was POURING rain.  Luckily, his father was already outside, so I put Cubby in his rain jacket with the hood, shoved his feet into rubber boots, and sent him out.  Ten minutes later, I went outside to find this. 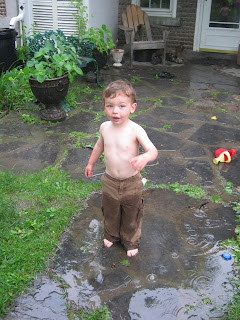 So much for dressing appropriately for the weather.

A. informed me that Cubby wanted to "swim" in the "creek" on the driveway.  Meaning he wanted to lie face down in the torrents of water flowing down the driveway.  This is what he does when he goes in the gully, and he was very excited to find that the creek had come to him.  So A., obliging father that he is, stripped him down to his pants, and allowed the kid to wallow in the mud for awhile.

Cubby also sampled some of the flowing water.  Meaning he put his face in it and drank it.  Gross.  When asked how it tasted, he said, "Muddy."  Yeah, I bet.

Possibly I Shouldn't Admit To This

But you know, it's just so representative of my life, I feel I must.

I'm sure you all remember that Cubby has recently been relocated to a new bedroom?  Well, this relocation meant that I now had access to the Secret Stair again.  The Secret Stair leads from the library to Cubby's old bedroom*, and so it was locked shut from the inside of the bedroom to keep Cubby from attempting the steep steps unbeknownst to us, and then blockaded from the bottom so the Devil Cat wouldn't work the non-latching door open and prowl around outside Cubby's door while said child was trying to sleep.

There are a lot of mischievous creatures at Blackrock.

That meant that the Secret Stair had not been looked in lo these many months.  I was pretty sure there were some bottles and things in there that I might need for the new baby, plus I was VERY sure it could use some cleaning, so I braced myself, opened the door, and started sorting all the junk that had accumulated in there before it got closed off.

I found, in addition to many random papers, books, and magazines, the sandals I was looking for just yesterday, a pair of wool pants that A. had been asking about a long time ago, and three butternut squashes.  Which had been in there since, uh, October.  And yet, miraculously, were not rotted into mush.  In fact, they look perfect.  I haven't cut them open yet, but I must say I'm impressed with their longevity.

Then I made my way to the landing at the top, outside the bedroom door.  When A. was putting insulation in the attic this winter, he dropped down the plastic wrappers from the insulation through the attic trap door that opens into the Secret Stair.  I hadn't known that plastic was up there, so I went to get a big garbage bag to throw it out.  As I was gathering it up and pulling it off the landing, I heard something fall to the bottom of the steps.  I figured it was a work glove or something.

Then I saw the small piece of skull on the landing.

And then I looked down at the base of the steps, where I saw the most mummified, horrifying squirrel carcass I have ever had the misfortune to come across.

Except I didn't know it was a squirrel until I called A. down to identify it for me and he told me he had found it in the attic--already dessicated-- and thrown it down the trap door in preparation for disposing of it, then accidentally covered it with the plastic and forgot about it.

OH MY GOD, THAT IS SO GROSS.

I mean, it wasn't rotting and smelly or anything, but still.  Mummified squirrels falling from on high are no one's idea of a good time.

A. took it away. Along with the plastic, which I refused to have anything more to do with on the grounds that I had no confidence it wasn't concealing more horrors.  I finished my cleaning with trepidation, but didn't encounter anything worse than cobwebs after that.

I knew I was avoiding that staircase for a reason.

* Does this make anyone else think of  the game "Clue"?  It was Miss Scarlet in the library with the pipe wrench!  And she escaped via the Secret Stair.
Posted by Kristin @ Going Country at 4:31 PM 5 comments:

I Just Love These Unexpected Breaks

Remember when A. took Cubby to see the pile driver in the lake, giving me a glorious and totally unplanned 45 minutes in which to do whatever I wanted?  Okay, so I ended up just eating some breakfast and writing an extremely short post, but whatever.  I was doing it sans Cubby.

Well, today at about 4 p.m. A.'s friend Jason called to let us know he was at our beach and on his way up with some more trout for us.  He dropped off the fish. I gave him one of my extra tomato seedlings and invited him to dinner.  He asked if A. wanted to go out in the boat with him to fish on his way back to his truck where he would get his boat out of the lake. A. asked if Cubby could go too. Jason said sure.  And . . . here I am alone.

Dinner's ready.  It's not quite 5:30 p.m.  I don't suppose they'll be gone much longer, but this time I got a whole hour and a half in which to make dinner and waste time online.

I am all for male bonding if it means an empty house.
Posted by Kristin @ Going Country at 3:30 PM 4 comments:

Labels: all about me, Cubby, friends, the A team

The Fun We Have Around Here, You Have No Idea

Cubby, as you may have gathered by now, does not appreciate significant amounts of indoor time.  It results in a specific shriek of a pitch and decibel level that I particularly abhor.

Luckily, we received in the mail today a package of newborn-size cloth diapers as a gift.  So several precious shriek-free minutes were devoted to an absolutely hilarious game of, "Does Beaver have a poopy diaper?" 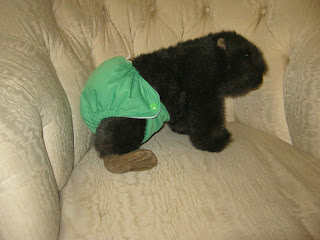 He never did, in case you were wondering.  Those beavers have impressive bowel control.

As entertainment goes, it's a long way from a good book, but it sure beats the hell out of the shrieking.
Posted by Kristin @ Going Country at 5:41 PM 4 comments:

I mention this a lot, I think, but it's worth noting again how much stuff we have in our house.  You know how when you move, you end up with piles and piles of things to throw or give away?  Lamps, books, kitchen tools,  furniture . . . yeah, nobody ever moves here.  We've actually cleared out quite a bit of extraneous stuff in the last several years, but still.  There's a lot more.

This is why when it came time to convert the former nursery where my brother-in-law slept when we moved in (that then was converted into a study for me when he moved out) into what is now Cubby's room, there was a lot of furniture to be shifted.  In that room were four full bookcases, a desk full of papers, a table, and all the bits and pieces of things that no one could find a place for and so got shoved in there because I kind of stopped using it as a study when I got a laptop and could sit by the woodstove in the winter with my computer rather than shivering upstairs on a desktop.

The bookcases were going in the far back bedroom.  There was a bed in there that needed to be removed and put in the barn.  But to get to that back bedroom we had to clear out the back hallway, which was blocked by a bed waiting to be put in A.'s childhood bedroom back there.  But first we had to get the bed that was already in that bedroom downstairs, into the truck, and over to A.'s aunt's house, where she could use it.

It was like a game of Jenga.  Move this piece first or the whole thing will come tumbling down.

Also, Cubby needed a dresser, thanks to our complete lack of closets.  So I stole the one that's been sitting in the upstairs hall for about twenty years.  It, too, was full of an accumulation of clothing, old papers, photographs, and all the other miscellany that collect in random storage drawers.  The MiL had to do a lot of that sorting.

In sum, to get Cubby into his new room with a bed, a dresser, a chair, and a bookcase, we had to move four full bookcases, four beds (plus the crib that had been stored in the study), a dresser, a table, and a desk.  This is not something I would recommend undertaking when eight months pregnant, by the way.

But!  It all got done.  And the benefit of having this ridiculous excess of household items is that we didn't have to buy anything for Cubby's room.  We had the bed; I found a dresser; there was a chair already in there; I selected two rugs from our stash of about a dozen extra ones that are hanging out in the crawlspace; A. found some posters of fish and animal tracks; and there it was.  A fully furnished little boy's room.

Wait.  I did buy one thing.   A really good window blind to block the light so Cubby would sleep. Which he did, for his nap yesterday and last night with no issues whatsoever.

It occurs to me that I have reached the point where a prolonged absence here might make you think I am bringing forth new life.  So I'm just checking in to let you know that no, there is no baby yet.  Except for the one still inside of me, that is.  Still awkwardly pregnant, still trying to figure out where the hell we stashed the infant car seat.

Also, moving lots of furniture and sorting through mountains of accumulated paperwork and books to clear out the room that will be Cubby's starting today.  Wish us luck with that transition.