Long version: Now that it's no longer an option for me to get the gluten-free corn pasta that I bought in New York, I don't bother with any kind of gluten-free pasta. So if I'm making something for everyone that normally calls for pasta, I make it with rice instead. Thus, tuna-noodle casserole without the noodles.

I forgot to put in mayonnaise, and the rice absorbed most of the sauce and was a little dry, but otherwise, this was fine.

Long version: Right to the most exciting part. This is the salad I made with arugula, lettuce, and green garlic: 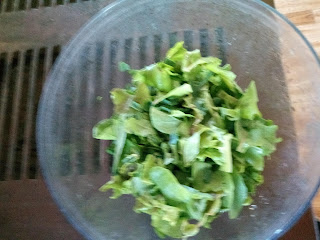 It was superb, and I look forward to many more to come. Note to self: Plant more lettuce seeds.

We're almost out of ground beef (or any beef) from last year's cow, but the school Sysco program is offering five-pound chubs (grossest word ever) of ground beef so I got one of those. Or rather, I got a box of those, which is actually twenty pounds of meat.

Unfortunately, the difference in quality is only too apparent. It's disturbingly pale, soft, and just not as tasty as real beef. Still, it's nice to have the option.

Long version: I stole some sourdough starter from the bread I was making to make pizzas, which this time were one with diced leftover Italian sausage, and one with half sausage and anchovy paste and half olive and onion.

When A. was in Tucson  over Thanksgiving, he was walking with the kids in my FiL's neighborhood when he came upon an olive tree that was dropping its fruit right on the sidewalk. He asked the kid playing in the yard of the olive tree's house if he might pick up some of the fruit. The kid told him they were poisonous, but the kid's mother told A. he could take some. She obviously thought A. was crazy, so he just gathered up a few handfuls and left.

He brought these home, and I brined them. All I did was put them right in a jar with layers of pickling salt and shake the jar every few days to distribute the salt. After a few weeks, there were edible olives.

They were still a bit bitter, but still at least as good as the ones from an olive bar at a store.

Unfortunately, the olives I used for the pizza were the last in the jar, and they were WAAAAY too salty, even after being rinsed. Should have soaked them for awhile, I guess.

Oh, and I also put some basil on the pizzas from the plants growing away in the kitchen. I still have a dozen plants even after giving a few away, so I hope to have LOTS of pesto this year.

Dessert was really Rice Krispie Treats, but since I use Malt o Meal crispy rice, I think I can't actually call them that. This is the recipe I use, anyway. It has more butter and marshmallow in proportion to the cereal, and thus, is of course better.

A. went with Jack north of here to get some hay this day, and they visited the camels that randomly live on a ranch somewhere near the hay place. 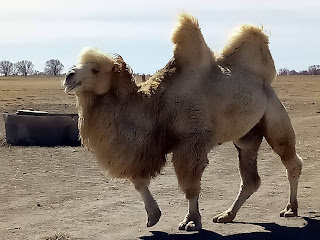 I can't help but think that Bactrian camels look like a cruel joke on the part of nature.

Long version: Last time I made stir-fry about two weeks ago, I prudently trimmed all the meat, mixed it all with the stir-fry marinade and then froze the extra meat in a couple of Ziploc bags.

After a crazy day in which I was on and off computer meetings--for the boys' school and my own work--from 8 a.m. until 4 p.m., I decided something easy was the best idea. Frozen stir-fry elk pieces to the rescue! Also half a bag of frozen stir-fry vegetables, half a bag of frozen peas, and the last small bag of cabbage I froze from our cabbages before we left for Blackrock last summer.

Short version: A triumphant casserole, another salad of MY LETTUCE HOORAY!

Long version: The casserole was a triumph of re-combination. First there was a layer of salsa, then a layer of leftover mutton taco meat and some leftover re-fried beans made with canned black beans Rafael gave us, then another bit of salsa, then a layer of grated cheese, then a layer with the remainder of three bags of ripped and wet (this happened somehow in transit to the tiny village store, so the owner gave them to us for free) corn tortillas fried in corn oil, then more cheese. Baked, and it was really good.

I also win salad, which was another of the lettuce/arugula/green garlic from outside our very door. I'm so happy salad season is here again.

Long version: I think I shouldn't really call the meat from a wether "mutton." That implies very strongly flavored meat, and this really isn't. So even though it was definitely a mature sheep, we'll call it lamb.

All I did was trim a roast, cut it into thin slices, and fry it with salt, pepper, garlic powder, and paprika. It was good.

Photo break! This children are digging a goldfish pond in the pasture. A. marked it out and told them if they could get it big enough and deep enough, he would build a wall around it, line it, and put some goldfish in it. 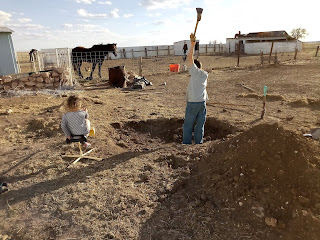 I think they're actually going to do it. And then we'll add goldfish to our crazy menagerie.

Long version: This time I cooked one of the chunks of pork butt in the oven until it was tender, shredded it, and fried it with salt, pepper, garlic powder, and paprika. It, too, was good.

This was the last of the frozen green beans. Except for the 24 pounds I picked up this same day from the school's Sysco order.

A Plea for Sourdough Sanity


When the MiL was here last month, she watched me make sourdough bread and remarked, "It's amazing how you don't take any particular care shaping your bread, and yet it's so good."

The story of my life. I don't take particular care, and yet it turns out pretty good.

As everyone has no doubt seen, this current situation in which yeast is apparently as rare and valuable as caviar has resulted in an incredible number of people trying sourdough for the first time. Or trying it again. And what I keep seeing over and over are frustrated comments about how to do this.

When do I feed it? How much? How often?

What do I do with the discard?

How do I shape it? What do I bake it on?

There are sourdough hydration calculators online! I am not kidding!

This is insanity. I wish people would calm down and not make it so complicated.

When I was having trouble getting my starter, uh, started again after our trip to New York, I tried troubleshooting with sites dedicated to sourdough and I quickly lost patience. If I were trying to start baking with sourdough using those sites, I would give up immediately.

I want to tell you all a secret: I don't do any of that stuff. I don't even know how.

I don't feed my starter. I keep it in the refrigerator, scrape it all out to start a new batch of bread every ten days or so, and then, before the third addition of flour, add some dough back to the jar in the refrigerator to serve as starter for the next time.

I don't worry about baking with discards. Because I don't feed my starter.

I bake it in regular bread loaf pans greased with butter.

And what this produces is four loaves of sandwich bread a week for my family. Which is all anyone wants, really, at this time.

You do not need artisanal sourdough loaves if you are trying to make PB&J for four kids. You just need bread. And not bread with an almost-black crust that resists a bread knife, or all those big holes that sourdough people get all excited about. That looks pretty, but doesn't make a good sandwich for kids.

Maybe all those tips and tricks (and calculators, good Lord) result in slightly higher rise or airiness or whatever, but do you need that? I don't.

Sourdough will give you very good bread, with very little effort. I'm not a natural baker. I don't even LIKE baking much. But even I can bake with sourdough.

And I don't use a hydration calculator.

The Seeds of Revolution


Cubby has created a country within our household. Sort of like Vatican City in Rome. This country is called Goth, and it has four residents. I bet you can guess who they are.

Poppy is the Queen of Goth. Cubby is the commander general and de facto ruler, despite Poppy's honorary title.

Their currency consists of "smacks" and "half-smacks," (despite the name, actually pieces of paper, not physical blows) which can be used to buy such necessary items as a tube of lip balm without its cap and pencils. Cubby is also the Secretary of the Treasury.

The country's borders are the driveway, barn, and fence on the south side of their enemy country of Mom's Dictatorship (I made that name up myself).

Their aim? To go to war with Mom and Dad and win greater independence.

This is their military command unit, set up in the heart of enemy territory. 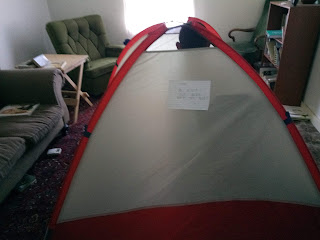 Inside, Goth's military strategist is hard at work. 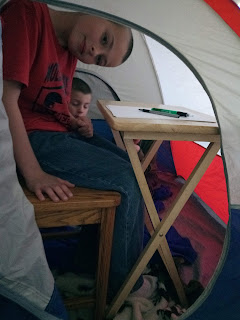 They thought I was just taking a picture to show Nana and Baca. Little did they know it was a not-so-covert spy mission.

Shortly after that picture was taken, Cubby came into the kitchen requesting "provisions" for the beleaguered troops. So I guess they need to work on their supply trains.

Will the plucky but ill-equipped rebels succeed? Or will they be ruthlessly quashed by the might of the Mom Dictatorship?

What do you think?