Today A. and I are celebrating the tenth anniversary of our blessed nuptials. Have you ever looked at the list of traditional anniversary gifts by year? It's hilarious. My favorite might be Year Nine: Pottery/Willow.

Say what? Willow? I guess last year for our ninth wedding anniversary I could have gotten A. a willow basket or something. (Ooo! Or the movie! There's a blast from our 1980s past.) And had I bothered to consult the list this year, I would have gotten him something appropriately made of tin or aluminum.

Instead I got him hamburger patties.

A. eats a lot of meat. No, a LOT of meat. No, more meat than you're thinking a person who eats a lot of meat eats. A LOTLOTLOT. It's kind of hard to keep up with. Especially for lunch, when most people eat a sandwich or leftovers*, A. wanders into the kitchen with a forlorn look on his face, as if a sirloin steak might appear if he wishes hard enough.

He has, in the past, purchased a great quantity of ground beef, which he then formed into very thin hamburgers and froze individually, later to be fried in a pan still frozen for a somewhat-convenient and still meat-based lunch.

He hasn't done that in awhile, though. And he's commented on this sad fact several times recently.

So I bought him some pre-made frozen hamburger patties for our anniversary. Because it's our tenth anniversary, I bought him ten pounds of them. And because I love him, I didn't buy them at Wal-Mart or something. Instead I made a special trip to the farm up the road that raises Scottish Highland cattle and sells their meat. Oh, those Highland cattle: So cute and so tasty.

We'll probably eat some of them tonight for our special anniversary dinner. Which I will cook and which will be at five p.m. with two spastic children in attendance. Because that's married life after ten years and two kids.

Happy anniversary to my husband of ten years. He's a keeper. 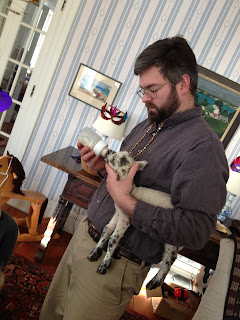 Do you know of any other men who bottle-feed lambs in the living room while sporting plastic bling**? Didn't think so.

** This photo is from Cubby's Mardi Gras birthday party, thus the necklace.
Posted by Kristin @ Going Country at 3:00 AM 6 comments:

Having a second child means getting to experience a lot of things all over again. There are the good things that I'm delighted to get to experience again (first smile, learning to clap, utter delight at successfully taking a step) and then there are the things where I'm all, "Oh God, this again."

Except in Charlie's case, it was his emerging teeth that prevented him from sleeping, not whatever mysterious thing kept Cubby awake for a couple of mornings when he was around a year old. Whatever the cause, the end result is the same: Seriously pissed-off baby and a weary mother.

He's asleep now, though. Sweet relief for all.
Posted by Kristin @ Going Country at 9:51 AM 2 comments:

We eat a lot of fish. Well, maybe not as much as some people who buy salmon fillets every week at the grocery store or whatever, but a lot more than we would if we weren't friendly with the world's most fanatic fisherman.

Mr. Jason provided us with a couple of large lake trout last night that A. filleted and presented to me. We had them for dinner. And I made my fall-back, no time to cook because the children are screaming (teething and lack of sleep) sauce to go with it. I will now share that sauce with you, should you find yourself in possession of a mild white fish that needs some livening up.

I almost wrote "jazzing up" there, but then I realized that sounds incredibly obnoxious and Food Network-y.

In a microwavable bowl, put in two tablespoons butter (I use salted, but if you have unsalted, you can use it), about half a tablespoon of minced capers, and about a tablespoon of lemon juice. Plus pepper, if you want.

Then you put in the microwave for about thirty seconds, until the butter is melted, stir it all up, and there you have it: sauce. For fish. That does not require a separate pan or multiple ingredients.

* One of these days, when I completely lose my mind and I'm not chasing around after time-sucking children, I will try pickling nasturtium buds as a caper substitute. You can do that, you know. At least, that's what I hear.
Posted by Kristin @ Going Country at 4:57 PM 5 comments: