It's inevitable that as soon as a baby is born, people start talking about who that child looks like. It is also inevitable that people pretty much see what they want to see, remarking on a likeness that is not apparent to anyone else.

My babies were no exception. Their features have been compared to every member of every family they are related to. But there are some absolute certainties: Cubby has my green eyes. And Charlie has my curls.

Okay, they're not exactly my curls, as mine are very dark and very curly. But since A. has never in his life had a hair that so much as waved, Charlie's blondish little curls can definitely be attributed to me. 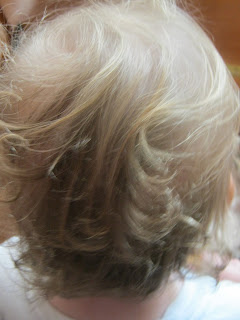 And the curls don't even look all that curly in this photo, which is misleading. But what do you expect from a picture of the back of a baby's head?

Speaking of that curly-haired child, I brought him to the pediatrician for his one-year visit today. He got a lot of needles stuck in his defenseless thighs. He also got weighed and measured, coming in at 22 pounds and 32.5 inches. Which means he's still very long and quite lean.

Perfect, in other words. But we already knew that.
Posted by Kristin @ Going Country at 4:55 PM 1 comment:

Yes! It's time for another installment of Kristin's Kitchen Tip of the Week! Which is actually more like Tip of the Year, because that appears to be the frequency with which I post a handy tip.

Whatever. Let's pit some cherries.

Now, right off the bat, I need to acknowledge that pitting cherries sucks. It's tedious and time-consuming and annoying. Especially if you happen to be standing at the sink in your 87-degree kitchen while you're pitting, with sweat literally dripping off your face and trickling down your back.

Let's hope that's just me, though.

There is no easy way that I know of to pit cherries. Even if you get a little gadget, the cherries still have to all be pitted individually. So you may as well just go to your desk and get a paper clip. Works just as well.

Yeah, that's what I said. A paper clip. Just a regular old paper clip, of the sort used to, uh, clip together paper. What you do is, you unbend it until there's only one hook at one end. And then you use the curved part of the hook to get the pit out. Just jam the curved part in at the stem end and pull out the pit*.

There is, of course, a YouTube video showing this. Though the person demonstrating is much more concerned with the appearance of the cherry, stressing that you should rotate the cherry to loosen the pit so there's only a small hole in one side of the cherry and the other side looks nice.

Right. I was boiling the shit out of my sour cherries (procured for free from a neighbor with too many on his tree) with sugar to make cherry sauce, so I didn't give a damn about holes. I just pulled the pit out without rotating anything, which makes the cherry kind of rip apart, but like I said: didn't give a damn. But if you're into aesthetics, by all means, rotate away.

It took me about half an hour to pit around three pounds of cherries. Which made one and a half pints of sour cherry sauce. Not much return on the time investment, but since the cherries were free and so was my cherry pitter, all it cost me was time.

* This tip is brought to you by the same brilliant mind that taught me the easiest way to cut corn kernels off the cob. That MiL of mine sure is handy.
Posted by Kristin @ Going Country at 6:05 PM 7 comments:

I Fail at Photos Again

I know you've been absolutely rabid with curiosity about the garden this year. What about the beans? Have they survived a rabbit invasion (unlike last year)? What about the kohlrabi? What is that, even? WHAT ABOUT THE TOMATOES, FOR GOD'S SAKE?

Not to worry, my lovelies. Brace yourselves for exhaustive garden nattering, without even the dubious relief of photographs. Because I'm too lazy to bring my camera out there when I tour around looking for green beans.

Spoiler! The green beans are thriving! Mostly because I planted them in the part of the garden closer to the house, so the rabbits came through the gully fence and stopped at the peas near the fence to gorge rather than risk coming too close to the dogs to get to the beans.

They did eat most of the peas, but that's okay. I consider those almost a sacrificial rabbit crop at this point.

We had a banner year for kohlrabi this year. I guess it liked all the rain. Kohlrabi is really weird looking. It looks like this. The bulbous part is peeled and then either eaten raw or cooked. We like it raw. It tastes like a broccoli stem, which is my favorite part of broccoli. The greens can be cooked just like collard greens. We ate all the bulb parts raw and then I blanched and froze most of the greens for the winter. Bonus.

The beets also enjoyed all the rain, but they really need to be pulled up now and dealt with before they get all woody and gross. That'll be a nice chore for one of these 93-degree days we're going to have this week. Nothing like boiling an enormous pot of beets to turn the kitchen into a sauna.

I planted a relatively small corn patch this year, mostly for Cubby. The corn is just starting to tassle. I think most of it will probably be consumed raw off the cob while standing in the patch. Cubby does love his corn.

We have insane numbers of leeks out there. INSANE. Which will be most welcome around January, when they're STILL out there. Hooray for vegetables from the garden in the middle of winter!

I planted a few jalapeno pepper plants. They have not done a damn thing except sit there, essentially the same size as when I put them in. Guess they haven't liked the rain, unlike the kohlrabi and beets.

The basil, on the other hand, is a riotous collection of bushes that really need to be whacked down and pesto-ed.

And the tomatoes? Still waiting for The First Tomato. Waitingwaitingwaitingwaiting. There are a lot of tomatoes on the plants already, though, so when they start getting ripe . . . well. The Crazy returns. 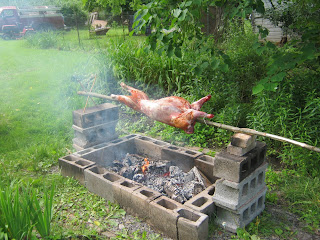 A whole skewered lamb on a homemade fire pit. 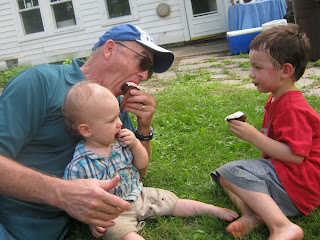 I think Cubby was appropriately impressed at his grandfather's ability to fit a whole cupcake in his mouth.

It was a good party.
Posted by Kristin @ Going Country at 3:08 AM 2 comments: