In Pursuit of Leeks

Yesterday afternoon Cubby and I were outside wandering around, as we do every day that it isn't actively raining.  Snow?  Sure.  Nineteen degrees?  Make sure the snow pants are on and the ears covered, but get that child outside.

Inside is no good for Cubby and, by extension, me.  So outside we go, weather be damned.

As we were meandering about, I happened to think of the leeks still in the garden.  And of how delicious leek and potato soup is.  And how long it had been since we'd had it.  So I re-directed Cubby to the frozen garden, where I grabbed the shovel and set about digging leeks.

Did I mention it was nineteen degrees?  Because it was.  Prime digging weather, right there.

Surprisingly, I got the shovel in at the end of the row with no trouble, but when I pried up on it, I ended up leveraging out basically the rest of the row.  That is, a continuous two-foot chunk of frozen dirt with about seven leeks inside.

Since I had already ripped all of those leeks up by the roots, I figured I'd better get them out of the garden.  But the chunk of dirt was too big to carry, so I hacked at it with the shovel until I could at least lift the two pieces.  Then I instructed Cubby to carry one (he couldn't really, but it occupied him while I got the other one to the house), figuring I would fill a bucket with water and put the leeks and dirt in the water to thaw the dirt and free the leeks.

But while I was hauling my enormous block of frozen dirt and leeks to the house, I slipped on some mud on an incline and fell flat on my ass.

Seriously.  MUD?  It was NINETEEN DEGREES.  WHAT THE HELL?

I was mad.  And covered in mud.  So by the time I got to the house, I didn't have the patience to slop around with buckets of water.  Instead I literally threw the chunk of dirt at the low concrete retaining wall near the shop door.  This worked surprisingly well.  I thought it would break the leeks up too, but they ended up just kind of breaking out of the frozen dirt whole, as if coming out of a mold.

The soup was delicious, but I will not be digging leeks again until the temperature gets above freezing.  I can learn.
Posted by Kristin @ Going Country at 4:13 AM 7 comments:

I'm sure you all remember my hit cooking show, "Kristin's Kitchen."  I made one very successful episode*, and then it got canned by the network.

But now!  Let us revive the show as a spin-off!  Because I have a co-host now.  Like my hero Jacques Pepin, who did some cooking shows with his daughter Claudine.  Except Claudine was able to use a knife and presumably put on her own pants, unlike my co-host.

I refer, of course, to Cubby.

So let us begin the new show, "Kristin and Cubby's Kitchen."  On today's episode is German Shepherd's Pie, a recipe of my own devising that's like regular shepherd's pie in that it's meat topped with mashed potatoes.  But with a distinctly Teutonic tone, thanks to the sauerkraut, caraway seeds, and beer.

While the potatoes are cooking, into a large pan goes some tallow and around two pounds of ground beef (this recipe, obviously, makes A LOT)  to get browned up, along with a diced onion.  The onion was a large one to start with, but it had some bad spots that had to be cut out, so maybe it ended up being a medium onion in the end.

After that's all browned (the meat) and soft (the onion), I chuck in a couple of teaspoons of caraway seeds and some rinsed sauerkraut.  (This sauerkraut, but of course.)  I think I ended up with about two cups of sauerkraut in there.  And I rinsed it enough that I had to add some salt.  Also, pepper goes in now.  And no, I do not measure my pepper because I grind it from a grinder and I'm not about to grind it into a bowl and then pour it into a measuring spoon or something.  How irritating would that be?

Okay!  Now for the beer!  I used about half a bottle of Bud Light.  And the reason I used it is because someone left it outside after the baby shower (yes, people brought beer to the baby shower--people bring beer to EVERYTHING around here) and then it froze solid and busted the cap off.  So I had a partial bottle of flat beer sitting around.  So I poured some in.   Why not?

Then it simmered for awhile while I went to fetch Cubby from upstairs.  I could hear A. trying to answer the phone in his office while simultaneously attempting to keep Cubby away from the kerosene heater in there, so I figured it was an opportune time to resume my child watching role.

Now the potatoes were soft, which meant they had to be mashed. 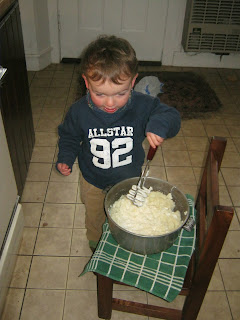 After allowing my quite willing but also quite ineffectual assistant to mess around with the potatoes for awhile, I appropriated them for the serious mashing.

Then I dumped the meat mixture into a big rectangular Pyrex dish and spread the potatoes on top.  Then I put some bits of butter on top of the potatoes while Cubby did this: 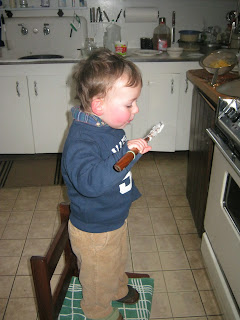 Not quite as good as a cake batter spoon, but appreciated nonetheless. 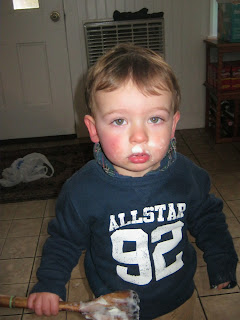 It didn't go in the oven right away, because it was only two in the afternoon, and we are not in the habit of eating dinner at 3 p.m.  So I reserved some of the mashed potatoes and mixed them with some sauerkraut for a snack for Cubby. 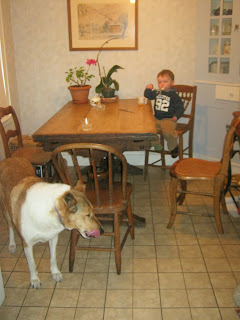 And, by extension, Mia.

The resulting German Shepherd's Pie** bakes at 350 degrees for about 45 minutes, until it's crispy and brown on top and hot and bubbly underneath.  The mixture sounds weird, I know, but it's surprisingly good.  Cubby was very proud that he helped me make the pie, and ate a large amount of it at dinner.

He's got a ways to go before he's a very useful kitchen assistant, but this is a good start.


** When I named this thing a couple of years ago, I didn't even think of the dog breed until the MiL laughed and complimented me on my cleverness.  And of course, I pretended that that had been my little joke all along, when really . . . no.  Not that clever.
Posted by Kristin @ Going Country at 3:45 AM 3 comments:

Thank you all for your felicitations on our momentous news.  Some quick items of interest:

Lindsey:  Yes, we are happy.  No worries on that account.  I guess my limerick wasn't clear enough on that point.

The child's current name, courtesy of A., is Precious Cargo.  As in, "How's the Precious Cargo today?"  We are open to other naming options, however.  Beth:  Chainsaw is not one of them, although Burl has definite possibilities.

My due date is technically July 15, although I have scant faith in due dates, thanks to the early arrival of Cubby.  What is certain, however, is that this child will be born at a time of year that is much more hospitable to vulnerable new life than poor Cubby's time of arrival.  I never want to have a newborn at Blackrock in February again, thanks.

This timing means that I was newly pregnant on the day when I was whining about cutting up the deer.  Although I am extremely fortunate to be among the minority of pregnant women that never throws up, NO ONE should be cutting up a dead animal in the first stage of pregnancy.  It is unappealing in the extreme.  But I did it anyway.  Where's my prize?

Yes, we will find out the sex.  I am too much of a control freak to wait until the birth.  That appointment will be in March sometime.  Start placing your bets now!

Remember that girl named K.,
Who married that boy named A.?
Well, then there was Cubby,
And THEN, K. said to hubby,
"Guess what?  There's another on the way!" 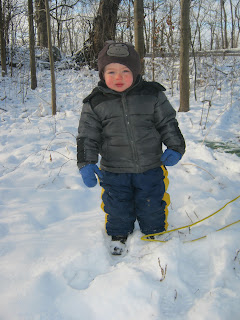 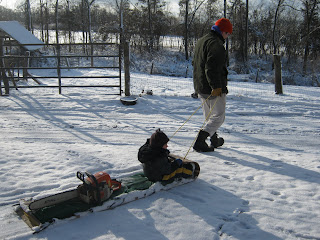 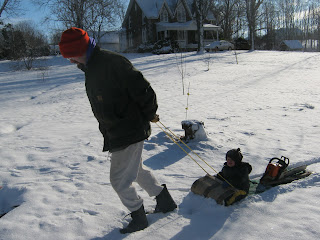 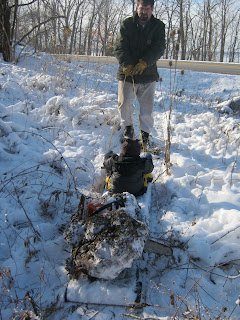 P.S.  In case you were wondering why there's a chain saw on the toboggan behind Cubby and what those things are on the toboggan in the last picture, A. wanted to cut some willow burls for my dad, the (not amateur) carpenter extraordinaire.


P.P.S.  Toboggan courtesy of A.'s Uncle Roger, who I'm sure will be happy to know that the toboggan he gave the family so many years ago is now serving a new generation.
Posted by Kristin @ Going Country at 3:45 AM 3 comments:

Hey, remember awhile ago when I was all excited about the fruit soda I made from failed jam and seltzer?  Well, know what's even better than that?  Fruit soda made from dissolved jelly and seltzer that I made myself in my SodaStream.

I've been thinking about getting the SodaStream for a couple of years now, because I really love seltzer and I really hate buying it all the time.  And then, Finny got one and recommended it.  Finny's my buddy.  We like a lot of the same things.  I trust her.  So then I knew I had to get it.

But it ended up that my mom got it for me, because she wanted some Christmas and birthday gift ideas, so I very generously said she could give me the SodaStream.  I aim to please.

I really cannot tell you how much I love this machine.  Yes, it takes up valuable real estate on my already-crowded counter, which is no small consideration, but it turns out that when I'm making my own seltzer instead of buying it, I can drink even MORE seltzer.  About three liters a day, as a matter of fact.

That's a lot of fizzy water.

I can also make fruit sodas on demand for a baby shower with jelly from my cellar and all the seltzer I need from my machine.  Seriously awesome.

So, in sum, love my SodaStream and love my mom and dad for giving it to me*.  That's all.

* That's not all I love them for, obviously, as I am not that shallow.  But it helps.
Posted by Kristin @ Going Country at 5:29 AM 7 comments: