Not that Poppy and I did any of the camping or traveling, but the rest of the family did.

Long version: A. had found some frozen tilapia fillets at the grocery store the day before, so he got them for our no-meat Lenten Friday meal. He cooked them in the oven covered in garlic, lemon juice, and a full stick of butter. He joked that he's going to start a cooking site dedicated to ways to get the most fat into your food.

I had to bake bread right before dinner, so instead of frying potatoes as I had planned, I decided to just slice the still-warm bread and cover it in butter. Yum.

Short version: Camp food for the boys, leftovers for the girls

Long version: For the campers, I made what A. calls Hobo Packets, which is any kind of food that can be wrapped up in aluminum foil and heated up in the coals of a fire. In this case, I put in boiled sliced potatoes--tossed with butter, salt, pepper, garlic powder, and paprika--plus slices of leftover steak on top of that. I also put a couple of extra pats of butter on the steak, as it was quite lean. 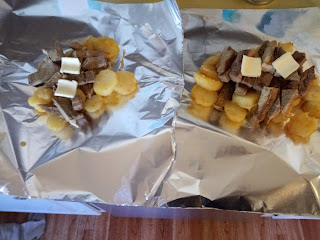 In addition, they had Fritos, cheese, carrot sticks, apples, and marshmallows. The latter three were apparently all roasted over the fire on sticks. Charlie tells me he likes carrots cooked this way, but no way else. So if I want him to eat cooked carrots, I have to spear them and cook them over an open fire.

Poppy and I had a mixture of diced leftover potato and pot roast cooked in a skillet with a couple of tomatoes from an open can in the refrigerator, green peas, and some garlic powder. This was very good, actually, and didn't require any real cooking to get a hot meal. Hooray for leftovers.

Long version: Yes, I get excited enough about avocado that I must use an exclamation point. A. went to a big grocery store on Friday and thus was able to get me some avocados. Avocados make everything better.

Long version: A. and Charlie left for a special father/son trip to Carlsbad this day. To keep Poppy distracted while I was making dinner, I put the little rocking chair in the kitchen, gave her her water bottle, and stationed her attendant behind her to do the rocking. 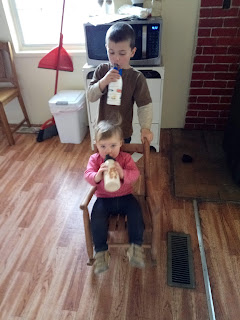 Because I know how to please a tiny toddler.

Long version: I had quite a bit of chicken left from Wednesday, which Cubby and Jack requested I make into chicken salad. And then I had to bake bread in the afternoon, so we had fresh bread. It all worked out.

I gave the kids still-frozen green beans to eat while I was putting together dinner and then plopped some grape tomatoes on their plates. Lame, but they got two vegetables in one meal. Go me.


My sister sent me an areca palm as a housewarming present. I placed it in the same spot I had the Christmas tree, and the other morning I realized that it gets a direct beam of light just as the sun is rising in the morning. 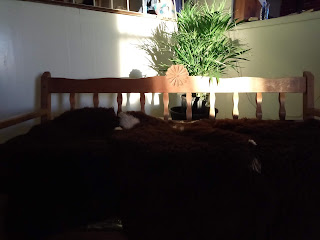 Spotlight on the areca.

This makes me happy every time I see it. Lucky for me the sun rises every morning, so I have a guaranteed bright spot to my day every day.

That's all. Have a bright day, my lovelies.

Labels: all about me, new house


A. took the boys camping last night, leaving me and Poppy to live it up at home, just us girls.

I stopped short of face masks, but I did make some brownies. Mostly because I had over-floured the counter last time I was kneading my bread and ended up with about half a cup of flour that I didn't want to just throw away. And what recipe uses just a half cup of flour? Why, this delicious brownie recipe, of course.

In all honesty, it was not a particularly thrilling afternoon and evening. We went for a walk to the post office. We read It's Spring over and over and over and over. ("In April the robin began to sing to tell the rabbit it was spring. . . " You want to know the rest? I know the entire thing by heart.) We had some dinner. 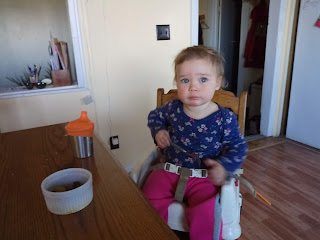 And one of us wore bright pink sweatpants, because you have to be comfortable AND stylish for a girls' night, right?

One of us also had a bubble bath. 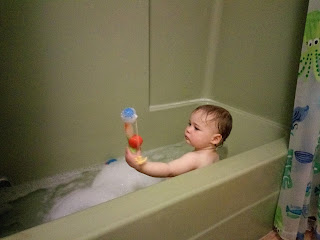 Still a bit skeptical of this bubble business.

That girl was in bed by 6:30 p.m. I was exhausted and seriously considered going to bed right after her, but I decided that was just too lame, as well as a waste of a rare night on my own. So I watched the movie Return to Me, which is a fantastic movie and one of my favorites. It is also, more importantly, available for free on Amazon Prime streaming.

The menfolk got back around 9:30 this morning, smelling of campfire smoke, covered in smears of roasted marshmallows and with many stories*. A good night for all.

* The most interesting was that an elderly Apache women in full traditional dress showed up at their campsite--one that A. found way off the beaten track by a lake--with her grandson and told them that the local tribe used to have their meetings at that site when she was young. She was very pleased to come upon a tent and a fire and three shirtless boys digging holes and chopping wood with hatchets. She said it reminded her of the tribal gatherings.