It is currently four degrees with no wind. This means, if the cold and the stillness continue, the lake may actually freeze over.

I don't think I can convey to you how excited A. would be if this happened. I think the last time the lake froze all the way across was in the 1930s. See, our lake is deep and wide (about 3.5 miles across from our beach to the opposite shore), but most of all, it's windy. Really, really windy. That's the reason it rarely freezes all the way, and the reason A. is going to be monitoring the condition of the lake closely for the next 24 hours.

I'll keep you updated. Do you think I would let you miss out on this excitement?
Posted by Kristin @ Going Country at 7:01 AM 7 comments:

Labels: the A team, weather

Video number four last night in the continuing series of Birth Videos I Mostly Ignore featured Bryce, Joyce, and their C-section. Obviously, I averted my eyes during the part where they were slicing into Joyce like a high school biology lab specimen, but there was a lot that happened before that. Poor Joyce basically went through her entire labor before they decided a C-section was necessary, so there were many fun shots of Joyce whimpering and crying and screaming . . . you know, all the beautiful and amazing things we all look forward to in the process of Creating New Life.

I don't know how my labor will progress. I also don't know how I'll react to it really. I did, however, learn one thing from that video last night that I am almost sure is NOT going to be involved in my experience, just based on my own understanding of my personality. And I have Bryce to thank for this knowledge.

Bryce was of the opinion that the most helpful thing he did while his partner was in labor was keep her focused on him. All well and good, but he did this by actually touching foreheads with Joyce, so that he was quite literally in her face.

Now. I love my husband. I want him there for the birth of our son, and I want his support. But I told A. that if he takes Bryce's advice and grabs my head in his hands to get nose to nose with me during a contraction, I will punch him dead in the face.

Fair warning.
Posted by Kristin @ Going Country at 5:53 AM 15 comments:

Labels: all about me, baby stuff, country wisdom, randomness, the A team

And that's what makes me think of the beach. Because I wish to be on one, you see. This is incredibly stupid, as I am so emphatically not a Beach Person. I don't like sun, swimsuits, heat, or swimming in the ocean. Or sand. That's pretty annoying, too. But such is the effect of the dreary upstate New York late winter that around this time of year, I start to think longingly of beach-y places.

So, join me in my Beach Delusion, poppets! Where would you go right now if someone were to hand you a plane ticket good for anywhere with a beach?
Posted by Kristin @ Going Country at 5:52 AM 24 comments:

Labels: all about me, confessions, randomness, weather

More than a week ago, I mentioned this little cold that was just gearing up to make me feel like shit for awhile. And I breezily predicted that the shit-phase would be "a few days," blithely ignoring that whole "compromised immune system" that comes along with pregnancy.

And that brings us to now, which is definitely more than "a few days" later.

Hello, shit-phase! I think you have been around long enough! Please take your mucous and go away. Thanks so much.

Love,
The pregnant lady who is having enough trouble sleeping without suffocating from a stuffed-up nose every night and may be getting a little cranky, thankyouverymuch
Posted by Kristin @ Going Country at 6:32 AM 4 comments:

It's funny the things I seem to need to feel safe and secure. Not locked doors--our doors are never locked. Not an alarm system (besides our current Triple-Collie Alarm, of course). No. Mostly what I require to feel secure is water in the cistern.

I know. So easy to please.

You see, when the water in the cistern gets low and I have to be careful about doing laundry or taking showers, I get nervous. If the water gets TOO low in the cistern, then the water pump will burn itself out, and that would be a Bad Thing. So, I worry.

The water got low about a week ago. I didn't look to see what the level was myself, but when I asked A. after he took a look, he said it wasn't good and I should avoid unnecessary water use. Great. And everything was frozen, so we couldn't do an emergency pumping to refill the cistern. This is the problem in the winter. However, A. took the opportunity to re-build his dam. Then we got a couple of days when it thawed a bit, so that snow melt made the tiny creek in the hollow run, filling the pond in front of the dam enough that A. pumped water to avoid a crisis. Not a lot of water, but enough.

Then it started to rain. And rain and rain and rain. We were under flood watch and everything was squishy, muddy, and filthy. And I was thrilled. Because all this rain made the weensy little creek into a raging torrent (relatively speaking), allowing A. to pump enough water to actually fill the cistern to the very top. That's many thousands of gallons of water, enough that we shouldn't have to worry about water for at least another month. By which time there will probably be another thaw that will allow us to pump again.

But I won't worry about that next thaw yet. Instead, I'll just bask in the happiness that is a full cistern. It truly is the simple things in life. At least, in MY life.
Posted by Kristin @ Going Country at 6:09 AM 10 comments:

Okay. Your long, impatient wait is over. I know I totally ruined your week last week by teasing you with hints of baby shower photos and then never posting any. Because my life is so entertaining and all-consuming for other people. OBVIOUSLY.

My sister sent me the photos she took. So, without further ado I present: The Shower. 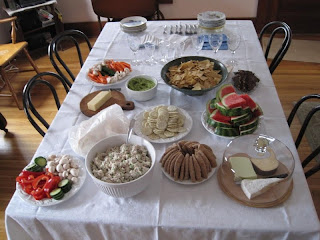 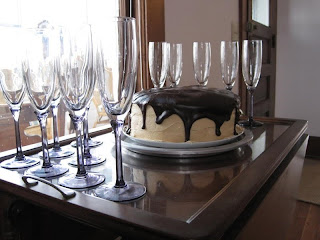 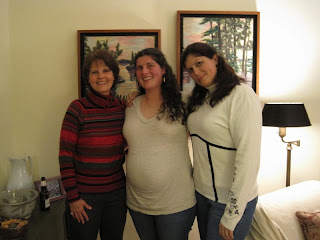 There were numerous gifts, many stories about babies and other things, quite a few probably inappropriate but nonetheless highly entertaining jokes, and laughter. Lots of that.

It was a good party. I guess all that's left to do now is for me to actually have the baby, right? Right.

* Actually, there was lots more family. These are just the members of MY family that were there.
Posted by Kristin @ Going Country at 5:52 AM 15 comments:

Labels: all about me, baby stuff, family, friends

At Least It's Edible

Everyone has fungus in the bathroom (don't even try to pretend there's no mildew in your bathroom--I know the truth). We tend to have more than most, what with the stone walls and the cold and the steam and the perfect conditions for mold to grow. Gross. I wage a never-ending and pretty much losing battle against bathroom fungus at all times. So why did I decide to cultivate it voluntarily?

While flipping through seed catalogs some months ago, I noted that the spruce tree stump outside the kitchen door seems to be perfect for mushrooms. You can buy the spores to inoculate stumps and logs from seed catalogs. So I mentioned that to the room at large, which at the time happened to contain A. and the MiL. And then I got a portabella mushroom growing kit from the MiL for Christmas. You see how this all connects?

The kits are not the straight-up inoculation spores that I had been looking at. The kits are pretty much self-contained little fungus gardens. You don't have to have anything yourself. Not even a container--you just use the box it comes in. There are detailed instructions included, with multiple steps required. Also multiple temperatures, which posed something of a logistical problem, since there are few places in our house that are 65-75 degrees at all times and are not accessible to the Devil Cat, who would find a box full of dirt to be irresistible for her dastardly deeds. Also, it must be dark. So the initial stage for the box took place in the downstairs bathroom.

The next stage involved misting with water regularly and a temperature of between 55-65 degrees. And dark. So the box was moved upstairs to the MiL's bathroom, which is generally not quite as warm as the downstairs bathroom, but is heated with a space heater and is, once again, safe from the Devil Cat and her deviltry.

It took awhile to get to this part, and there were other stages, but once I got past this stuff and the mushrooms actually appeared, they grew alarmingly fast. And before I knew it, I was heading upstairs with a bowl to harvest mushrooms from the bathroom. Which is not a place you normally anticipate finding edible things. 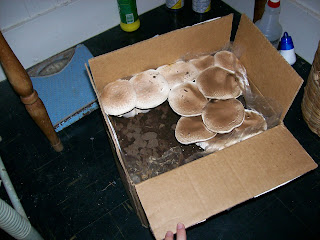 The Comet behind the mushrooms is NOT edible. Just so you know.
The kits are not an economical way to grow mushrooms, but they are pretty fun. Especially if you're not really a gardener and don't normally have the supplies around to grow things yourself. The instructions claim I can start the process over and possibly get more mushrooms from this one box, so I'll do that. And then I'll inoculate that spruce stump this summer and harvest some mushrooms that were not grown within eight feet of a toilet.

Modest goals, but they work for me.
Posted by Kristin @ Going Country at 5:42 AM 9 comments: