Long version: Not the most exciting Lenten Friday meal, but it got the job done. And the children never complain about pasta with pesto.

Long version: I took out a front leg from the ram and cooked it covered in the oven for a few hours with tomato juice from a can of whole tomatoes, garlic, and a bay leaf until it was tender. Then I pulled it into chunks and fried it with a few of the canned tomatoes, mashed up, garlic powder, and salt. It came out really well.

Long version: The only notable thing about the tacos is that I made the corn tortillas for them this time. Always a hit.

The Sprite was something Charlie brought home from school. It was a liter bottle, and he decreed that it should be saved for Sunday dessert.

So the children had Sprite on ice for their Sunday dessert. Works for me. No baking involved.

I'm telling you. Those low expectations for children are so key. 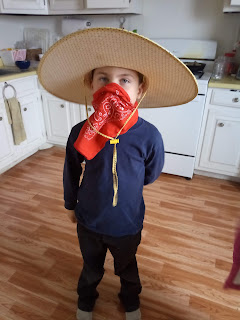 Hand over the Sprite and no one gets hurt.

Long version: A. decided the time had come to, um, "harvest" the two female rabbits that had failed to have any live babies. They were pretty old, so I put them in the oven with onion, garlic, bay leaves and water in my big Pyrex, then covered it with aluminum foil and cooked that for several hours.

I was trying to avoid having to hack them up to fit in a stock pot, although that's what I should have done, because they weren't even close to tender at 4 p.m.

So I laboriously removed most of the meat from the carcasses, then put that meat in a skillet with the remainder of the liquid from the pan and simmered it, covered, some more. When it was tender enough to eat, I added some more onions I had cooked in a pan that had leftover bacon grease in it from breakfast, thyme, Dijon mustard, and some heavy cream.

Rabbit meat definitely needs lots of help to make it tasty. This was. The children were very enthusiastic about it as well. Well, except for the Serial Complainer who tells me he doesn't like sauces. Super.

Long version: And NOW I could break the rest of the carcasses up and boil them until the meat was tender. Which is what I did, with celery, onion, and carrot to make a stock. With the meat I picked off the carcass, plus some leftover taco meat, onion, garlic, celery, carrot, potatoes, a few tomatoes from an open can in the refrigerator, green chilis, and the stock, I made soup.

I thought it was really good. The Serial Complainer did not agree. Oh well. He ate the cheese and the potatoes from his soup. He won't starve.

Long version: One benefit of waking up early is that I always have time to cook even slow-cooking foods. I put the brisket in at 5 a.m. (with the last of the tomatoes from the can in the refrigerator, some of the chopped onions I had stuck in the freezer, vinegar, bay leaves, salt, pepper) and it was done by noon.

Both of the vegetables came from the freezer. I had several quart bags of cabbage I had just chopped and chucked in the freezer in the summer. No blanching or anything. So I put some of that cabbage in a skillet fully frozen and fried it in butter. It worked fine, which is very nice to know.

The baked beans came from Miss Amelia. She called in the morning to ask A. to come by and get some food that she couldn't eat and didn't want to go to waste. Included in what ended up being three bags of food was a container of baked beans. There was also a container of very sweet deli-style potato salad, so I suspect one of her daughters must have gotten the baked beans at the deli, too. Three of the four children very much enjoyed the beans. The child who didn't said they were too sweet.

We ran out of dog food this day again, too, because A. inexplicably got a very small bag of it when he last bought it. I guess because he got it at the grocery store rather than the feed store? In any case, we ran out. So I took out a cow tongue for the dogs. Which meant I had a tongue thawing on my counter all day.

If you've always wanted to see what a cow's tongue looks like outside of a cow, this is your lucky day. If the very thought is horrifying to you, you should stop reading now. 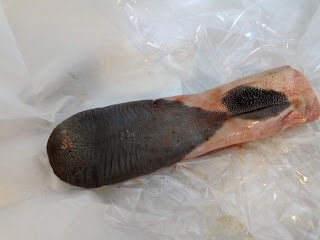 Long version: Charlie, Jack, and Poppy had leftover taco meat in corn tortillas with cheese, plus some grape tomatoes.

Cubby and I had leftover rabbit and beef soup. Cubby also had some of the very sweet potato salad. And that's a wrap.

I appreciate all the kind comments on yesterday's post, and it looks as if Tuesday Tips carry the day.

And now for your real thank you: an adorable child story. Whee!!!

So. Poppy's hair is now long enough and thick enough that I can do things like put it in ponytails. Or pigtails.

She also often asks for a bun, mostly because my hair is usually up in a (very, very messy) bun.

So, we have a singular ponytail. And the plural is pigtails. (Even though both ponies and pigs only have one tail, yes.)

And then we have a singular bun. So what's the plural of that?

Poppy knows, and she told me. 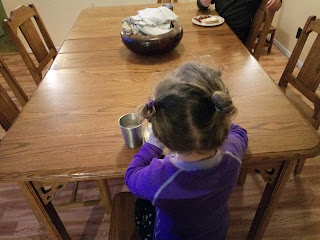 The name is almost as cute as the girl.

You'd better believe that I will be calling that hairstyle pigbuns for the rest of my life. And I will be sad when that girl is too big for pigbuns anymore.

T.T.: How To Write a (Very) Long-Running Blog

Just start randomly sending words out into the vast void of the Internet, and before you know it, 14 years will have passed.

Yup. Today is the fourteenth anniversary of this small, generally unknown blog. I know it's trite to say it, but I literally cannot believe it's been 14 years.

That's a reaallllly long time. It's also 3,091 posts, tens of thousands of words, and hundreds of readers.

That's you! And I appreciate each and every one of you.

So today, on this anniversary, I have a question for you: Do you want me to keep doing the Tuesday Tips? I still feel kind of weird giving advice that no one actually asks for, but if it's helpful to you, I'll continue.

Otherwise, I'll still post on Tuesdays, but it will be something much more random.

Random is pretty much my modus operandi, so that would be nothing new.

Anyway. Happy Anniversary to Going Country. Might as well shoot for another decade or so, right?

St. Patrick's Day started at 5 a.m. with a phone call from the school to let us know we would be doing "remote learning" this day, because of the snow.
"Remote learning" means Zoom. And this is how the pandemic has stolen that sacred schoolchild institution: The Snow Day.
Charlie made a sign to let everyone know how he feels about this: 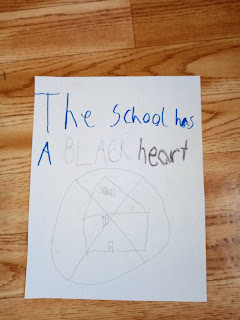 Succint, yet expressive.
His class was supposed to make leprechaun traps in school, and the boys ended up making their own at home. They stationed them in the bathroom, "because leprechauns like toilets." 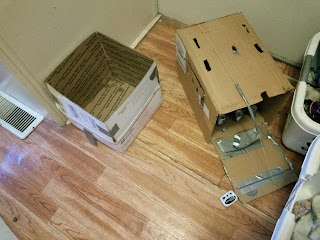 I was not aware of this preference, but, despite the toilet in close proximity to the traps, no leprechauns were captured.
Somehow after dinner, we ended up putting on music for Irish jigging. 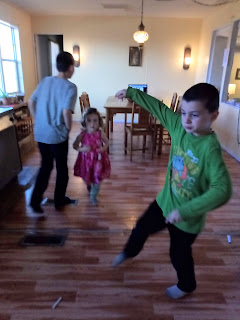 For which Poppy insisted on changing into her dancing dress.
And now, in non-St.-Patrick's-Day but exciting plant news! I re-discovered the lone survivor of the gopher-beleagured Very Fancy Tulips. 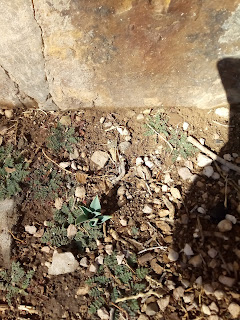 Cleverly hidden among the weeds.
We have some other tulips the kids brought home from school that are in old plastic feed tubs, to protect them from the nasty rodents, so we'll move this lonely tulip in with them. Eventually the tulips will find a permanent home in a planter in front of the house, but for now, we're just trying to make sure they don't get eaten.
And lastly, a random dog picture. 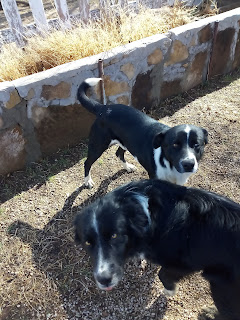 Because it's always a good time for a random dog picture.
And there you have it! My life, snapshotted.
Posted by Kristin @ Going Country at 4:30 AM 1 comment: