It's a Very Meh Christmas

The holiday hoopla is in full swing. Glittery junk all over the stores, holiday books prominently displayed at the library, people talking endlessly about gifts and decorating and baking and whatever else it is that makes them get all frazzled but determined to paste a merry smile on their faces FOR THE CHILDREN.

This year particularly I'm not into it because we're leaving Christmas Day for Arizona. I'm very excited to spend part of the holiday season with my family there, which has not happened since I moved from Arizona eleven years ago. It is making it kind of hard to get into it here, though.

In a normal year, this would be the weekend we would head to the woodchuck Christmas tree back forty to get our tree. I'm not too gung ho about doing it this year, however, since I won't be here to take it down until well after New Year's, so there's no point in getting it early only to have it dry out and die before I can take it down.

Plus, I have no doubt whatsoever that Charlie is going to rip off any ornament he can reach (and that boy has Go-Go Gadget Arms if he sees something he wants) and throw them. He's in a throwing phase. This does not mesh with Christmas trees. So I'm in no hurry to have that particular temptation set up.

Ditto on a lot of the decorating. It has to be high enough that he can't reach it. And anything HE can't reach, Cubby will find a way to reach, and anything Cubby sees that is new and shiny must immediately become his. He's like Gollum with his precious. Not looking forward to confiscating ceramic trees and candleholders from him and dealing with the ensuing shrieks of, "But I'll be CAREFUL!"

There was also the conversation I had the other day with Cubby in which he asked me over and over if Santa is real, and like an annoying, cynical parent I kept coming back with, "What do YOU think?" He said no.

We seem to have a conspicuous lack of Christmas magic around here.

Not to worry, though! Next weekend we'll make a pilgrimage with our hacksaw to get a tree, throw some unbreakable cheap ornaments on there, hand out the (real) ancient horse sleigh bells that are sitting on the mantle, and sing "Jingle Bells" on endless rotation.

Because who wants to be the Christmas killjoy for two small children? Not me. Well, not much, anyway.

Hey, anyone remember that deer A. shot a long time ago? I wouldn't blame you for forgetting; I almost forgot about it too, since he actually shot it on November 22. Yeah. Over a week ago. And it's been hanging in our shed ever since. But why, you ask, did it not get all putrid and foul?

Seriously. It could have been used as a (very heavy and unwieldy) club. We obviously couldn't butcher it when it was a solid chunk of flesh encased in hair. So we waited for a thaw. And waited some more.

Yesterday was the big day. And do you think I tried to shield my precious, innocent children from the sight of death? 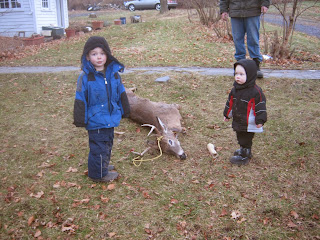 Bet you saw this one coming, right?

I couldn't have kept those feral small boys inside if I had tried. They wanted to be right where the action was. 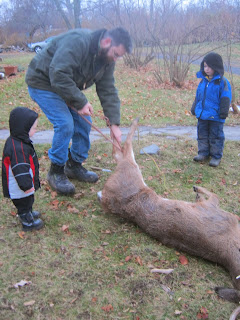 In this case, the action was at the deer's hindquarters, where Daddy was threading the gambrel through its legs to hang it for skinning.

Charlie looked a wee bit concerned in that first photo, I know. He looked a lot more than concerned when the knot on the gambrel gave way the first time A. hauled the deer up on the tree branch and the deer plummeted very unexpectedly and indelicately to the ground.

But he got over his concern pretty quickly once he found a stick. 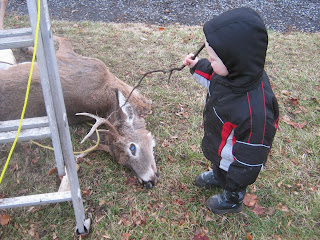 A. did manage to suspend the deer successfully the second time. He skinned it and cut it into quarters while I was putting Charlie down for a nap and getting Cubby to preschool. I managed to cut up one of the forequarters yesterday and most of the rest of it today. We ate the backstraps last night and some surprisingly good chicken-fried (venison) steaks tonight. Much venison chili is in our future. And A. is going to try to get at least one more deer.

About five years ago when my sister was coming to visit us from Tucson, she asked if there was anything she could bring me. Why yes, I said. I want a molcajete.

A molcajete, for those of you who are not from Arizona or another state with a big Mexican population, is a kind of mortar and pestle made out of very rough stone (traditionally basalt, a volcanic rock). It's the traditional Mexican tool for grinding spices and stuff like garlic for salsa or whatever.

I think at the time we had a big bag of cumin seeds I was using to make salsa and I needed a way to grind them. Small stuff like that can't be broken up in a food processor because it just slips under the blade. In retrospect, I do not know why the hell I didn't just buy a spice grinder like a normal person. Probably because I'm not a normal person. I'm a person who thinks nothing of smashing seeds in a rock vessel.

So I requested the molcajete. And my sister, being the stand-up gal that she is, made a trip to South Tucson to secure one for me and then hauled it in her suitcase all the way to New York. This was a significant feat, because HOLY HELL are molcajetes heavy. They're solid stone, and they're not really something you want to be lugging cross-country.

But like I said, my sister is swell that way. I asked, she delivered.

And then, uh, I never used it. Shame.

It's been sitting in our guest bedroom downstairs--quite decoratively, I might add--ever since then. And the reason I never used it is because of the initial preparation necessary before the molcajete can be used. See, because the stone is so rough, it has to be kind of seasoned and ground down or else the food you make in it will have little bits of stone in it.

So it has to be soaked for awhile, then dried, and then you have to grind white rice in it over and over until there's no more gray in the white rice. That's when you know it's done shedding bits of rock into your food. I never did this, so it was unusable.

Then I decided to make mustard yesterday. The mustard seeds needed to be ground a little, and like the cumin seeds, the food processor was useless. I tried putting them in a bag and whacking them with a cast iron pan. Nope, no good.

So I prepared the molcajete: soak, dry, grindgrindgrind. Then I ground up the mustard seeds. And it worked perfectly. Plus, it was kind of fun to stand there like a peasant woman in my kitchen grinding away in my molcajete. Kind of fun for a short time; I wouldn't want to do it for long, I'll tell you that. Those peasant women must have had some incredible arm muscles.

Anyway, the point is, the molcajete has finally been put into service. So thanks again, sis, for hauling it cross-country for me. Next time you come to visit, I'll make you some mustard.

* I used this recipe. It's still aging in the refrigerator, so the jury's still out as to whether it will be any good.
Posted by Kristin @ Going Country at 4:34 AM 5 comments:

Labels: all about me, family, fun with food

It was 12 degrees the other night, a temperature sure to strike fear into the hearts of those of us with unheated bedrooms. Despite the insulation A. has put in the attic above our room and over the stone walls behind our bed, our room is still without heat.

But now our bed isn't.

After talking about it for many months, A. bought an electric mattress pad. I wasn't aware such a thing existed, and I was skeptical of having heated wires under me. But A. bought one anyway, just to try.

After shivering through teeth flossing and brushing in the unheated upstairs, then taking off nice warm clothes and putting on cold pajamas, being able to slide into a heated bed is about the best thing ever. I hear angels singing every time I get in bed and instead of icy cold sheets that take an hour to warm up there are toasty heated sheets. It is bliss. And we fall asleep faster because we aren't lying there clutching each other for 45 minutes, waiting for the bed (and us) to warm up.

I turn the pad on when I put Cubby to bed so it has an hour or so to heat up before we go to bed, and we turn it off when we get into bed. It's perfect because we don't want to sleep in a heated room, we just don't want to get into a freezing bed.

So props to A. for forging ahead despite my reservations and solving our problem. He's a smart one, that guy.
Posted by Kristin @ Going Country at 10:20 AM 6 comments:

Labels: all about me, Blackrock, the A team, weather
Newer Posts Older Posts Home
Subscribe to: Posts (Atom)