And since this so-called "winter" has really just been an extended mud season, there have been a lot of suppressed cuss words this year.

It has to dry out eventually, right?  Right.  Like in July.

*  This post brought to you solely to appease those of you who would worry if I didn't post the day after talking about Cubby's illness.  He's fine.  Snotty and drippy and not sleeping entirely soundly, but fine.
Posted by Kristin @ Going Country at 11:55 AM 2 comments:

What the Hell Is Croup?

It's an illness you only learn about if you have a child.  Also, the illness Cubby currently has.

Croup is a contagious respiratory thing that makes your kid sound like a particularly obnoxious barking seal, but it's not serious.  One of the treatments is a humidifier.  Or, if you don't have a humidifier, running your shower as hot as you can and sitting in the steamy bathroom.  As we have neither a humidifier nor enough hot water to allow us to run the shower unnecessarily, A. and Cubby just played with some blocks on the floor of the bathroom while I actually took my shower this morning. I don't know if it was very effective, but it can't hurt anything.

Anyway, based on Cubby's behavior--that is, as full-tilt and insane as ever--it's quite clear he's not suffering any distress.  And so we will just wait out the next few days and the seal impression until Cubby is once again his impeccably healthy self.

Have a wonderful weekend, duckies!
Posted by Kristin @ Going Country at 5:13 AM 7 comments:

I don't know how we got anything done around here before we had Cubby to help us. 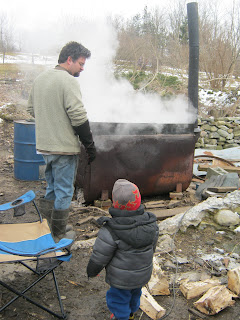 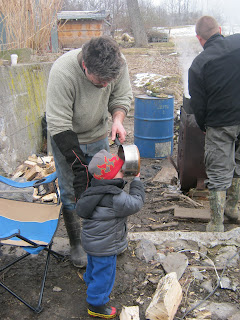 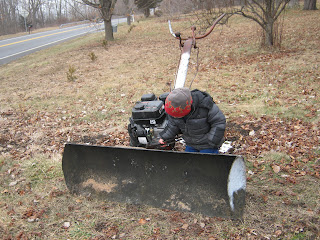 At least, he thinks he's instrumental.
Posted by Kristin @ Going Country at 4:32 AM 4 comments:

Labels: country livin', Cubby, fun with food, the A team

Is That Love I Smell in the Air?

Oh wait.  No.  That's woodsmoke.  From the evaporator. Burning outside to reduce our maple sap to syrup.

What?  Doesn't everyone celebrate Valentine's Day by subjecting large quantities of liquid to scorching flames?

No, I guess not.  And it would probably not be how I would celebrate it, either, were I married to any other man.  But as it is, the evaporator is going, A.'s friend Jason is here, and by the end of the day we will once again have maple syrup.  Good thing, because I ran out last week.

Maple syrup is better than roses, in my opinion.  And now I think you can see why A. and I have managed to stay married for almost nine strange years now.

Happy Valentine's Day to you all, poppets!  Anyone doing anything good to celebrate love today?
Posted by Kristin @ Going Country at 5:22 AM 11 comments:

Labels: country livin', friends, fun with food, the A team

A Man and His Machine

A.'s birthday present to Cubby was getting the walk-behind tractor running.  At least, that's what he claims.  I'm sure A. had no interest whatsoever himself in running this particular loud, recalcitrant, and rusty piece of machinery.

You may remember the walk-behind tractor from many, many months ago when A. retrieved it from my almost-brother-in-law's mom's ex-house (got that?).  Since acquiring this gem of antique machinery, A. discovered that it's called a Dandy Boy Clipper, probably around sixty years old.  And that the engine was shot.  Imagine that.  So he put another engine on it.  And then he had to put on a new pulley.  And then he had to figure out what to do with it.

A walk-behind tractor will pull or push heavy things.  That's its sole function.  There are various attachments that used to be available for them, things like plows and tillers.  They were available sixty years ago, when they were still in production.  It's a littler harder to find those attachments now.  So A. didn't have any.  But he really wanted to use his tractor.

That's why he cut down the enormous, overgrown yew bushes in front of the house.  We've actually been talking about doing this for some time, but the lure of pulling something with the new toy was the impetus A. needed to chainsaw those huge bushes to the ground.  Then he tied them into big bundles, attached them to a hitch he created on the tractor, and dragged them down to the beach for eventual burning. 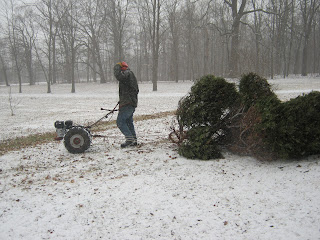 This required going across the very busy road between our house and the beach.  I can only imagine what the passing motorists thought when they saw this.

It worked.  And so, fired up by the great power at his fingertips and the several inches of snow that fell Saturday and Sunday, A. spent Sunday rigging up a plow for the Dandy Boy.  He did this by cutting an old water heater in half and attaching half of it to the tractor by means of wood and bolts.  Or something.  I wasn't outside for the construction.  Neither did I manage to get any photos of the eventual plowing, because  it only plowed for about ten minutes before the drive belt on the Dandy Boy broke, rendering it immobile.

But while it was still moving, it did manage to plow the driveway.  So once a new drive belt is procured and installed, we'll have a way to plow our driveway.  And who knows what other attachments A. will manufacture out of old junk he finds hanging around.  The sky's the limit.

Well, the sky and the Dandy Boy's aging parts.
Posted by Kristin @ Going Country at 3:18 AM 6 comments: