Because I Don't Want To Be That Woman


The division of labor within our marriage and house is pretty traditional. A. works full-time. I take care of the house and the children full-time. I cook. He earns money. I clean. He fixes things.

He sometimes does the dishes. I sometimes fix things. But it's frightening how quickly I can fall into the trap of thinking that just because I don't usually do something means that I can't.

Take the cellar steps, for instance. The fourth step down disconnected completely from the riser this week when the nails just rusted right out (they're probably at least a hundred years old--these things happen at Blackrock). It was possible to step on it to get up and down, but only if I was very careful to step on the back part sort of gingerly so it didn't tip me down the steps. I mentioned it to A. I said I would have to fix it. He told me the steps are made of two-inch-thick, old-growth oak and it would take some really big nails and a lot of dedicated hammering to get those nails into those steps.

So I thought I would let him do it.

That's stupid. I can use a hammer. I mean, sure, I'm not as strong as A., but the purpose of a hammer is to allow people to drive nails even without significant strength.

Still, I stepped gingerly on that step for three days before I finally mentally slapped myself and found some nails to hammer in.

It took all of two minutes. I didn't even bend the nails (I won't lie--this often happens when I have to hammer in long nails). And now I don't have to worry about going ass over tea kettle into the cellar every time I have to do some laundry.

Running a chainsaw, fixing the water pump, and lifting enormous stones are all things I'm happy to leave to my husband. But hammering in a couple of nails? Don't be ridiculous, Kristin.

Labels: all about me, manual labor, randomness, the A team

"I think we have three trucks outside right now to play with. Maybe four."

"NO, CHARLIE. Now you're just lying!"

Then I jump in: "That's enough. Stop arguing."

"I wasn't arguing. I never argue." 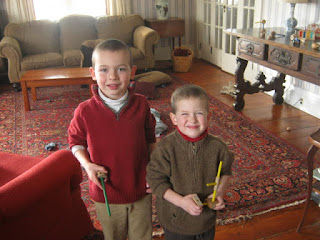 Friends to the end. Usually. 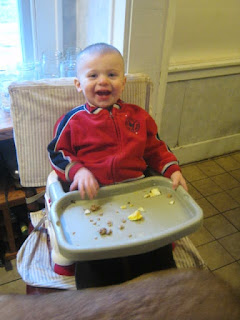 Your time will come, Jack. Just as soon as you're old enough to contradict your brothers.

Charlie woke me up last night at 11 a.m., shrieking that he was hot and needed water. What this usually means is that he is sick, though he didn't have a fever or anything.

Fifteen minutes later, he was shrieking that he was "fweezin'." And fifteen minutes after that, the phone rang with the fun news that the MiL's car had broken down and she needed to be picked up at the garage in the next village over.

Thanks for making sure I was awake, Charlie!

After I got back from picking up the MiL, I was lying in bed (for HOUUUURRRSS--I am not one of those people who can wake up and go right back to sleep) contemplating the probability that Charlie would wake up sick this morning. That would mean two things: 1) He would probably be having a meltdown every half an hour, because that's what Sick Charlie does, and 2) He would not be going to school.

It's supposed to rain all day. The prospect of being home with Sick Charlie all day in a gloomy house while rain poured down was enough to keep me awake with dread longer than I should have been awake.

But! Just to show that good things do happen in this world, Charlie woke up chipper and apparently completely healthy. He's at school. Cubby is at school. Jack is asleep.

It is gloomy in the house, and it is pouring rain, but Sick Charlie never showed up this morning. Clouds with silver linings all over the place.
Posted by Kristin @ Going Country at 7:17 AM 1 comment:

Labels: all about me, Charlie, MiL, randomness

A Small but Significant Victory

Awhile ago at the library, Charlie chose this book called Look and Find Pooh. It's one of those Where's Waldo type of books with a million things on each page and you're supposed to find certain objects within the millions.

Those kinds of books kind of drive me nuts. Too much going on on each page. But then, I'm not three years old, and Charlie LOVES this book. It's the one he always chooses when it's his turn to choose a book.

So we've found all the things multiple times. Except the snail.

The snail is one of the things to look for on the "scary shadows" page, and I could not find it. Every single time we would look at this book, I would search and search, methodically moving left to right in small increments, looking in vain for that damned snail. Every time, I would fail to find it.

Also, incredibly annoying. It's a book for small children! I am an intelligent adult! WHY CAN'T I FIND THAT SNAIL?

Today I had the brilliant idea to look not for the snail, but for its scary shadow. Because almost all the shadows on that page are supposed to be cast by the objects to be found. So first I found a likely-looking shadow, then I searched around that until I found the snail. FINALLY. It was on top of this hanging bell bracket thing and looked just like a scroll on the bracket.

But I found it! HA HA, Look and Find Pooh! Victory is at last MINE.

I think I need to get out more.