My standards are slipping lately.  This is solely because I have not enough time or sleep and entirely too-awake children.  Charlie is still up every three or four hours at night.  Cubby is still resisting sleep both for naps and bedtime.  Sometimes he skips his nap.  Sometimes it takes an hour of drama to get him to sleep at night.  Sometimes I want to do a runner and not come back for a week or so.

But since that's not really an option, the following are a few things on which I have conceded defeat:

1) Bribery.  Specifically of the "Finish your dinner and you can have a ginger snap" variety.  This has been standard for parents for time immemorial, I know, but was never necessary before with Cubby.  Now?  Now I just want that kid to have some food in his stomach to stave off the "You're* hungry!" announcement during the bedtime battle.

2) Screen time.  Oh, how I hate that phrase.  You know what it means, right?  The hours of television or computer time a child has in a day.  I tried pretty hard to limit that for a really long time, and it's still quite limited, but now I am SO RELIEVED when Cubby consents to sit down and watch "Curious George" for half an hour.  Because that is a half hour in which I only have to deal with the baby and not baby+toddler.  And so I am grateful to that annoying little monkey cartoon for that half an hour.  Also, these DVDs my mom sent with episodes all about car wreckers and sawmills and other machine things are pretty much Cubby's favorite thing ever and THANK YOU, Nana, for the guaranteed distraction.

3) Disposable diapers. We never had to use these when Cubby was a baby, but for some reason, the only thing that usually keeps Charlie dry at night is a disposable diaper WITH a cloth diaper cover over the top. I tried every combination possible and everything else results in a soaking-wet and awake baby.  And I do not need that baby awake any more than he already is.  I hate having to pay for diapers and I hate having to take them to the dump, but I hate being awake all night even more.

5) Personal appearance.  As I was sitting on the couch last night with Charlie, listening to A. wage the Cubby bedtime battle upstairs, the MiL remarked that the soles of my feet--visible because I had my feet up on the coffee table--were looking pretty rough.  I had to laugh at that, because that is the LEAST of my concerns when it comes to my appearance.  My sartorial choices these days are based entirely on what is cool enough and easy to nurse in.  Which is why I am currently wearing one of A.'s shirts over a nursing tank top that is way past its prime.  It is not a good look, but I really don't care.

Sometimes good enough is all you can hope for.

* His pronouns are still hit or miss.
Posted by Kristin @ Going Country at 11:14 AM 5 comments:

He's Worse Than the Dogs

I was outside picking up bits and pieces of shingles this morning* while Cubby wandered around on the lawn  outside the kitchen door when I heard, "That's something gross."

These are not words you want to hear from the mouth of your two-year-old.  Especially when that two-year-old is coming towards you with something in his hands.  When he got close enough, I identified it.

It was a dead mouse with its head chewed off.

I immediately told him to drop it, of course.  Then I herded him inside to wash his hands, in the meantime explaining that it's really not a good idea to pick up dead animals with your hands.


And now, to get the image of a toddler running around with a headless mouse out of your head, I will leave you with this: 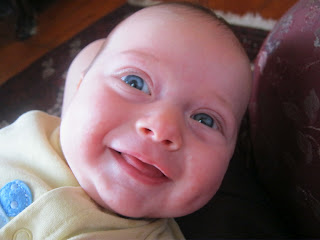 * Remnants of the roofing job that is THANK GOD FINALLY done.  Yay for A.!
Posted by Kristin @ Going Country at 10:07 AM 5 comments:

Know what's a most unpleasant way to start the day?  Catapulting out of bed from a sound sleep at 6 a.m. because of a pounding on the front door.  I nearly had a heart attack.

At least it was just a very nice lady informing me that the sheep had been by the road.  Better than an angry truck driver or something, anyway.  She was so nice that she said she had herded them ahead of her up the driveway with her car so they were by the house.  She was also incredibly chipper considering the early hour.

Probably because she hadn't had to get up four times the night before to feed a baby.

I rousted out the shepherd to round up the sheep.  Then Cubby came running into our bedroom, Charlie woke up, and the circus began again.

Good morning to all!
Posted by Kristin @ Going Country at 6:15 AM 1 comment:

Who, according to my mother, thinks that all Charlie does is sleep.  And based on the photos I post here, I can't blame her for thinking that.

Allow me to correct that misconception. 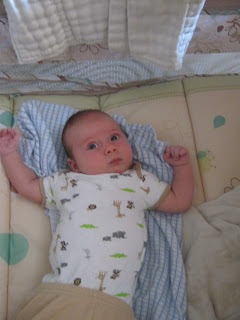 Sleep?  What? I'm wide awake and ready to rock! 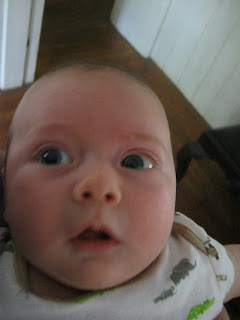 This is me rocking. 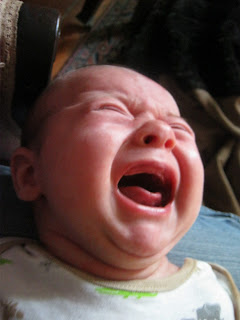 And this is me screaming.  Another fun alternative to sleep. 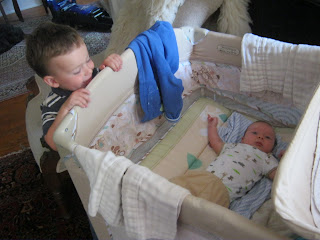 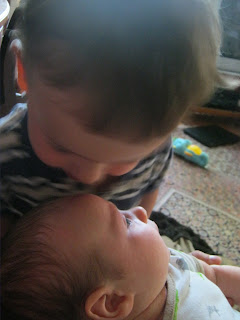 And will now proceed to snuffle his head and yell, "What's the matter, baby!" two centimeters from the quite-calm baby's eyes.

So you see, there's not as much sleeping going on around here as it might appear.  Just ask the black circles under my eyes.