A Short History of My Tomato Staking

What? That title didn't grab you? Don't you want to hear all about my various tomato staking methods over the years?

Oh good! I knew you did.

In my younger, more ambitious, and (most importantly) child-free years, I made some SERIOUS STAKING. Craziness with bamboo and sisal twine. It was really cool-looking and extremely effective for supporting the tomatoes. Win for me.

Then I had a baby. And there goes any time for constructing elaborate tomato scaffolding. I think one year I did a bamboo stake on either side of each plant. That worked okay.

Then there was last year. The Garden Year Which Will Live in Infamy. Last year in the garden sucked--thanks to Charlie's arrival in July--and the tomatoes were no exception. I was under no illusions that I would be properly staking any tomatoes last summer. I knew damn well I wasn't going to be tying up the plants when they needed it. So I had A. put in two posts at the end of each row of tomatoes with fencing in between the posts. The idea being I could maybe pull the plants through the fencing and support them at least a little that way.

That worked about as well as you might expect. That is, it didn't.

So now what? Thanks to a series of events that's too boring to go into here (WAY more boring than a detailed discussion of tomato staking, which I bet you didn't think was possible), I no longer have a large supply of bamboo stakes. But I still have 25 tomato plants. What to do?

Why, call on my own personal superhero of course: Woodchuck Man.

So he cut down some small locust trees and used his ax, wedges, and sledgehammer to split them into stakes. Which he then pounded into the ground next to the tomato plants, using the sledgehammer again. He tells me that all tomato stakes used to be split hardwood like that. He can't imagine why nobody does it anymore.

Would YOU do all of that? Nope, me neither. But I married someone who would, lucky me. And so now . . . 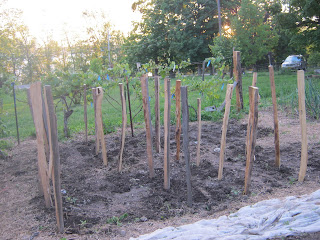 Locust wood pretty much never rots, so I can keep using these stakes for the rest of my gardening life. We have locust posts on this property that are at least fifty years old. So these stakes could last longer than I do.

Enough with the reflections of mortality courtesy of tomato stakes. Point is, the tomatoes are in, the stakes are in, and now the low temperatures just have to get the hell out of the thirties so those plants actually grow big enough to stake.

Labels: all about me, Blackrock, country livin', gardens, manual labor, the A team, The Tomato Crazy

A Public Service Announcement from Charlie 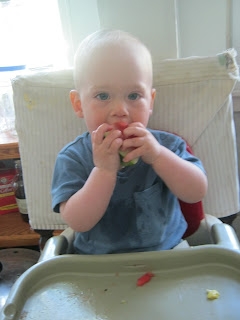 Feeling glum? Gnaw on a watermelon rind until your shirt is soaked. 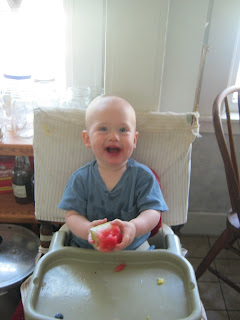 We've been losing hens lately to a fox. At least, we assume it's a fox. All I see in the morning is a big swath of loose feathers on the ground, but pretty much only a fox is smart enough to figure out that first thing in the morning the chickens are out, but the dogs are still shut up. Two hens have disappeared.

We haven't been shutting the door to the chicken coop at night, so that they can come out first thing in the morning, which is actually before we wake up. Obviously, I have to shut them in now.

So last night I went out to round up the chickens. I found two on the roof of the coop. Real smart, hens. I used a stick to prod them off the roof and into the coop. Not, of course, without some chasing of the one rebel hen around and around the coop a couple of times before she finally ran into the coop.

Penny is our old hen. We've had her about seven years now. She's taken to "roosting" at night on the ground behind the dog pen. Penny is about as far from aggressive as a hen can be. She's quite unlikely to peck or kick or flap or do anything else unpleasant when picked up.

But I still put on a coat to cover my arms and gloves to cover my hands before I picked her up. And that is because I have a quite irrational fear of being pecked.

Logically, I know that a peck from a hen isn't going to result in any serious damage. This is an animal I outweigh by over a hundred pounds. There's no reason to be afraid of it.

But I still cover up, because fears are often irrational. And that's why I was wearing a heavy winter coat and work gloves to carry a docile six-pound hen thirty yards to the chicken coop*.

Now it's your turn to confess: What fears do you have that you know are irrational but you just can't help?

* I was doing this in the lead-up to our third very violent thunderstorm yesterday, two of which featured some significant hail. We didn't sustain any notable damage--other than the fact that our gravel driveway essentially washed away--but not everyone in our area was so lucky.
Posted by Kristin @ Going Country at 6:40 AM 11 comments:

Summer is really for real on its way. It's way warmer! It's way lighter!

It's kind of a pain in the ass sometimes.

Cubby does not agree. He looks out the window and announces with ominous cheerfulness, "It's a nice sunny day outside!"

This is ominous because it is always, ALWAYS followed by, "Let's go out!"

If the kids have already had some breakfast and I've started the day's laundry and I have a cup of coffee in hand, I say yes and release Cubby into the great outdoors. Watching the kids outside wouldn't be such an effort for me if we had a nice suburban, fenced-in yard in which to contain them. But letting Cubby out the door at Blackrock is like releasing a caged wild bird: Off he flies, with me in pursuit.

Although he usually stays relatively close to the house, that's still a couple of acres on which he can roam. So I end up moving Charlie from lawn to driveway to porch to different lawn to patio, following Cubby.

But it is also better than sitting in the house all day watching Cubby get more and more irritable and more and more shrieky. So I guess if it's a choice between me conquering my lazy instincts or Cubby shrieking inside, I know the right choice here.

Yes, Cubby, we can go outside. As long I have my coffee.
Posted by Kristin @ Going Country at 6:47 AM 2 comments: