Ain't This a Kick in the Head


Spring on the Canadian border looks an awful lot like . . . winter. 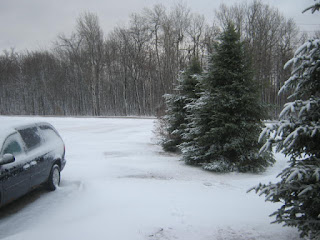 All you can do is laugh. Possibly until you cry.

Not to worry. Seventy degrees coming our way on Monday. Take that, stupid snow.


Charlie is supposed to go on a field trip today, for the very educational purpose of seeing the Smurfs movie at an actual movie theater. Since he's only been to a movie theater once in his life, he's very excited.

There might be a small problem, however, in that the movie theater is 40 miles away from the school, and it's supposed to dump snow and sleet most of the day.

Sucks being a country mouse in the North Country sometimes.

So we'll see if they actually get to go. If they do go, though, I feel like I should buy the teachers a drink at the end of the day. I mean, can you imagine sitting on a bus with 35 three- and four-year-olds for a total of almost two hours, and then sitting in a movie theater with them for another hour and a half? If anything deserves a bottle of alcohol, that would be it.

I don't know how much a preschool teacher makes, but it probably isn't nearly enough to compensate for that.
Posted by Kristin @ Going Country at 6:54 AM 1 comment:


Yes, that's beaver, not beef. And yes, that is what we had for dinner tonight.

Hold up, you say. Beaver? Who eats beaver?

Well, people that trap them, I guess.  Like A.

Long back story there, but the upshot of it is, A. caught a beaver in a trap yesterday and brought it home. 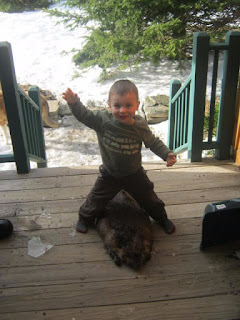 Don't worry, it was dead. We weren't trying to give Jack a ride on a live bucking beaver.

Now obviously, beaver hides are valuable, and that will certainly be saved, but what about the meat? Can you eat beaver?

I mean, you can eat anything, really, the question is, will you want to?

First Cubby requested that the tail be frozen for future roasting over a campfire, as described by Steven Rinella in his book Meat Eater. (Good book, by the way.)

Roger that. One beaver tail is now in the freezer with the raccoons*.

And what about the rest of the meat? Well, according to the all-knowing Internet, beaver meat is more or less interchangeable with beef.

I always have my doubts about those claims, but I was willing to try it. So A. cut off the front and back legs and the backstraps, and put them to soak in salt water last night.

This morning I dumped out the salt water, dried the pieces, browned them, and simmered them for several hours in a mixture of tomato juice, onions, and garlic.

When the meat was coming off the bone, A. stripped the meat off and we tasted it.

A. thought it tasted like a cross between beef and dark-meat chicken. I think it's more like the dark-meat chicken, but it's definitely not exactly either of those. It tastes like . . . well, like beaver.

Not bad, though. Certainly no gamier than venison.

I mixed the shredded meat and some of the tomato juice mixture with more onions, garlic, chili powder, and cumin and we ate it in some corn tortillas.

Everyone ate it and enjoyed it. Cubby and Charlie even gave it two thumbs up, and Cubby had two helpings.

So, can you eat beaver? Yup. You just might have some trouble procuring one . . .

* People have asked if we eat the raccoons, and the answer is, so far, no. I know you can, and people do, but I'm always a bit wary of eating something even the dogs won't touch. Maybe someday we'll try it, but I'm in no hurry.

Forget the Baby--Let's Talk About Fish


Do you know what yesterday was? Yes, April 1, which is popularly known as April Fool's Day. For A., however, April 1 means only one thing: Opening Day of Stream Fishing.

Better than Christmas, you know.

I am not exaggerating when I say that A. looks forward to the opening day of stream fishing starting about, oh, early December. Which happens to be when deer hunting season ends. There may be some desultory trapping and small game hunting in the winter, but nothing compares to the thrill of getting back out to fish the streams in the spring.

That's what he tells me, anyway. I must admit that I don't feel the thrill myself.

So A. loaded up Cubby and the fishing gear in a state of high anticipation yesterday morning, despite the fact that it had snowed six inches the night before and kept on snowing off and on all day.

The fisherfolk returned after only a couple of hours, which surprised me, because I was pretty sure A. would not give up until they caught something. And he didn't. Give up, that is. He did catch something.

A. came bounding up on the porch and ordered me to go get the camera. "I have to get the tape measure!" he said.

Okay. So that must have been a successful excursion.

Indeed it was. With the aid of the camera and the tape measure, we were able to document that A. caught a 24-inch brown trout. 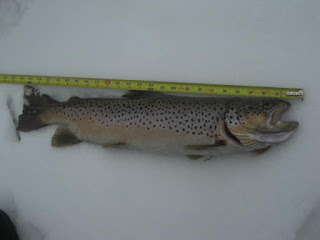 That is a damn big trout.

For those of you (me) who aren't sure how big a brown trout in a stream might usually get, let me just assure you that they very, very rarely get this big. This is by far the biggest fish A. has ever caught in a stream, and would probably have been big enough to earn him a New York Angler Achievement Award, had he brought it to the hardware store to get it officially weighed*.

He didn't do that, though, so he just has to be satisfied with the personal knowledge that he caught a giant fish.

A. was practically hysterical with excitement, which of course got the kids all worked up. 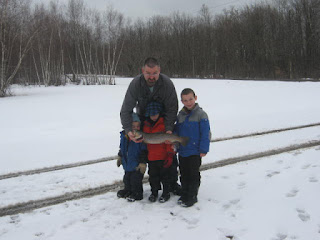 The fish was then borne inside with all due reverence to be gutted and cleaned at my kitchen sink. 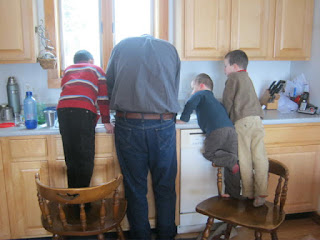 With a captivated audience to the bloody mess.

I overheard the following from my spot on the couch, out of view of the disgusting proceedings:

A.: Hey, cool! Some of the bugs in its stomach are still alive! Look, kids! See those hellgramites that are moving around?

Charlie: Can we save the hellgramites?

WHY MUST I BE A PARTY TO THE GROSSNESS. IN MY HOUSE.

The butchery thankfully ended shortly thereafter, and even more thankfully, the hellgramites didn't even make it to bedtime. I announced that they were dead at the bottom of the jar of water and therefore had to be dumped outside.

Anyway. That was a big-ass fish that A. is justifiably proud to have caught. And it has now all been recorded for posterity on the permanent record of the Internet.

* It would have been pretty funny to walk into the hardware store with an enormous slimy fish and ask to put it on their scales, though I'm sure it would hardly be the first time they've had that request at that particular rural hardware store.