Long version: I cooked the bull meat for this for almost 8 hours, and it wasn't too chewy. Certainly not falling apart, but not as tough as before.

I also added sauerkraut, carrots, and green beans to the goulash, turning it into more of a soup, I suppose, but I am all about one-bowl meals and not cooking a separate vegetable, so there you go.

Long version: This salad came entirely from the garden, which is pretty remarkable for mid-November. The lettuce was mostly Cubby's lettuce, which is in a sunnier spot than mine in the backyard. I did use some from my planting, though, which is also remarkable, because I didn't even cover it when we had the last cold snap. Which means that it survived 12 degrees without any protection.

The carrots survived, too, although they were covered. I dug up a few at the end of the row that I had never thinned, and they were like very, very small. Like mini baby carrots. Fine for a salad, though.

The tomatoes were from the boxes of green tomatoes that Charlie and Poppy helped me pick before the freeze a month ago. They've been slowly turning red ever since.

Long version: I was making bread again, so I made a pizza this time with some extra dough, rather than the usual garlic bread. I didn't have any asadero cheese, so I just used a mixture of store-brand "sharp" cheddar (more like medium cheddar), good extra sharp cheddar, and Parmesan. That, plus some bacon and Finny's sauce, was the pizza.

It was good, but because there was only one, it wasn't enough. Good thing A. fried the testicles from the lamb he killed on Friday! The kids don't mind the taste, but they're not huge fans of the squishy texture, so they each only ate one slice. And then they finished their meal off with some yogurt and maple syrup. Except Cubby, who had some walnuts.

I did not make a dessert, but the candy bowl is still well stocked from Halloween. It was fine.

Long version: Oh man, this was A DAY. I sprained my ankle in the morning right before work on the steps leading into our living room, so I was gimping around all day, and then my stomach started feeling less than stellar in the late afternoon.

I still made dinner, though. Albeit an easy dinner.

I ate some rice and declared myself done with the day. A. did all the dishes. Good man.

Long version: An even worse day, health-wise. I spent the day napping every few hours, in between helping A. butcher the ram and watching Poppy.

In truth, A. did almost all the cutting of the meat, and I just labeled the bags and got everything in the freezer.  And cleaned up.

Poppy helped us cut up the backstrap: 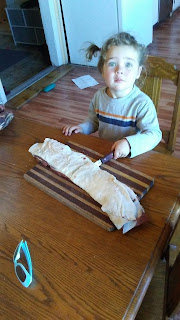 It was surprising to everyone.

Though really, she mostly watched quite a bit of Berenstain Bears on YouTube.

Whatever. I got through the day, and even made dinner.

The lamb was the backstrap of the ram, which I marinated in red wine, olive oil, garlic powder, and salt, then fried in its own fat. I made a sauce for it with more red wine and the very last cube of garlic scape pesto. Tasty.

Long version: I was feeling better and went to work, but was pretty tired by the time I got home. I hadn't cooked all of the piece of lamb backstrap the day before, so I made the last of that. Plus the leftovers.

Long version: The only thing I made for this dinner was the pasta, which was just pasta, some of Finny's sauce I already had in the refrigerator, some sneaky pureed squash I put in there, and asadero cheese. The kids ate that, plus salad.

This was the first salad in many months that was made of store-bought lettuce. The end of an era.

A. had the leftover lamb with Finny's sauce and asadero, plus a potato I nuked, and some leftover peas.

I had a salad with salami, Parmesan, leftover peas, and the leftover tomato salad. It tasted like an antipasto salad. That is, good.

Tuesday Tips: A Gift for You

As some of you may have figured out by now, I am not a recipe person. To a rather ridiculous degree, actually. I don't follow them (certainly not well . . .). I don't write them. I am just not into recipes.

But I have a recipe for you today. Because as far as I can tell, there is nothing like this on the entire Internet, and that must be remedied.

It's a recipe for spiced nuts that I made up several months ago and have been making ever since. It started because my mother gave me a five-pound bag of raw almonds, and I wasn't sure what to do with them. I mean, roast them, of course, because almost all nuts are better roasted. And all nuts are better with seasonings.

But when I went searching on the all-knowing Internet for spiced almond recipes, what I found mostly fell into two categories: sweet, or spicy-hot.

I like cinnamon-sugar roasted nuts as well as the next person, but I wasn't looking to keep something covered in sugar around as a snack in my pantry. I also wasn't looking for anything that would burn my sensitive mouth, or my children's.

So I used the general method and made up my own recipe, with a spice mixture consisting of only salt, paprika, and garlic powder. The resulting nuts are delicious on their own, but when they're eaten with sharp cheddar cheese--I prefer to take a bite of cheese, then a few nuts--they taste surprisingly like nacho cheese flavored Doritos.

I can't explain this, but I know I like it.

I kept thinking I should actually measure ingredients and time baking and all that jazz so I could share these with you, and now seemed like a good time, what with the holidays coming up. These are, in my opinion, an excellent option for gift-giving. (Assuming, of course, that you know the recipient isn't allergic to tree nuts. But you're all intelligent enough to know that without my admonitions.)

I mean, they're tasty, convenient, portable, shelf-stable, and not filled with sugar, which I think we all get enough of this time of year. Is there a better gift for those random people you don't know well enough to buy a gift for, but feel like they deserve something? Nope.

1.5-2 teaspoons regular ol' table salt (I like mine pretty salty, so I use the larger amount, but if you're not into a lot of salt, you will obviously use less)

Dump your raw almonds in a pile directly on a half-sheet baking pan. You do not need to line the pan, oil it, or anything else.

Beat your egg white in a small bowl with a fork for one minute. It will be frothy.

Dump the egg white on top of your pile of almonds and mix it around with your hands until the almonds are all coated.

Sprinkle on the salt, garlic powder, and paprika, then mix with your hands again until all the spices are evenly distributed. Spread the almonds out into one layer in the pan.

Bake in a 325 degree oven. After about ten minutes, use a spatula to stir the almonds around and loosen them from the bottom of the pan. They'll be a bit stuck, but you won't have to pry them up or anything.

Bake fifteen more minutes (for a total baking time of 25 minutes), then remove from the oven and let the almonds cool on the pan.

When they're cool, put them in a jar with a screw-on lid.

And look, I even took a picture of the finished product for you. 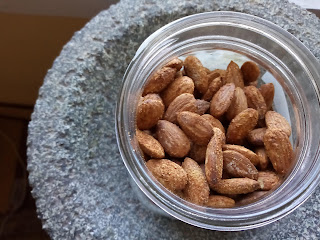 I probably should have had them artfully strewn across a decorative platter, but . . . no. Here they are in the jar, because that's what they look like in my kitchen.
Now go forth and roast some nuts. You won't be sorry.
Posted by Kristin @ Going Country at 4:35 AM 5 comments:

Although I don't consider myself an expert on anything in particular, I do seem to get asked for advice quite frequently.

Not, like, relationship advice or anything, but practical advice. One time when we were living at Blackrock, my brother called me to ask if hens would lay eggs without a rooster around*. My brother was wandering around somewhere with his friend and they disagreed on this point, so naturally, the first person he thought to call and ask (this was before smart phones) was his crazy rural sister who had chickens.

I get asked a LOT how I make bread, which I already covered here in great detail. Or yogurt. Lots of kitchen questions, unsurprisingly.

Anyway, what I'm getting at here is that I am going to share my hard-earned knowledge and wisdom here, with you, every Tuesday.

Why Tuesday? Because I love alliteration and decided to call it "Tuesday Tips." As good a reason as any, I suppose.

Also, if I know I'm scheduled to do it every week, I'm much more likely to do it at all. As evidenced by the 139 weeks straight of Fridays that I've been cataloging our dinners in the Friday Food posts.

We're starting off with a surprising bang tomorrow with an actual, written-out recipe. With measurements and everything! You all know I don't really DO recipes, but I wrote one out just for you. Get excited.

* No, the rooster has nothing to do with egg production. Just with the fertilizing of said eggs.