This evening I gave the boys their usual reminder to go to the bathroom and wash their hands while I was dishing up dinner. And then I hear from the bathroom, "Mommy? You should come see this."

That never means anything good coming from a bathroom.

Sure enough, the recent tummy troubles are still affecting one of my children, and the resulting mess was quite spectacular. His clothes, the floor, inside and outside of the toilet, side of the bathtub . . .

Perhaps the child in question said it best, "It was like a poop gun!"

Yeah. And it was the messiest shot in the east.

Needless to say, dinner was a bit delayed. I can't say I worked up much of an appetite cleaning the bathroom while the soiled boy had a bath.

I just kept reminding myself, "These are the best years of my life." If not the best ten minutes.
Posted by Kristin @ Going Country at 5:44 PM 6 comments:

Friday Food: Ribeye Is the Alpha and the Omega


My cooking started out pretty lame this week, but it got better. Sort of.

Long version: You know when you intend to make mashed potatoes but then after the potato pieces are boiled you lose the will to do the actual mashing and instead just throw some butter and salt on top of the unmashed pieces and call it good? No? Just me? Okay then.

I cooked some shredded carrots, sliced onion, and diced celery in the pan after the steaks were done, because that was all that I could eat. I didn't actually get to the grocery store that day. Story of my life. 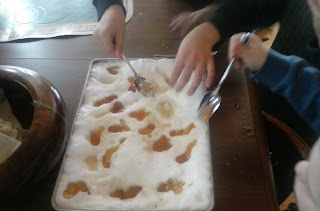 This was also the day we made maple candy in snow, but it's not in the dinner menu because we did it at 10:45 a.m. (It's delicious.)

Long version: I made it to grocery store! Hooray! So what did I choose for a vegetable with the world at my fingertips (or rather, the limited produce selection in the small village at my fingertips)? Yes, frozen peas. My stomach was feeling a little off. It was a day for frozen peas.

I did, however, have sweet potatoes once again, which was unreasonably exciting for me. Also lucky, as I was not feeling the greatest and pretty much just ate roasted sweet potatoes for dinner.

I bought chicken again because although I really do not like it, the children are always so touchingly happy when we have it for dinner. Particularly when they can each have a drumstick, which is why I bought legs this time and broke them down into thighs and drumsticks. Twisting chicken joints apart is gross.

I just roasted them with garlic powder, salt, and basil on top while the sweet potatoes were roasting. Then I poured some of the chicken juices from the pan in with leftover white potatoes and heated those up for everyone else.

Half-assed, to say the least, but on days when the cook is feeling queasy, it's a victory to have cooked food at all.

Long version: We have a couple of packages of ribs left from last year's rams. A. is the designated rib cook in our house, and he prefers to cook the ribs at least partially on the grill. It was 54 degrees Sunday, so I took a package of ribs out for dinner. A. marinated them in olive oil, garlic, and lots of apple cider vinegar, then covered them and cooked them in a low oven for a couple of hours. He finishes them on the grill to get rid of some of the fat and crisp them up.

Both things were accomplished when the grill caught fire.

I guess enough fat rendered out to cause not only a flare-up, but a straight fire in the area under the grill that catches the grease. A. rescued the ribs, but the fire continued to burn for several minutes even with applications of both baking soda and salt.

The smallest piece of ribs was pretty much incinerated, but the other two pieces were okay.

This is why the steak--the one left that wouldn't fit in the pan on Friday night--was pan-fried instead of cooked on the grill as I had planned. It did result in a pan to cook the mushrooms in, though, so I guess that's the silver lining.

I had some random tomato juice left from draining a can of whole tomatoes, so I added it to some diced onions cooked in olive oil and cooked the rice in that.

The salad was sad because all I could get at the grocery store was iceberg lettuce. They had romaine lettuce, but apparently that's once again on the naughty list. I cannot tell you how happy I will be when I can grow my own lettuce again. This agri-business lettuce is bad news.

All in all, it was kind of disappointing meal that resulted in far too many dishes.

Long version: I added some cheese when I heated up the tomato-y rice. I expect my Michelin star any day now.

The mediocre sustenance was mine. I had half a can of tuna mixed with leftover curried vegetables and rice. I don't much like canned tuna, but it was edible. Which is pretty much all I can say about my meals these days.

Long version: Hey look! I finally managed to make a real meal! Big pat on the back to me!

I did make just boiled potatoes on purpose this time, as opposed to intending but failing to mash them. All the boys have been complaining of tummy troubles this week, so I figured plain potatoes with a little butter would be a little easier on their digestion than mashed potatoes loaded with dairy.

I usually make a sauce for London broil, but instead I just seared it and took it out of the pan to slice, cooked the mushrooms and shallots in the pan, added back the sliced meat and put in a little red wine vinegar. It was surprisingly flavorful all on its own this way. Bonus.

I ate everything except the potatoes with the depressingly anemic iceberg lettuce as a salad.

Long version: So I brown the pork chops on the stove, then put them on a pan in the oven to cook, then put sliced onion in the pork chop pan . . . Wait, have you heard this before? Yeah. You know this drill.

I hope if you've learned anything from my (overly) detailed explanation of how I cook, it's that you should always make something else in a pan that already has grease and flavor in it. No sense wasting it.

I cooked the rice in chicken stock I had made from the leftover chicken bones on Saturday. This was the second pot of rice I made this day, because the boys were STILL having digestive issues and rice is a pretty safe food for that. The chicken broth makes it tasty without having to add a ton of butter. So we ate something like six cups of cooked rice in one day. Impressive.

Long version: Yup, ending as we began--with ribeyes. I couldn't possibly have anything else to say about ribeye steaks, could I?

This time I cut a chunk of fat off one of the steaks and used it to grease the grill pan before I put the steaks on. It made me feel very pioneer-y. I'm sure the women on the westward journey would have been impressed.

And this time, I actually had steak sauce. It's one of those things I always forget to buy at the store, and then we have steaks but no steak sauce. This disappoints A. every time. I've made homemade steak sauce before, but it's a Heinz 57 copy cat and we prefer A1. And I had it this time! Gold star for me.

I had a couple of partial jars of leftover canned tomatoes and tomato sauce in the refrigerator that really needed to be used up, which meant it was my pasta-loving children's lucky day.

I had a salad. Please read that with the appropriate self-pitying tone. I mean, it was a good salad, but it sure wasn't pasta.


Cubby and Charlie have a particularly late spring break this year. Perhaps the administration at their school was delaying in the hopes that there might be some actual spring weather for the break. If that is the case, they succeeded.

Behold, many pictures of my children outside. In short sleeves. It's a springtime miracle. 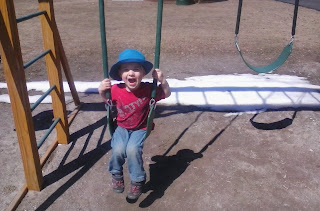 Although, yes, that is snow behind Jack. It is still the north country, after all. 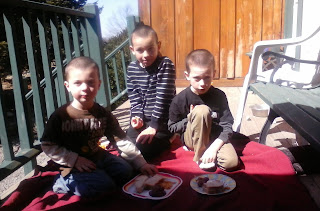 Overheard during this porch picnic from Cubby: "Now this is what I call living." I hope he's always so easy to please. 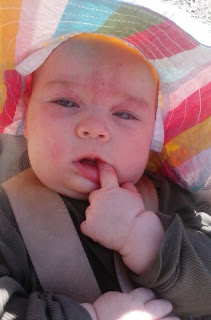 Poppy is withholding judgment on her voluminous sunhat. The finger's pretty good, though. 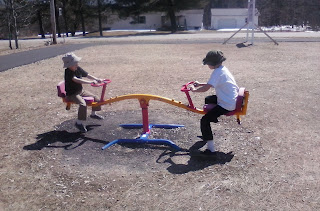 Tiny retirees on the teeter totter. Someone get these kids a stylist. 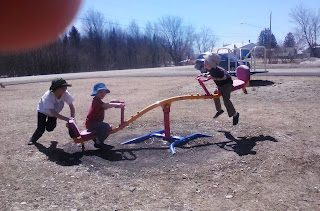 Please just ignore my finger in the corner and instead marvel at the sheer energy displayed in this picture. And then imagine that energy in real life, all day, every day. That's life with lots of little boys. 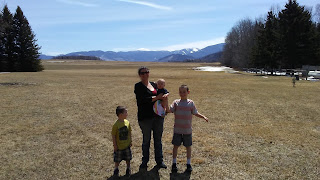 The way I'm standing makes this the least flattering photo of me ever taken, but I'm posting it anyway because the mountains (we went to the Adirondacks today) are so pretty. And I need to get over myself.

It's supposed to start raining tonight and continue for most of the rest of the week, but at least we got a little bit of real spring during spring break. We'll take it.