Things Are Looking Up

After a rough start to the day because of Cubby's insistence on eating at all hours after midnight and then getting up for the day at 5:45 this morning, I was not feeling particularly optimistic about the day ahead.
Feeling like shit will do that to a person.
But then, after finally getting Cubby down for his post-wakeup nap, I went downstairs and found that A. had made the coffee, the MiL was in the midst of blueberry pancake preparation, and there was a MASSIVE rice pudding in the refrigerator that the MiL made last night.
Maybe food isn't supposed to be a cure-all, but sometimes, it's enough. And family is pretty awesome, too.
Posted by Kristin @ Going Country at 6:03 AM 5 comments:

Labels: all about me, baby stuff, Cubby, family, MiL, the A team 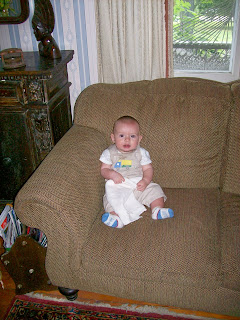 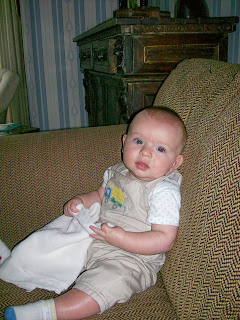 Yeah, I sit up now. Because only BABIES can't sit. I keep telling them I'm not a baby. 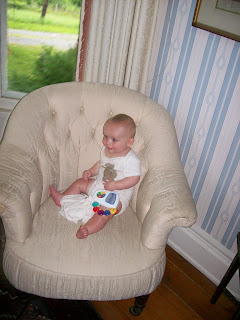 I mean, okay, I can't sit without support yet. And yeah, I still enjoy sucking on my fists and staring mesmerized at the bright lights and tinkly music from my Baby Einstein toy. But me? A baby? Please. 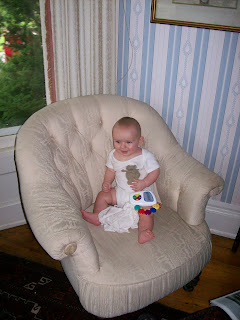 I prefer to be referred to as a Recently Arrived Person. 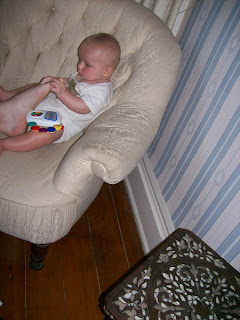 I used to be a morning shower person. As most people are, I think, because you have to make yourself presentable before another challenging and rewarding day sitting at a desk. But I no longer sit at a desk all day, and this means that my shower routines have changed. They have become, like so much else in my life, seasonal.

In the winter, I still try to shower in the morning so that there's no chance of my hair being wet when I go to the unheated bedroom to sleep. Wouldn't want my hair to freeze to the wall, would I?

How I wish that were a joke.

But in the summer . . . well, in the summer I just shower when all my work is done. Since all my work--housework, outside labor, and Cubby-wrangling--is guaranteed to make me sweat when it's hot and humid*, there's really no point in trying to clean up until I'm done for the day. I used to do all my work in the morning, and then I'd shower around lunchtime. But now, as I have mentioned before, I have to do a lot of my outside work when Cubby is asleep. So I don't shower until right before bed.

This means that I spend the day in a continual descent into grossness, but OH the sweet relief of a shower after a long, hot, sticky day. It's a nice way to end the day, getting clean and cool (well, cooler) for bed.

So what about you poppets: Morning or night bather?

* As it has been all summer long and is right now--90 degrees in the bedroom when I went to bed last night, according to the handy thermometer. Cozy.
Posted by Kristin @ Going Country at 5:44 AM 9 comments:

Ladies and gentleman, I am pleased to inform you that Chickie is definitely of the female persuasion. Yay more eggs! And yay not having to behead the only chick to be born this year! 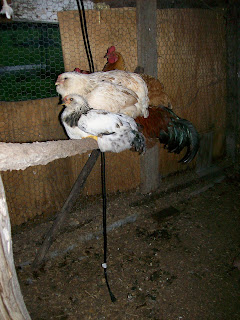 A horrible photo of Chickie (the bright white one closest to the camera), because the only time I can get close enough to get a good picture is when they're on their nighttime roost. But at least I GOT one, after meaning to take one for weeks.
Chickie has also been given a new name. By me, because I'm selfish with the naming thing. Her new name is Opie. Short for Opium. Because she's Poppy's chick. Geddit? Poppy? Opium?

I know. My wit astounds even me.

We still mostly call her Chickie, though. I don't care what she's called, however, as long as she starts laying some eggs for me next year.

The Stench of Death

What's the only thing worse than descending into the cistern in The Pit of Despair in order to find whatever it was that died and started scenting the dining room with the distinctive smell of rotting flesh? Not finding it and coming to the conclusion that whatever it was died in an inaccessible place.

It's going to be a very appetizing few weeks in the dining room.

It occurred to me the other day that I haven't posted a picture of the garden all summer. I KNOW. What have I been thinking? I'm sure you're all sitting at your computers every day, bitching about how there have been no photos of my tomatoes this year. SHOCKING.

I will remedy this grievous oversight today. You're welcome! 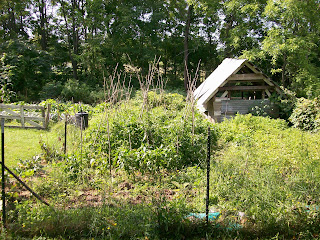 Potato jungle on the right, peppers and eggplants in the left foreground, the tomato forest in the back left . . . and weeds. WEEDS EVERYWHERE. 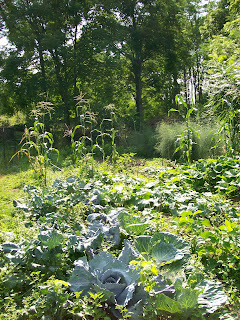 Sad and pathetic corn in the background, cabbages and broccoli in the foreground, various cucumbers and squashes all over the damn place . . . and HOLY GOD THE WEEDS WILL DESTROY US ALL. 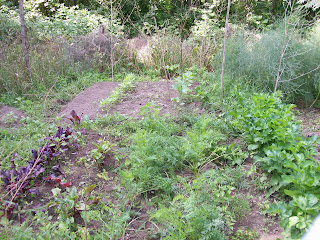 A new bed the MiL dug for more cucumbers and collards in the background, beets, carrots, and parsnips in the foreground . . . and what's that? Well, I never! IT'S MORE WRETCHED WEEDS.

There! Now that I have thoroughly depressed myself by viewing the state of my garden in photographic form, I'll be going. Happy Monday, poppets!

Labels: all about me, confessions, country livin', gardens

Just another routine chore, shutting in the chickens for the night and checking for eggs in the nesting box . . . Except all was not as it should be in the chicken coop last night, for Penny the hen had managed to get her fool self wedged in between the chicken wire and the outside plywood wall. There's about a four-inch gap at the bottom of the plywood, which I assume is how she got in her predicament to begin with. She must've managed some pretty impressive chicken contortions to do so, but there she was: Stuck and no way to free herself.

So I ran back to the house, searching through the shop for one of the three wire snipping tools we own. And of course, I couldn't find any of them. I eventually found a sort-of useful pair of pliers that sort of snipped the wire, with much effort and twisting and swearing. Meanwhile, Penny was flapping uselessly and squawking her head off, with the rest of the chickens joining in from their nighttime perch.

Four squawking chickens are surprisingly loud in an enclosed space. Plus, I was sure the rooster was going to hop down from the perch at any time and spur me for threatening one of his girlfriends. It was not a pleasant scene in there, is what I'm getting at.

Eventually, I gave up on snipping the chicken wire and instead ripped out the nails securing it to the plywood with brute force, thereby freeing idiotic Penny. She ran immediately to the food dispenser, leading me to believe she had been trapped for some time. The other chickens got off their roost to investigate and I beat a quick retreat from the coop, clutching the egg I went in there to get in the first place.

At least it's never dull around here.
Posted by Kristin @ Going Country at 6:43 AM 4 comments: