Waiting on the Green

But the snowdrops are finally up, which is the first harbinger of the growing season. Before you know it, the view from our front porch will look like this: 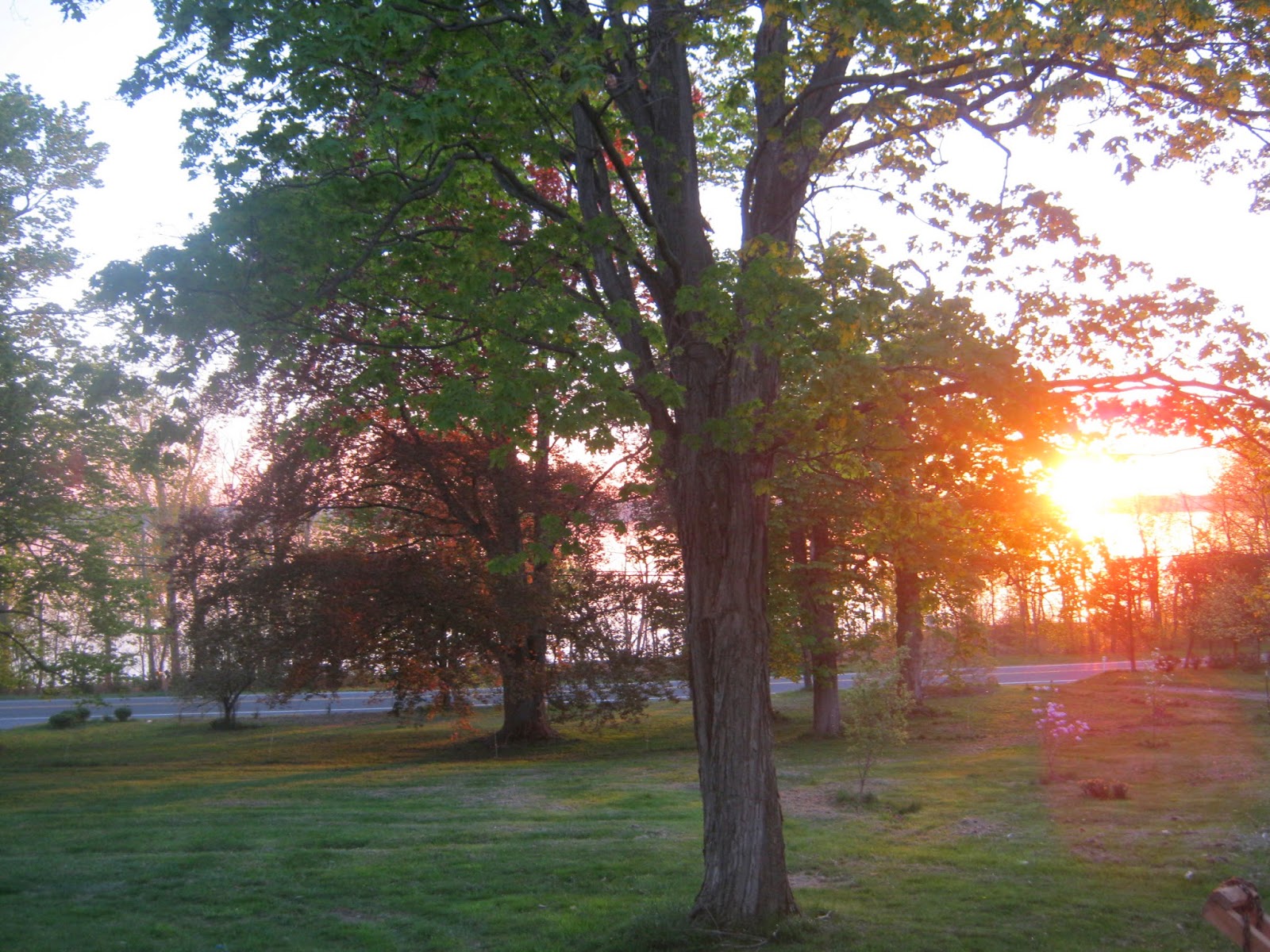 That photo was taken on May 10 last year. I think I took it to try to capture a very nice sunset. The sunset didn't come through particularly well, but the not-brown part sure did. We're going to be a little behind this year when it comes to the grass growing and the trees leafing out, so maybe it won't look exactly like that in five weeks, but soon.

These are the images we cling to in upstate New York's early spring.
Posted by Kristin @ Going Country at 4:43 AM 1 comment:

Spring is really coming now*. I know this because I raked the leaves off the magnolia bed by the dining room door so the small shoots of crocuses can get some sun.

Also, I spent some time cleaning up the front porch, which is currently home to A.'s camping pack, many traps, a bunch of mostly broken fishing poles, and some other miscellaneous crap.

But at least now it's not also covered with loose hay from when A. had bales of hay there to store out of the snow. A small but important improvement.

On Monday it's supposed to be sunny and something like 55 degrees. I have big plans to hand wash my wool sweaters and lay them outside to dry.

So what about you, my lovelies? What are some of your spring rituals?

* Yes, I know it's already spring according to the calendar. The calendar can go to . . . well. It's spring when it feels like spring, and this year, March was not spring-like at all. So there.
Posted by Kristin @ Going Country at 4:08 PM 7 comments:

Labels: all about me, Audience Participation Days, domesticity, randomness, weather

Food Is the Tenuous Thread Here

A random collection of thoughts that are only connected via my stomach:

What is it about frozen vegetables that are so appealing to children? Cubby and Charlie ate about a cup of frozen peas this afternoon while I was making dinner. Frozen green beans are also a favorite. I remember loving frozen corn when I was a kid, and I know one family with small children who eat enough frozen vegetables that they just call it "frozen salad," so I know it's not just my kids.

Whatever. Works for me: non-messy, healthy, and keeps 'em quiet for five minutes. Who could ask for anything more.

I made up a meatloaf recipe a little while ago in an attempt to palatably use the breakfast sausage we got with our pig, which was way, WAY over-salted. It was too salty to eat on its own. I mixed it with some ground beef and onions, plus rice and eggs to stick it all together, topped it with apple chutney and ta da! Sausage loaf. Sounds gross, but isn't. In fact, it was good enough that I made it again tonight, except this time I topped it with some of the leftover cranberry sauce from Sunday's dinner. Once again, sounds gross, but isn't.

Since I already had the sausage loaf in the oven and I hate to use the oven for a single thing, I also decided to make this recipe for roasted rhubarb and strawberries. We have two big bags of rhubarb chunks the MiL froze last spring, and here we are staring down another rhubarb season with way too much rhubarb still in the freezer.

I don't know what kind of fruit the people that developed that recipe were using--to say nothing of the many commenters who raved about it--but half a cup of sweetener for five cups of rhubarb and strawberries, plus vinegar? Ain't no way that's edible. I added more sugar as it was cooking, then dumped on another tablespoon or so right on top of each serving as I was dishing it out. It was good, as any combination of rhubarb and strawberries can be, but only with enough sugar. In fact, it would have been better with vanilla ice cream, instead of the plain cream we had, because it could have used even more sugar than I put on it.

And, uh, I think that's it. What'd you have for dinner tonight*, duckies?

* No, really--I want to know. You know how you sometimes see snide remarks about people who post Instagram photos or tweets about their meals and people are all, "Who CARES what you're eating?" I do. I am a food voyeur and I love to see what other people eat. This might mean I'm weird. I'm okay with that.
Posted by Kristin @ Going Country at 6:27 PM 6 comments:

Labels: all about me, domesticity, fun with food

It looks like there will be no maple syrup produced at Blackrock this year. Mr. Jason put in about 75 spiles at his property and has been waiting and waiting for the sap to run.

Okay, so it ran a little bit, but not enough to haul the sap out here and spend a day cozied up to the evaporator. It's not looking like sap weather this week, either, and after that . . . well, April 1 is the opening day for stream fishing here. And there is nothing that gets in the way of Mr. Jason fishing.

Making maple syrup is fun, but it's not as if anyone is going to starve if it doesn't happen. So the terrible season thus far has closed the sugarbush here at Blackrock for the year.

Luckily, we can buy maple syrup by the gallon from nearby producers, so we won't have to do without.

Good thing. A house without maple syrup is a sad place indeed.

Cubby is outside with A., using a stick to dig around in the half-frozen dirt in a planter near the door. A. has been splitting wood--stopping occasionally to cough because he's still dealing with the dregs of the interminable cold--and will be splitting wood forever and ever because this is the winter that never ends.

Charlie is wandering around with an apple and an old baby bottle filled with water. The bottle amuses me, because he never used one when he was a baby, so he doesn't really get the whole concept of the nipple part.

The MiL is in the kitchen simmering cranberries for some kind of chicken with cranberries and mushrooms recipe she found and wanted to try. Should be interesting.

As for me . . . I picked up the incredible accumulation of detritus downstairs and dusted today, and then managed to get the stairs and the upstairs vacuumed, so things are looking up. I'm also very much looking forward to the bottle of wine in the refrigerator that I plan to deplete later this evening.

Looking up, indeed. Way up.