Bring on the Berries

Picking strawberries with your child sounds like such a wholesome--dare I say idyllic?--thing to do, doesn't it?  Yes.  But "picking" is really just a euphemism for "eating." 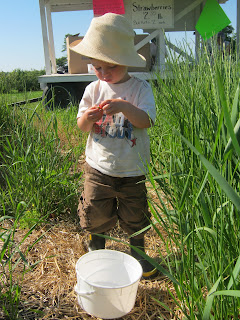 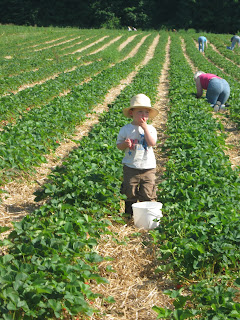 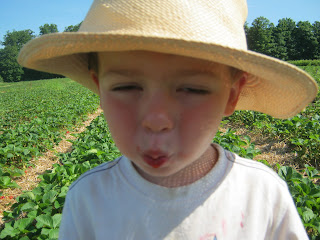 We went with the MiL because I figured that way at least one of us would actually pick in a somewhat efficient manner.  I had no illusions that Cubby would help at all.  In fact, I assumed I would spend most of the time chasing him up and down the rows.

I filled one bucket, though I picked a lot more than that because about every other berry went into that boy's gaping strawberry-smeared maw.  The MiL picked three buckets full.  She froze some last night and made a batch of strawberry jam.

I made strawberry-rhubarb jam today with some more of the berries.  Cubby helped. 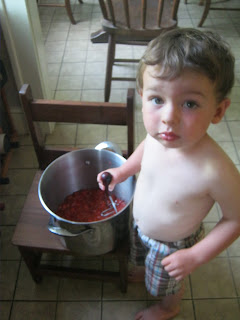 Mashing is an excellent activity for a toddler, provided you have a really big pot to contain the enthusiastic splashing that will ensue.

Shortly after this I kicked him out of the kitchen and enlisted A. to watch him so I could do the boiling of jam and filling of jars for canning without a small child under my feet.  Safer for all that way.

I canned five pints of jam.  It is entirely possible this will be the only canning I will do this year.  Maybe I can get Cubby to do it instead.
Posted by Kristin @ Going Country at 5:57 PM 2 comments:

It's the final countdown.*  As of today, I am exactly one month from my official due date.

Let that one sink in for a minute, if you will.

Of course, if this child is anything like his older brother, he won't wait for official, but will instead make his entrance any time he damn well pleases.  In Cubby's case, that was almost two weeks before his actual due date.  So really, we're on red alert right now at all times.

I would not be sad if this child came early.  I only have two things left on my mental to-do list (in case you're interested: purging the current child's overflowing bookshelf downstairs and sending my sister-in-law the gifts for her coming baby, due a month after mine).  I even managed to clean out the enormous toy box yesterday, which, believe it or not, was actually full.  Of course, the reason I cleaned it out was because Cubby was searching for one particular small Lego piece that had fallen to the very bottom and so everything was thrown out anyway in search of the elusive helicopter blade piece.  So I figured I might as well just do the sorting and full-on clean-out.

Now there's some space for the deluge of toys sure to come for the next kid.  He will not be getting his own toy box, so this will just have to be a lesson in sharing and caring (or, let's be real, jealously guarding and fighting) between brothers.

In other baby news, there will be no photos of the new chicks in the near future, for one simple reason: I can't get close enough to them.  They range in a very large area with their mother, who sticks to brushy areas and is as flighty as . . . well, as a semi-wild hen with new chicks.  So photos are a no-go.  Sorry, duckies.  Them's the breaks.

* I really hope you watch that video, if only to marvel at the spectacular effect of male perms and eye makeup.  Men can be just as pretty as women, if only they're willing to work for it.
Posted by Kristin @ Going Country at 4:04 AM 6 comments:

Labels: all about me, baby stuff, chickens

Just now as I was standing over the sink eating an enormous slice of watermelon, it occurred to me that I have a somewhat unusual method of disposing of the seeds.  I don't spit them out.  Instead, I flick them out with my finger before I even take a bite.  And the reason I do this is because I am a lazy eater*.

I prefer to have my food ready to chew easily and swallow on immediate contact with my mouth.  This is why I don't enjoy foods like ribs, which require an awful lot of chewing and picking around cartilage and whatever before the actual meat can be consumed.  I used to always carefully trim all meat of excess fat and then cut it into bite-sized pieces before I even commenced eating.  I don't do this much anymore, mostly because food in smaller pieces gets colder a lot faster than larger pieces, a consideration in our cold-ass house.  But it's still how I prefer to eat.

So what about you, poppets?  Do you enjoy challenging foods, or would you rather consume foods that require no effort?

Mulberries, Scapes, and a Surprise

Yes, it is indeed Mulberry Time at Blackrock once again.  Unfortunately, this year I am doing exactly nothing with the mulberries.

I KNOW.  THE SADNESS.

I just . . . I can't.  I can't deal with the tarp and the beating of the tree; I can't bend over to pick them up; I can't spend hours making juice and canning it.  It is not happening this year.  Blame it all on the coming boy-child and the crippling effect he is having on me.

But the current boy-child!  My my, does he love those mulberries.  He had his first mulberry encounter a couple of days ago, when we randomly went into the ram pasture while A. was pulling out stones from there for another stone wall he was building elsewhere, and when I discovered the mulberries were just starting to get ripe and fall off the tree, that pretty much ensured Cubby's entertainment for the next half hour.

He has quickly learned to eat the dark ones ("That one's too red!" he announces, before throwing it far away), to avoid the ones that are close to the sheep shit that inevitably accumulates under the tree, and to beat the tree with sticks to make the berries fall down.

Does it get any better for a two-year-old?  Maybe next year he can do all the work for me.

Mulberry Time always coincides with garlic scapes.  I snapped off all the scapes this afternoon and sauteed them in bacon fat for dinner.  Man, do I love sauteed garlic scapes.

And now, the surprise!

While Cubby and I were visiting the mulberry tree today for snacktime, I spied one of the hens wandering around in the hollow down there.  And . . . what's that moving behind her?  ARE THOSE CHICKS?!

Why yes, yes they were.  This was the hen that went missing a couple of weeks ago.  We knew she was gone.  We were hoping she had stolen away to sit on a nest somewhere and hadn't just become hawk bait or something.  And there she was.  Foraging quite capably, with two small chicks hopping in her wake.  Now we need to integrate her back into the flock, because those two chicks won't last long free-ranging with their mom like that.  And then we wait to see if we have more egg-producers or . . . chicken dinners.

Either way, a nice surprise for a random Tuesday.
Posted by Kristin @ Going Country at 6:07 PM 5 comments:

Well, hi there!  How are you today?  Cheerful?  Glum?  Sweating incessantly and anticipating a night of very little sleep thanks to the stifling humidity?

Yeah, that last one may just be me.

But!  Lest you think this is going to be yet ANOTHER opportunity for me to bitch and moan about heat and humidity and this totally unfair upstate New York weather that freezes our asses half the year and then tries to melt us into puddles of misery for a couple of more months in the summer . . .

Oh wait.  Looks like I just did the whining part.

What I was actually going to say is that one thing I really love about hot weather is how easy it is to get Cubby dressed.  Underwear, shorts, t-shirt, done.  Compare that to getting him ready to go in the winter, which required underwear, long underwear, long-sleeved t-shirt, flannel shirt, wool sweater, wool socks, and wool slippers.  To go outside meant wrestling him into a snowsuit, boots, mittens, and a hat.  I never failed to remember the scene in A Christmas Story when the mom is trying to force Randy into his Michelin Man snowsuit.

Going outside these days means I make sure Cubby has on sunscreen and some kind of footwear.  Sometimes I even let him go barefoot, if I'm feeling lazy (always) and bathtime is approaching.

And there you have it.  The silver lining to the heat.  I knew it had to be in there somewhere.
Posted by Kristin @ Going Country at 6:25 PM 3 comments: