Hello from Tucson, my lovelies!  You'll never guess what I'm wearing right now.  (Don't be dirty.)  I'm wearing a skirt.  And short sleeves.  And no shoes.  What sort of alien land is this?

Oh. Right.  The desert in, ahem, "winter."  No wonder so many damn people have moved here.

So I did indeed survive my long trek yesterday intact.  In fact, it all went quite smoothly.  I must give props to the good people at Continental Airlines, who took care of a couple of things that could have really screwed up the trip with efficiency and a good attitude.  Well done, Continental.

I had a brief moment of melancholy at 7 p.m. Blackrock time as I was watching Houston recede into the distance and thinking about Cubby going to bed without his mother.  Sniff.  But he's doing just fine, according to his father, and they have many exciting adventures to come in the following days.

As do I.  Exciting adventures that include going barefoot.  It doesn't take much, obviously.
Posted by Kristin @ Going Country at 6:23 AM 5 comments:

It is currently 13 degrees with snow on the ground and more on the way at Blackrock.  In Tucson?  Currently 44 degrees, no snow, none predicted, and a high of 78 degrees today with bright sunshine.

January is an excellent time to go to Arizona.

Just cross your fingers for me that Mama N. doesn't screw me over with a Weather Event somewhere between here and the sunshine state that will prevent me actually getting there.  I don't trust her.
Posted by Kristin @ Going Country at 3:21 AM 6 comments:

More Travels. And a Surprise.

When we left The Family Blackrock, they had done D.C. (well, two places in D.C., anyway) and were gearing up for the long drive home.  On Kristin's birthday.  Because what could be more celebratory of 32 years on this Earth than driving for many hours in the backseat of a car while entertaining a toddler?  I'll tell you what.  Stopping in the middle to tour Longwood Gardens.


Longwood Gardens was the summer home of the extraordinarily wealthy du Pont family.  It is now a non-profit organization dedicated to preserving the property and its absolutely astounding gardens.  A. has been there a couple of times, and has always wanted to take me there.  It's about 30 miles from Philadelphia, and not entirely on our way home from D.C., but close enough that not going would have been foolish.

Even in the middle of winter, there is plenty to see at Longwood Gardens.  And that is because of the Conservatory, a.k.a. the biggest damn greenhouse I have ever seen. 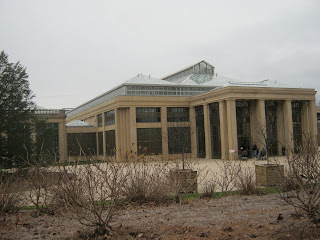 And a different view, with A. and Cubby for scale. 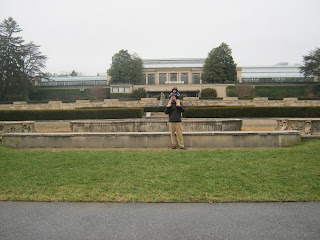 And inside the Conservatory, there were many, many Christmas trees: 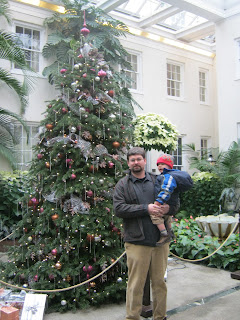 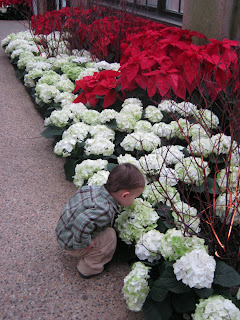 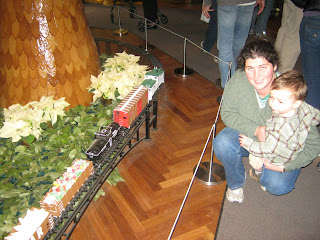 And a children's garden that mostly included a whole hell of a lot of water features that rendered Cubby's shirt soaking wet by the time we left.  Didn't matter, though.  He had a great time. 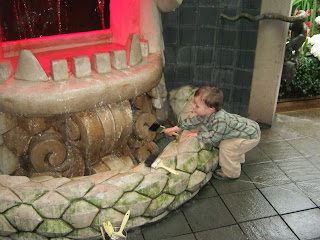 It started to rain just as we left the Conservatory, so we didn't see much else, but just that and the house on the grounds took over two hours to see.  In the summer, when all the fountains are going and the outdoor gardens are at their peak, it would take days to walk around this place and see everything properly.

Although I'm not a huge student of trees--or, okay, a student at all of trees--A. is, and he kept pointing out to me examples of trees that I'm familiar with but would never have recognized because they were HUUUUGE.  Longwood Gardens is actually the home to many of the country's oldest and biggest trees of several varieties.  Magnolias so big they looked like oaks, yew trees so enormous they could be mistaken for pine trees, and on and on and on.  Nothing has been cut down there, pretty much ever, so all the trees have just grown for hundreds of years.  It's a rare thing in this country to see, and very impressive.

In sum, I was completely blown away by Longwood Gardens and would recommend that anyone who finds themselves in even the remote vicinity find a way to see it.  Truly, one of the most magnificent things I've ever seen.

Not such a bad birthday, after all.

And now that I've finally told you all about the last trip we took, perhaps I should inform you that I'm leaving again tomorrow.  I'm going to Arizona to go to my sister's bridal shower.  By myself.

I'll allow that last bit to sink in for a second.

By myself, without husband or son.  This will mark the first time in Cubby's almost two years that I've ever been away from him for longer than a few hours.  I am both incredibly excited and unbearably sad at the prospect.  Not that he'll be lacking for tender loving care, with the combined efforts of his father and grandmother, but still.

I won't think about the missing him part yet.  Instead I will focus on the fact that I will not have to worry about anyone's bodily functions (except, uh, my own, that is) for five whole days.  A heady thought, indeed.

I leave tomorrow morning and get back late Sunday night.  I'm sure I will be sending a shout-out from my parents' house at some point in the next several days, but who knows when and what I'll have to say.  Maybe without the constant companionship of my own small dictator, I'll find I have nothing to talk about.

So hasta luego, poppets!  Catch you on the west side.
Posted by Kristin @ Going Country at 3:48 AM 6 comments:

Labels: all about me, Cubby, family, the A team, travelin'

I Am Obviously All About the Promptness

You don't come here for up-to-the-minute, in-depth reporting, do you?  I hope not, because I'm sure you're sadly disappointed if that is the case.

Case in point:  Hey, let's talk about that trip I returned from a week ago!  Because I know you were DYING to hear about it and see the pictures.

Maybe not, but onward nonetheless.

Christmas Eve in the morning at my sister's we did our present opening and such, because N.N. was leaving that afternoon to spend Christmas with her mom.  After she and her father left for the airport, A., my sister, and I took Cubby to the Smithsonian National Museum of Natural History.  We figured Cubby would go crazy about all the stuffed animals (taxidermy stuffed, not teddy-bear stuffed).

He did.  Go crazy, that is.  That child literally went INSANE for the first half an hour or so we were there.  He was just running at full speed through enormous crowds of people, and then periodically falling to his stomach in the middle of the floor, as if he just couldn't take the excitement and needed a break on his face for awhile.  In the middle of the heaviest foot traffic he's ever encountered in his young life.

This is why there are no photos of him at the museum.  He was moving too fast to be captured on camera, and I was too busy trying to keep him out of the way of the holiday crowds.

He got a little hysterical, if I'm to be truthful.  Eventually we found a relatively quiet room with some seats, in which we sat while he ate some almonds and cruised around looking at the skeletons of various birds and things.  After that, he was calmer and a little more able to take things in.  Though he hit the wall about two hours in and was practically catatonic by the time we left half an hour after that.

He enjoyed it, though, and made his father very proud by identifying a lemur.  Clearly a prodigy.

Christmas Day, after church and a very large meal, we spent a lot of time sitting in my future brother-in-law's vintage (is that the right word for a 70's-era vehicle?) Jeep Scrambler. 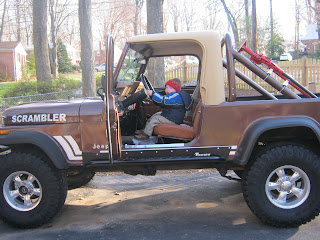 Do not even attempt to remove this child from the driver's seat.  He will be ENRAGED.  Trust me.  I speak from experience.

And we went to a marina on the Potomac River to hang out on the grass and eat some apples. 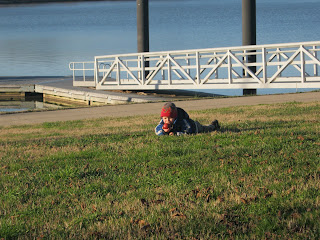 He also enjoyed the National Zoo--also a part of the Smithsonian Institution--that we went to the day after Christmas.  He was significantly less hysterical at the zoo, and so I do have some photos of that. 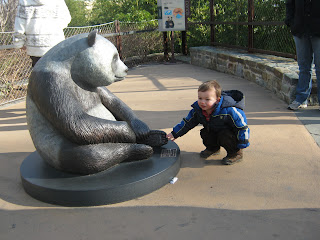 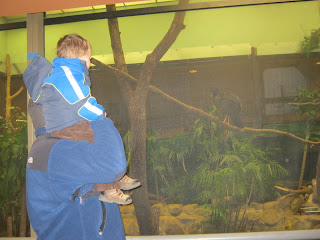 Riding on his soon-to-be uncle's extremely high and broad shoulders . . . 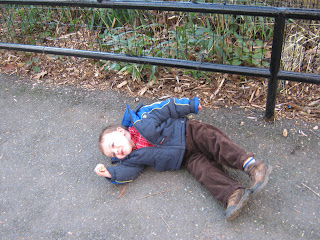 And, of course, rolling around on the ground.  Are you sensing a theme here?

Incidentally, that last picture was right outside the bobcat enclosure.  This was pretty much the highlight of Cubby's zoo experience, because the bobcats were enjoying a rabbit snack when we got there.  We stood there for several minutes watching them gnaw on the bunnies while Cubby helpfully narrated the action, "Cat?  Eat?  Meat?  Rabbit?"

I think that's enough for now.  Tune in tomorrow for more pictures and the story of our visit to Longwood Gardens, which ranks right up there as one of the most fantastic places I've ever visited.

Happy New Year, my lovelies!  I hope you all had a fantastic New Year's Eve, doing whatever it is you most wished to do to ring in this new year.  In my case, that meant going to bed at 8 p.m.

But first, I had to procure some black eyed peas.

I have mentioned, at least twice, the southern tradition I follow of pork, greens, and black eyed peas on New Year's Day to ensure health, wealth, and happiness in the new year.  I'm not southern anymore--like, AT ALL--but my mom is, so it's my tradition too. Every year that I've been with A. (which is ten years this year, actually) and therefore not at my parents' house, I've made this meal in various forms for New Year's Day.  It is Tradition, with a capital T.

Obviously, that wasn't okay.  I'm not going to be the one responsible for unhappiness for all in my household just because I didn't pick up some spotted legumes.  Plus, it's a capital-T Tradition, man.  You don't just break a long-standing Tradition due to laziness or poor planning.  Dammit.

I had a plan to go to the Small City yesterday to get the black eyed peas, but due to various things not of my doing, I didn't get there. Which is why I was driving to the small market in the next village over at 6 p.m. last night in search of our happiness.  And I found it.  In a can.

I've never made black eyed peas from canned peas before, but it's the best I could do.  So this year, our happiness is coming in canned form.

Whatever.  I have my pork, greens, and black eyed peas.  Bring on the new year!  We're ready.
Posted by Kristin @ Going Country at 4:04 AM 4 comments: