Items of Specific and General Interest


First of specific interest (meaning for my mom).

As of yesterday, Jack can officially crawl. 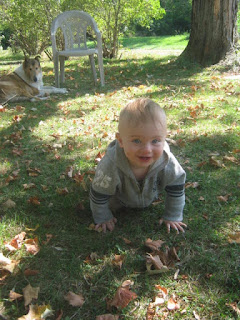 This development pleases him greatly.

And entirely uncoincidentally, he has also been sleeping for a nine-hour stretch for the past couple of nights. The electrical outlets are no longer safe, but I'll take constant vigilance over sleep-walking through my day.

And now for the general interest item . . .

Charlie spotted a white caterpillar on the picnic table outside while we were eating our lunch in the kitchen. We went out for a closer look and I told him we would look it up and try to identify it.

Do you see the "Do Not Touch" sign? No? It should really have one.*

Turns out it was a Hickory Tussock Moth caterpillar, and that those particular caterpillars are kind of venomous. Venomous enough to produce symptoms similar to poison ivy, anyway, which is definitely a bummer. Good thing we didn't touch it.

So if you ever see a fuzzy white caterpillar with black spots running down the center of its body and little spiky hairs, don't touch it.

* You can probably tell from the quality of the photo that I did not take it. It's from this University of Wisconsin website.
Posted by Kristin @ Going Country at 12:01 PM 2 comments:

I was out on the front lawn with Charlie yesterday afternoon when I noticed an enormous branch that had broken off and gotten hung up on a maple tree. The jagged end of the branch was pointing straight down about five feet off the ground, very close to the horse chestnut tree that Charlie and Cubby have been playing under lately.

I had a vision of two small boys I know whacking that branch with sticks and it crashing down on them, possibly impaling one of them with that jagged end.

So I told Charlie to stand over by the driveway while I investigated closer and determined whether it was securely lodged in the tree or just swaying precariously up there.

Here's where I caution you to not do what I did.

What I should have done was gotten a long rope to toss around the branch and yank on it from a safe distance. What I actually did was walk right up to it, grab it with my hand, and yank on it to see how secure it was.

It was not secure.

It came crashing down immediately. Thankfully, not on top of my stupid head, because the bulk of it was in front of me. It did, however, wrench my right shoulder* pretty good, scrape up my whole left forearm, and leave a few deeper gouges in both hands.

But at least it didn't kill or maim one of the children, right? Right. Idiot.

My injuries are mostly superficial and not worth mentioning (except I just mentioned them in about, uh, six paragraphs), besides the fact that they are going to make it hard to deal with all the peaches I have.

No, not the peaches in the bushel basket. Those are already pureed and in the freezer. I now have the same amount of peaches again, because our Very Elderly Neighbor called on Sunday and said he had more I could come pick up and . . . well, I'm a sucker, I guess. And a glutton for punishment.

Peeling all those nice acidic peaches with cuts all over my hands will probably be pretty punishing, but we're going to be all set for peach yogurt this winter.

Maybe this time I'll be smarter than my branch-pulling self and wear gloves. Maybe.

* Luckily, it was not the shoulder I use to carry Jack around. I found out at the doctor's office yesterday that he weighs 22.5 pounds, which is a lot to be hauling around even with an uninjured shoulder. He is also 31 inches long. That is insane for a nine-month-old.
Posted by Kristin @ Going Country at 8:00 AM 3 comments:

Labels: all about me, country livin', fun with food, Jack, randomness, stupidity

Cubby's school is Monday through Thursday. Charlie's preschool is Tuesday, Wednesday, and Thursday mornings. Their schools are a half mile apart, and I drive them both to school in the mornings. So three days a week, I drop them both off--Cubby first, then Charlie. On Mondays, however, it's just Cubby. On this particular Monday, when I announced it was time to go to school, here's what went down:

Me: Cubby, get your boots on. Charlie, you don't have school today.

Charlie: Yes, I do! I'm going to school!

Me: Cubby, you're going. Charlie, you don't have school today.

Cubby: NO! I HATE SCHOOL! I'M NOT GOING!

Me: EVERYONE GET YOUR BOOTS ON AND GET IN THE VAN.

And then I woke Jack from a sound sleep to put him in the van too.

Just about as fun as it sounds, yes.

Thankfully, when we got Cubby to school he didn't stage any protests. And Charlie forgot about school when I suggested we should come home and have some toast.

Still, let's hope we don't repeat this every Monday morning.

* Upon questioning, he stated that there are too many rules (never thought I'd hear rule-obsessed Cubby say that) and they don't play enough. It's a rough transition from playtime preschool to real school.
Posted by Kristin @ Going Country at 7:03 AM 2 comments: