Long version: This was Poppy's birthday dinner. She didn't actually request anything, so I just made what I was planning on making anyway. She did request chocolate cake. I made Grandma Bishop's Chocolate Cake--which at this point should probably be called Great-Great-Grandma Bishop's Chocolate Cake, given her actual relationship to this generation--and then Poppy ate nothing but the ice cream in her bowl.

Oh well. It's the thought that counts. And I was happy to finish her cake for her.

I didn't get a picture of the cake, but it was one of my classic Ugly Cakes, with the bonus of Ugly Candles because I couldn't find the birthday candles and instead had to use a random emergency candle and someone's baptism candle. 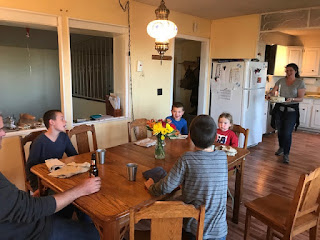 Good thing I only needed two candles, because that's all I had.

Long version: My plan for this night was pizza, but then we went to the canyon and by the time I got home there wasn't enough time to get the pizza all done for that night. So what I did was get the dough pre-baked, and then I shoved it in the refrigerator until the next night.

Meanwhile, I re-purposed the elk roast from a few days before into a stew with potatoes, carrots, and peas. Those who didn't want the stew had leftover meatballs. 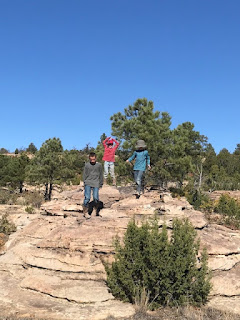 There were a lot of calories to be replaced after hours of running up and down rocks.

My sister was still visiting, and I paid her the honor of not even worrying about the fact that I was serving leftovers for dinner to a guest. I also didn't worry too much about keeping the house completely picked up while she was here. She might wish I treated her more like a guest, actually.

Long version: The pizzas came out well, despite the delay in their final baking.

Long version: The garlic bread I actually pre-baked along with the pizza crusts on Saturday, so when I got home from work, all I needed to do was put it back in a hot oven for about fifteen minutes.

I neglected to take out any meat to thaw before I left for the day, so instead I pulled out leftover elk stew, chicken taco meat, and roasted vegetables and made various combinations of those for dinner, plus the omelet for A.

It all worked out.

Long version: I seem to have neglected to serve a vegetable. Oh well. The chili had plenty of tomatoes in it. Good enough.

Long version: It's only in the last year that I've started buying cereal*, and so it is only recently that I have realized how useful cereal bags are. I use them to put bread in the freezer, store cheese after it's been cut, and, in this case, shake chicken in corn flour. They're such wonderfully sturdy bags. And since I've already paid for them and have to throw them away, it makes me feel better to get another use out of them.

It was cold and snowy this day, so much so that Cubby and Charlie were released early from school. 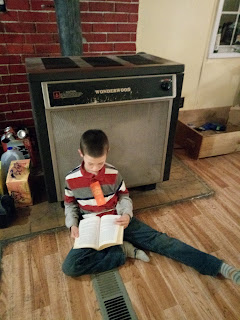 Giving them more time to read by the woodstove.

* I instituted Sunday Cereal when we moved here, because church starts at 8 a.m., and it's hard enough to get everyone there on time without worrying about cooking breakfast. So everyone gets two bowls  of (store-brand) Rice Krispies on Sunday mornings. Whee.