We went for a family hike this morning in some very nice pine woods. Jack was in the pack; Mia was with us; it was all fine family fun. Cubby and Charlie were trotting along quite merrily with their sticks, until it warmed up and we got to a different kind of forest (more hardwoods than evergreens) and the bugs started, well, bugging us. Cubby and Charlie got fussy about the bugs--probably also they were just tired at that point--so we turned around to come home.

A. suggested that perhaps they would like to run barefoot on the path on the way back. Most of the path was heavily covered with a nice springy layer of pine needles and they thought this was swell. A. decided to join them in their barefoot trail run, leaving Jack and me the only ones still with shoes.

After a brief stop at a stream to (fail to) catch minnows and frogs, eat some nuts and drink some water, we rallied the troops for the last half mile or so. Cubby and Charlie were not too pleased to press on. Jack was quite excited about running down the trail on his own tiny legs. He fell a lot, but seemed happy enough. Charlie was so unhappy and whiny and slow, I suggested to A. that maybe Charlie could ride in the pack, because I was ready to be out of those woods by then, thanks very much.

Charlie thought this was a great plan. Charlie is so skinny, A. couldn't even tell the difference between carrying him and carrying Jack. We continued on in this way for a little while, until Jack became too distracted by toxic berries and tree roots that wouldn't budge despite persistent pulling, and I scooped him up to speed up and catch up to the rest of the crew.

When I reached them, A. insisted on taking Jack and carrying him on his shoulders. Charlie was still in the pack, so A. basically stacked the two younger children and continued on. Still barefoot, remember. As was Cubby.

And then, just before we came to the trailhead, Mia dived into the brush and emerged with a twitching juvenile cottontail rabbit clenched in her jaws.

I spent the last ten minutes of the hike hoping fervently that we didn't encounter anyone else on the trail. Perhaps they might have looked askance at a barefoot man packing two children, trailed by a third barefoot child and a large dog with a dead rabbit in its mouth.

We finally made it back to the car, disposed of the rabbit (much to Cubby's voluble displeasure, but rabbits can have a lot of parasites in warm weather, so we thought we'd better not risk it), buckled everyone into their seats, and came home.

Fine family fun, indeed. For a family of woodchucks, anyway.

Labels: all about me, Charlie, country livin', Cubby, dogs, family, Jack, the A team, the great white north, wildlife


Since moving to this house, our dog Mia has been pretty chill. Though the woods around us are teeming with animals, none of them seem to venture anywhere near the house. Why would they, with all that space unspoiled by humans and our noise? And now that we no longer live on a busy road with runners and cyclists to monitor constantly, Mia is free to sleep 16 hours a day under the pine trees by the front porch.

That's why it was surprising to hear her start barking continuously at around 4:30 this morning from her bed on the enclosed porch. She did it long enough that A. got up to go out there. He didn't see or hear anything, and after seeing him, Mia seemed to consider her warning sufficient and went back to sleep.

One short hour later, Charlie was in our room to inform me his bed was wet. After dealing with that and getting him back into bed, I let Mia out of the enclosed porch and out the front door. She still seemed somewhat agitated, so I decided to go out with her. Just in case she saw something for real and decided to take off.

I was still tired and displeased about being awakened twice before I needed to be up, but then I walked onto the front porch and saw that the sun was just starting to rise, and the moon was still shining as brightly as if it were the middle of the night. 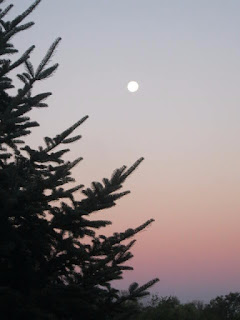 Photos of this sort of thing are always much less impressive than in real life, so you'll just have to trust me when I tell you it was quite spectacular.

So thanks to Mia the Brave and Charlie the Wet for making sure I was up and out to see that. It was a good start to the day, after all.

(And I didn't see anything alarming outside, either. You know I was thinking of that damned bear the whole time.)
Posted by Kristin @ Going Country at 4:23 AM 2 comments:

Labels: all about me, Charlie, country livin', dogs, the great white north

About a quarter-mile from our new house is a dirt road with basically no houses on it. This is very convenient, because it means that I can walk with all the kids to that road and they can run far ahead of me without worrying too much about cars. Cars are few and far between, and going pretty slow in any case because of the rocks on the road.

This also means we can take a walk without venturing into the woods. This is important, because the woods around here are no joke. They go for a long way with no interruption, and it's pretty easy to get lost in them. A. went into the woods across the street from our house with Cubby and Charlie last week, and even he got a little lost.

So, no woods for me, thanks.

But this dirt road is perfect. It's close enough that I can carry Jack home when he's had enough of walking. Mia and the children can run freely right down the middle. There are wild berry bushes along the side of the road for leisurely snacking. And the stop sign at the end of it is a perfect target for spear-throwing little boys.

As the child of a military officer, I was accustomed to moving every few years when I was young. It wasn't easy, of course, because what child likes being the new kid at multiple schools? But my mother in particular did everything she could to make it easier, anyway. One of the things she did was what she jokingly referred to in later years as "pimping for friends."

In an effort to make sure we knew some other kids as soon as possible, she would take us to the local playground or the pool, or go out into the street when all the neighborhood kids were out riding their bikes, identify some child that looked about the same age as me or one of my siblings, start talking to him or her, and then introduce us.

My mother is a naturally friendly person, and children in particular respond well to her, so she was often very successful in her pimping.

And now here I am, providing the same service for my own children. Almost every day I've taken the children to the local library, pool, or playground. I am not a naturally gregarious person, but for Cubby's sake in particular, I've been initiating conversations with any child I've seen who looks to be around six years old. We've met a few Cubby's age, but they've all been students in different school districts.

I really, really wanted Cubby to know at least one other child in his grade, though, because he's naturally shy and I knew knowing even one name would help him.

Today I had to go to the school to drop off some paperwork and I told Cubby and Charlie we could play on the playground there after I did that. Jack decided not to take a morning nap today, so we went somewhat earlier than I had planned. There were a few other children on the playground already, a couple of whom looked around Cubby's age. So as soon as we walked onto the playground, I asked the two adults standing around the ages of the children present.

One of the girls was six and would be in first grade at Cubby's new school.

Then I had to keep bringing Cubby over to where she was playing and finding things they might do together (like climbing the side-by-side chain ladders) or talk about. Luckily, she was a very friendly little girl, so she compensated for Cubby's shyness a little.

Even more luckily, her father told me that his mother was one of the first-grade teachers, and that lady showed up a few minutes later. I didn't know which of the two first-grade classes Cubby would be in, but I towed him over to her anyway, and started to introduce him. I got as far as, "We just moved here and my son might end up in your class . . ." when she interrupted with his name.

This was his teacher. She already knew his name (probably the only new kid in the grade, I'm guessing). She gave him a big hug, called him "honey" multiple times, and generally gave off the impression of being a woman who is very happy and enthusiastic about her job.

Cubby was too shy to talk to her much, but she'll be hearing enough from him in the coming year as he loosens up. Not a silent child as a rule, that Cubby.

So one child introduction and one teacher introduction, and still a few weeks before school begins. The family pimping tradition lives on. My mother will be so proud.
Posted by Kristin @ Going Country at 11:31 AM 2 comments:

Labels: all about me, Cubby, moving, school

Cubby has been very slow to lose any teeth--which appears to be genetic, because A. was, too--and even the tooth that has been loose for weeks now was reluctant to let go entirely. In fact, the new tooth grew in behind the loose tooth, which is not ideal.

Finally, after some effort, A. managed to pull the loose tooth out this evening. It was very exciting for everyone.

Okay, mostly if was exciting for Cubby, but we all cheered in solidarity.

Cubby asked me if he could keep the tooth. Sure, I said. Then he asked me if the Tooth Fairy would still bring him a present if he kept his tooth.

Sure, I said again. I make the rules, right? I mean, being the Boss Fairy and all. I told him he could leave a note with instructions if he was concerned. So he did. 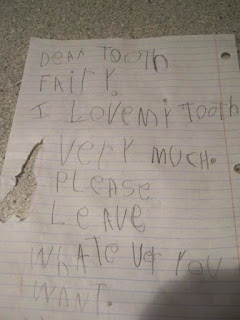 "Dear Tooth Fairy, I love my tooth very much. Please leave whatever you want."

The Tooth Fairy is going to leave a whole quarter. Because he used the magic word.